Military history of the Republic of Turkey

From Infogalactic: the planetary knowledge core
Jump to: navigation, search
For other uses, see Military history of Turkey (disambiguation).

The military history of Turkey is the history of the modern armed forces established under the Republic of Turkey, beginning with the Turkish War of Independence.

In 1938, the Turkish Army at peacetime strength consisted of 174,000 soldiers and 20,000 officers forming 11 army corps, 23 divisions, one armoured brigade, 3 cavalry brigades and 7 frontier commands.[1][2] It was ill-equipped with primarily World War I era weapons.[1] The rifles used were a mixture including Mausers, Mannlichers, Lee–Enfields, Martinis, Lebels and others.[2] As late as February 1940, the British Foreign Office noted: "The Turkish Army is very short of rifles and has asked us to supply 150,000".[2]

As for the air force, Turkey had 131 first line aircraft in 1937, of them only half were relatively modern.[2] Turkey hoped to increase its aircraft quantity to 300 by 1938.[2] Although Turkey had 300 trained pilots, they would be only rated moderate with little ability to fly in bad weather in a Western European Air Force.[2] In 1942, Ernest Phillips in his work Hitler's last Hope: A factual survey of the Middle East warzone and Turkey's vital strategic position admitted: "If the Germans were to stage an all out offensive in this area, they could bring more planes into the air than the Turks could even gather, and if we were to send too many from Libya to help Turkey, the weakness there would be such that we should be in difficulties on the other side of the Suez."[3] At the beginning of World War II the Turkish Air Force consisted of some 370 aircraft of all types, 450 pilots and 8,000 men.[4] During the war Turkey sent pilots to Great Britain for training purposes. 14 are known to have died in Great Britain.[5][6] One of them was shot down by a German plane during a training flight in British air space, the rest died in accidents. The daughter of former Air Forces Commander Emin Alpkaya, who had been sent to Britain for training during the war, stated she found something amazing while examining her father's wartime diaries. He wrote that "they have told me that I am ready to go to Berlin. I have returned from the bombardment at 6 in the morning. I was tired".[7] There were some allegations that Turkish pilots, who had been in Britain to get training during World War II, joined missions which bombed Berlin. However officials of the Turkish General Staff asserted that their pilots were never assigned in active aerial warfare and bombing flights.[5]

The Turkish Navy was the weakest of the services. It consisted of the outdated battle cruiser Yavuz (ex-Goeben), 4 destroyers, 5-6 submarines, 2 light cruisers, 3 mine-sweepers, 2 gunboats, 3 motor torpedo boats, 4 minelayers and a surveying vessel.[8][9] The personnel strength was approximately 800 officers and 4,000 men.[10] The Navy lacked all modern appliances for defending coasts and harbours, and the ships were defenceless against air attacks.[8] 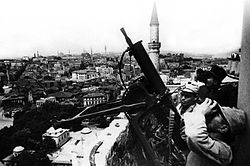 Turkish MG08 team on the minaret of the Hagia Sophia Museum, 1941.

During the Anglo-Turkish Treaty negotiations in September 1939 a military credit agreement amounting to £25 million was agreed upon.[11] A Turkish Ministry of Defence letter to the Turkish General Staff dating 22.03.1940 stated that the Turkish Army was to be increased to 1.3 million effectives forming 14 army corps consisting of 41 infantry and 3 cavalry divisions, 7 fortified positions and one armoured brigade.[11] Yet, the letter stated, "the material resources of the nation were unable to provide for the provisioning and transport of this large number of effectives".[12]

World War II broke out in the first year of the İsmet İnönü presidency, and both the Allies and the Axis started to put pressure on Inönü to bring Turkey into the war on their respective sides. The Germans sent Franz von Papen to Ankara, while Winston Churchill secretly met with Inönü inside a train wagon near Adana on January 30, 1943. Inönü later met with Franklin D. Roosevelt and Winston Churchill at the Second Cairo Conference on December 4–6, 1943. Turkey remained neutral until the final stages of World War II and tried to maintain an equal distance between both the Axis and the Allies until February 1945, when Turkey entered the war on the side of the Allies against Germany and Japan.

Until 1941, both Roosevelt and Churchill thought that continued Turkish neutrality would serve the interests of the Allies by blocking the Axis from reaching the strategic oil reserves of the Middle East. But the early victories of the Axis up to the end of 1942 caused Roosevelt and Churchill to re-evaluate a possible Turkish participation in the war on the side of the Allies. Turkey had maintained a decently-sized Army and Air Force throughout the war, and Churchill wanted the Turks to open a new front in the Balkans. Roosevelt, on the other hand, still believed that a Turkish attack would be too risky, and an eventual Turkish failure would have disastrous effects for the Allies. Inönü knew very well the hardships which his country had suffered during 11 years of incessant war between 1911 and 1922 and was determined to keep Turkey out of another war as long as he could. Inönü also wanted assurances on financial and military aid for Turkey, as well as a guarantee that the United States and the United Kingdom would stand beside Turkey in case of a Soviet invasion of the Turkish Straits after the war.

Main article: Turkish Brigade
File:Turkish Brigade Kunuri.jpg
Members of the Turkish Brigade move into position in December 1950, shortly after suffering severe casualties attempting to block encirclement of the US 2nd Division at the Chongchon River in North Korea.

During the Cold War, Turkey participated in the Korean War as a member state of the United Nations, suffering 731 deaths in combat. The fear of a Soviet invasion and Stalin's unconcealed desire to control the Turkish Straits eventually led Turkey to give up its principle of neutrality in foreign relations and join NATO on February 18, 1952. Following NATO membership, Turkey initiated a comprehensive modernization program for its Armed Forces.

See also: Military operations during the Invasion of Cyprus (1974)

In July 1974, the Turkish Armed Forces intervened (intervention was on July based on United Nations, on 15 of August 1974 when a ceased fired and negotiations was in place Turkish stop negotiations and perform the second act of invasion and occupied almost the 40% of the island, occupied since 1974 based on UN decisions) against a coup in Cyprus, organized by EOKA-B and led by Nikos Sampson who ousted the democratically elected Cypriot President Archbishop Makarios III in order to establish Enosis (Union) between Greece and Cyprus. The coup was backed by the Greek military junta in Athens. On 20 July 1974 the Turkish Army invaded the island from the north, landing in Pente Mili beach, near Keryneia. The operations (named Attila I and II) lasted until August and resulted in 37% of Cyprus territory coming under Turkish military control.[13] Turkey still maintains troops in Cyprus, since a political solution could not yet be achieved, and since many members of the Turkish Cypriot community fear a return to the intercommunal violence which occurred between 1963 and 1974.[14]

Towards the end of the 1980s, a restructuring and modernization process has been initiated by the Turkish Armed Forces, which still continues today. The final goal of Turkey is to produce indigenous military equipment and to become increasingly self-sufficient in terms of military technologies.

The Turkish Navy participated with five ships and one submarine in the NATO-led naval blockade to enforce the arms embargo. It additionally provided six F-16 Fighting Falcon jets for aerial operations. On 24 March 2011, Turkey's parliament approved Turkish participation in military operations in Libya, including enforcing the NFZ in Libya. The airbases committed were Incirlik and İzmir.