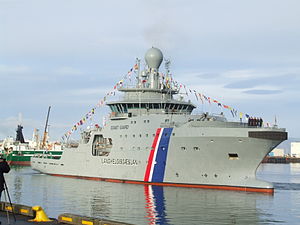 Iceland's defences consist of the Icelandic Coast Guard, which patrols Icelandic waters and airspace, and other services such as the National Commissioner's National Security and Special Forces Units.[1][2][3][4] Iceland is however the only NATO member which maintains no standing army, although there is no legal impediment to forming one and Icelandic services perform the operations fellow NATO allies relegate to their standing armies.

Units subordinated to the National Commissioner also take part in Iceland's defences. Foremost of these are the National Security Unit, which handles intelligence operations and the special unit Víkingasveitin, a highly trained and equipped counter terrorism unit which is part of the National Police force.

Additionally there is a Crisis Response Unit (ICRU), operated by the Ministry for Foreign affairs, which is a small peacekeeping force that has been deployed internationally, since 2008. This unit also has an unarmed component.

Furthermore, there is a treaty with the United States regarding the defense of Iceland; the former maintained a military base known as Naval Air Station Keflavik before it was disestablished in 2006. There are also agreements about military and other security operations with Norway,[7][8] Denmark[9][10][11] and other NATO countries.

Iceland holds the annual NATO exercises entitled Northern Viking. The most recent exercises were held in 2011,[12] as well as the EOD exercise "Northern Challenge". In 1997 Iceland hosted its first Partnership for Peace (PfP) exercise, "Cooperative Safeguard", which is the only multilateral PfP exercise so far in which Russia has participated. Another major PfP exercise was hosted in 2000. Iceland has also contributed ICRU peacekeepers to SFOR, KFOR and ISAF.

The government of Iceland contributes financially to NATO's international overhead costs and recently has taken a more active role in NATO deliberations and planning. Iceland hosted the NATO Foreign Ministers' Meeting in Reykjavík in June 1987. Additionally Norway has agreed to grant Icelandic citizens the same eligibility as Norwegian citizens for military education in Norway and to serve as professional soldiers in the Norwegian Defence forces.[13] 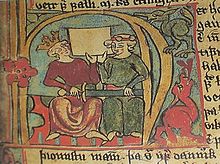 An illustration of Hákon Hákonarson, King of Norway, and Skúli Bárðarson from Flateyjarbók

In the period from the settlement of Iceland, in the 870s, until it became part of the realm of the Norwegian King, military defences of Iceland consisted of multiple chieftains (Goðar) and their free followers (þingmenn, bændur or liðsmenn) organised according to the standard Nordic military doctrine of the time in expeditionary armies such as the leiðangr. These armies were divided into units according to the quality of the warriors and by birth. At the end of this period the number of chieftains had diminished and their power had grown, to the detriment of their followers. This resulted in a long and bloody civil war known as Age of the Sturlungs. A typical battle involved fewer than 1000 men.

Amphibious operations were an important part of warfare in Iceland in this period, especially in the Westfjords, but large naval engagements were rare. The largest such engagement, known as Flóabardagi, involved a few dozen ships in Húnaflói (bay).

In the decades before the Napoleonic wars, the few hundred militiamen in the southwest of Iceland were mainly equipped with rusty and mostly obsolete medieval weaponry, including 16th century halberds. When English raiders arrived in 1808, after sinking or capturing most of the Danish-Norwegian Navy in the Battle of Copenhagen, the amount of gunpowder in Iceland was so small that the governor of Iceland, Count Trampe, could not offer any resistance. 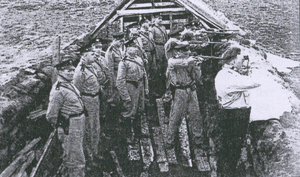 Officers of the defence force in a trench on Vaðlaheiði in 1940.

In 1855, the Icelandic Army was re-established by Andreas August von Kohl, the sheriff in Vestmannaeyjar. In 1856, the king provided 180 rixdollars to buy guns, and a further 200 rixdollars the following year. The sheriff became the Captain of the new army, which become known as Herfylkingin, "The Battalion". In 1860 von Kohl died, and Pétur Bjarnasen took over command. Nine years later Bjarnasen died without appointing a successor, and the army fell into disarray. 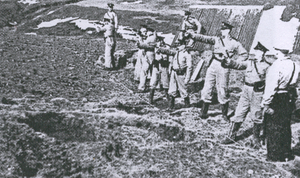 Agnar Kofoed Hansen training his officers in the arts of war in 1940.

In 1918 Iceland regained sovereignty as a separate kingdom under the Danish king. Iceland established a Coast Guard shortly afterwards, but it was financially impossible to establish a standing army. The government hoped that a permanent neutrality would shield the country from invasion. But at the onset of Second World War, the government was concerned about a possible invasion, and decided to expand the Icelandic National Police (Ríkislögreglan) and its reserves into a military unit. Chief Commissioner of Police Agnar Kofoed Hansen had been trained in the Danish Army and he moved to train his officers. Weapons and uniforms were acquired, and they practised rifleshooting and military tactics near Laugarvatn. Hansen barely managed to train his 60 officers before the United Kingdom's invasion of Iceland on 10 May 1940. The next planned step towards strengthening the army was to train the 300 strong reserve forces, but this was prevented by the invasion.

During the Second World War, the United States took over defense of Iceland from the British, and this arrangement continued well after the war, eventually codified in the Agreed Minute. Expansion was therefore concentrated primarily in the Icelandic Coast Guard, which saw action in a series of confrontations with British fishing vessels and warships known as the Cod Wars.

After withdrawal of US forces in 2006, Iceland reorganized some military functions in the form of the Icelandic Defence Agency (Varnarmálastofnun Íslands) founded in 2008.[14] under the Minister for Foreign Affairs. The Agency took over operations at Naval Air Station Keflavik, but was closed in 2011 in the wake of the economic crisis, with functions distributed to the existing organizations. [15] 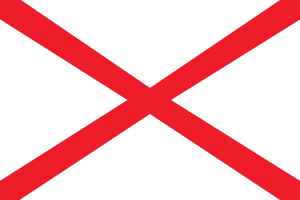 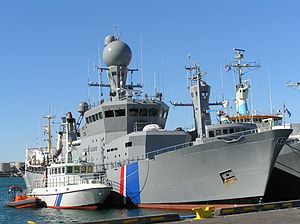 Shortly after Iceland reclaimed its sovereignty in 1918, the Icelandic Coast Guard was founded. Its first vessel, a former Danish research vessel, was armed with a 57 mm cannon. The Coast Guard is responsible for protecting Iceland's sovereignty and vital interests including the most valuable natural resource—its fishing areas—as well as providing security, search, and rescue services to Iceland's fishing fleet. In 1952, 1958, 1972, and 1975, the government progressively expanded Iceland's exclusive economic zone to 4, 12, 50 and then 200 nautical miles (370 km). This led to a conflict with the United Kingdom, among other states, known as the "Cod Wars". The Icelandic Coast Guard and the Royal Navy confronted each other on several occasions during these years. Although few rounds were fired, there were many intense moments. Today the Coast Guard remains Iceland's premier fighting force equipped with armed patrol vessels and aircraft and partaking in peacekeeping operations in foreign lands.

The Coast Guard has four vessels and four aircraft (one fixed wing and three helicopters) at their disposal.

Structure of the Icelandic Forces

The Iceland Air Defence System or Íslenska Loftvarnarkerfið was founded in 1987, and operates four radar complexes, a software and support facility and a command and report centre. It is a part of the Coast Guard.

The Icelandic Crisis Response Unit (ICRU) (or Íslenska friðargæslan or "The Icelandic Peacekeeping Guard") is an expeditionary peacekeeping force maintained by the Ministry for Foreign Affairs. It is manned by personnel from Iceland's other services, armed or not, including the National Police, Coast Guard, Emergency Services and Health-care system. Because of the military nature of most of the ICRU's assignments, all of its members receive basic infantry combat training. This training has often been conducted by the Norwegian Army, but the Coast Guard and the Special forces are also assigned to train the ICRU.

Most of the ICRU's camouflage and weaponry is procured from abroad, with some indigenous development. Some arms and uniforms are also borrowed from the Norwegian Defence Forces.

The formation and employment of the unit has met controversy in Iceland, especially by people to the left on the political scale. In October 2004 three ICRU soldiers were wounded in a suicide bombing in Kabul. The incident led to tough questioning of the group's commander, Colonel Halli Sigurðsson, focusing on his conduct .[citation needed] Later the command was passed to Colonel Lárus Atlason.

In 2008 the portion of uniformed ICRU deployed personnel still armed for self-defense returned their weapons and changed to civilian clothing. The policy since 2008 is that, unless under special circumstances, ICRU personnel do not wear uniforms or carry weapons.

The ICRU has or is operating in: