The Moldovan Armed Forces consist of the Ground Forces and Air and Air Defense Forces. 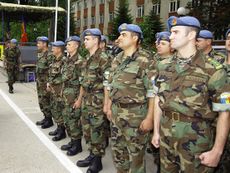 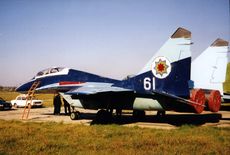 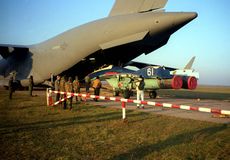 Moldova has accepted all relevant arms control obligations of the former Soviet Union. On October 30, 1992, Moldova ratified the Treaty on Conventional Armed Forces in Europe, which establishes comprehensive limits on key categories of conventional military equipment and provides for the destruction of weapons in excess of those limits. It acceded to the provisions of the nuclear Non-Proliferation Treaty in October 1994 in Washington, DC. It does not have nuclear, biological, or chemical weapons.

A transition to a professional force of 12,000 to 15,000 volunteers was planned at first, but when fighting erupted in 1991 between supporters of the central government in Chișinău and supporters of separatist regions, males between eighteen and forty years of age were mobilized, and the size of Moldova's military was temporarily expanded to meet the demands of the Transnistrian conflict.[1] In early 1995, the armed forces totaled some 11,000 volunteers, and there were plans to gradually create a professional army, similar to that of the United States.

At the beginning of 1994, the Moldovan Ground Forces (under the Ministry of Defense) consisted of 9,800 men organized into three motor rifle brigades, one artillery brigade, and one reconnaissance/assault battalion.[1] Its equipment consisted of fifty-six ballistic missile defenses; seventy-seven armored personnel carriers and sixty-seven "look-alikes;"[clarification needed] eighteen 122 mm and fifty-three 152 mm towed artillery units; nine 120 mm combined guns/mortars; seventy AT-4 Spigot, nineteen AT-5 Spandrel, and twenty-seven AT-6 Spiral anti-tank guided weapons; one hundred thirty-eight 73 mm SPG-9 recoilless launcher, forty-five MT-12 100 mm anti-tank guns; and thirty ZU-23 23 mm and twelve S-60 57 mm air defense guns. Moldova has received some arms from former Soviet stocks maintained on the territory of the republic as well as undetermined quantities of arms from Romania, particularly at the height of the fighting with Transnistria.

By 2006-7, the Moldovan Ground Forces had been reduced to a strength of 5,710, including three motor rifle brigades, one artillery brigade, and independent SF and engineer battalions, plus an independent guard unit. Equipment included 44 BMD-1 AIFV, and 266 APCs, including 91 TAB-71s, as well as 227 artillery pieces.[2]

Twenty-one of the MiG-29s were sold to the United States in October 1997 to prevent their sale on the world market, and for research purposes. All the spare parts for those aircraft were also purchased, as were the accompanying 500 air-to-air missiles. [4] All the aircraft were transported from Moldova to the National Air Intelligence Center (NAIC) at Wright-Patterson Air Force Base near Dayton, Ohio in C-17 Globemaster III transport planes over a period of two weeks.[5]

Other military forces also existed within Moldova. In early 1994, the government of the "Dnestr Republic" had armed forces of about 5,000 which included the Dnestr battalion of the Republic Guard and some 1,000 cossacks.[1]

As of early 1994, the former Soviet 14th Guards Army (about 9,200 troops) consisted of one army headquarters, the 59th Motor Rifle Division, one tank battalion, one artillery regiment, and one anti-aircraft brigade. Their equipment consisted of 120 main battle tanks, 180 armoured fighting vehicles, and 130 artillery/multiple rocket launchers/mortars.

By 2007 the now-Russian force, now designated the Operational Group of Russian Forces in Moldova, under the command of the Moscow Military District had withered away to a strength of some 1500 which included two motor rifle battalions, and independent security and support battalion, a helicopter detachment and several smaller administrative detachments.