Military of the Czech Republic

The Army of the Czech Republic (Czech: Armáda České republiky) comprise the Czech Land Forces, the Czech Air Force and support units. From the late 1940s to 1989, the extensive Czechoslovak Armed Forces (about 200,000) formed one of the pillars of the Warsaw Pact military alliance. After the dissolution of Czechoslovakia, the Czech Republic is completing a major reorganisation and reduction of the armed forces, which intensified after the Czech Republic joined NATO on 12 March 1999.[15]

Following the downfall of Czechoslovakia and occupation of its Czech part by Nazi Germany in 1939, a number of Czechoslovak units and formations served with the Polish Army (Czechoslovak Legion), the French Army, the Royal Air Force, the British Army (the 1st Czechoslovak Armoured Brigade), and the Red Army (I Corps). Four Czech and Slovak-manned RAF squadrons were transferred to Czechoslovak control in late 1945. 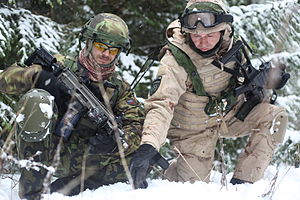 From 1954[citation needed] until 1990, the Army was known as the Czechoslovak People's Army (ČSLA).[16] Although the ČSLA, as formed in 1945, included both Soviet- and British-equipped/trained expatriate troops, the "Western" soldiers had been purged from the ČSLA after 1948 when the communists took power. The ČSLA offered no resistance to the invasion mounted by the Soviets in 1968 in reaction to the "Prague Spring", and was extensively reorganized by the Soviets following the re-imposition of conservative communist rule in Prague.

"Of the approximately 201,000 personnel on active duty in the ČSLA in 1987, about 145,000, or about 72 percent, served in the ground forces (commonly referred to as the army. About 100,000 of these were conscripts."[17] There were two military districts, Western and Eastern. A 1989 listing of forces shows two Czechoslovak armies in the west, the 1st at Příbram with one tank division and three motor rifle divisions, the 4th at Písek with two tank divisions and two motor rifle divisions. In the Eastern Military District, there were two tank divisions, the 13th and 14th, with a supervisory headquarters at Trenčín in the Slovak part of the country.[18]

During the Cold War, the ČSLA was equipped primarily with Soviet arms, although certain arms like the OT-64 SKOT armored personnel carrier, the L-29 Delfín and L-39 Albatros aircraft, the P-27 Pancéřovka antitank rocket launcher, the vz. 58 assault rifle or the Uk vz. 59 machine gun were of Czechoslovak design.

After 1992 (dissolution of Czechoslovakia) 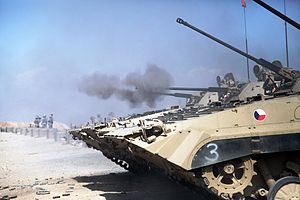 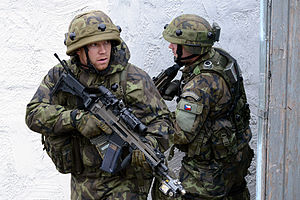 The Army of the Czech Republic was formed after the Czechoslovak Armed Forces split after the 1 January 1993 dissolution of Czechoslovakia. Czech forces stood at 90,000 in 1993. They were reduced to around 65,000 in 11 combat brigades and the Air Force in 1997, to 63,601 in 1999,[19] and to 35,000 in 2005. At the same time, the forces were modernized and reoriented towards a defensive posture. In 2004, the army transformed itself into a fully professional organization and compulsory military service was abolished. The Army maintains an active reserve.

The Czech Republic is a member of the United Nations and the Organization for Security and Co-operation in Europe. Since 1990, the ACR and the Czech Armed Forces have contributed to numerous peacekeeping and humanitarian operations, including IFOR, SFOR, and EUFOR Althea in Bosnia, Desert Shield/Desert Storm, Afghanistan, Kosovo, Albania, Turkey, Pakistan and with the Coalition forces in Iraq.

In February 2010, Czech media started to speculate about possible corruption around the purchase of Pandur II vehicles for the Czech Army.[20]

At present, the military of the Czech Republic is considered heavily underfunded, with too few armoured vehicles and aircraft, and even shortages of ammunition for infantry weapons. Some military equipment for the infantry has been purchased in civilian shops by personal expenditures of soldiers.[21] The government announced an increase of the budget for the military, depending on the growth of the economy.[citation needed]

Structure of the Czech Armed Forces. Click to expand. 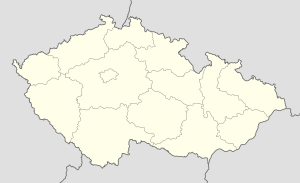 Structure of the Czech Armed Forces consists of three parts:[22]

The 153rd Engineer Battalion based in Olomouc was created on 15 October 2008 and is subordinated to the 15th Engineer Regiment. The unit is stationed in the outskirts of the city of Olomouc, in place of the canceled 156th Rescue Battalion.[23]

Active Reserve (in Czech Aktivní záloha) is a part of the otherwise professional Army of the Czech Republic. This service was created to allow the participation of citizens with a positive attitude to the military.

A volunteer needs either to have completed the compulsory military service (which ended in 2004) or to attend 8 week training. Then the reservists have to serve up to three weeks a year and can be called up to serve two weeks during a non-military crisis. They are not intended to serve abroad. The Reserve presents itself on events like BAHNA, a military show. 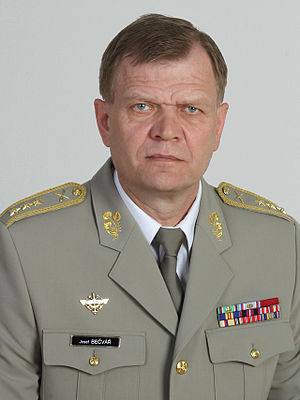 The current Chief of the General Staff of the Military of the Czech Republic Josef Bečvář.

These are the military ranks, historic and present-day, of the Armed Forces of the Czech Republic and its predecessor force, the Czechoslovak Armed Forces, later known as the People's Army.