File:MapleMill.jpg
Oldham in Greater Manchester, England, is an archetypal British "mill town". Oldham is home to many historic cotton mills which together were its largest source of work. Today the wider fashion and sportswear industries employ a small minority of Oldham's population.

In the United Kingdom, the term "mill town" usually refers to the 19th century textile manufacturing towns of northern England and the Scottish Lowlands, particularly those in Lancashire (cotton) and Yorkshire (wool).

Some former mill towns have a symbol of the textile industry in their town badge. Some towns may have statues dedicated to textile workers (e.g. Colne [1]) or have a symbol in the badge of local schools (e.g. Ossett School).

The list below includes some towns where textiles was not the predominant industry. For example, mining was a key industry in Wigan and Leigh in Greater Manchester, and in Ossett in Yorkshire.

In thousands of spindles. [1]

On his tour of northern England in 1849, Scottish publisher Angus Reach said:

In general, these towns wear a monotonous sameness of aspect, physical and moral... In fact, the social condition of the different town populations is almost as much alike as the material appearance of the tall chimneys under which they live. Here and there the height of the latter may differ by a few rounds of brick, but in all essential respects, a description of one is a description of all.[2]

Beginning with technological information smuggled out of England by Francis Cabot Lowell, large mills were established in New England in the early to mid 19th century. Mill towns, sometimes planned, built and owned as a company town, grew in the shadow of the industries. The region became a manufacturing powerhouse along rivers like the Housatonic, Quinebaug, Shetucket, Blackstone, Merrimack, Nashua, Cocheco, Saco, Androscoggin, Kennebec or Winooski.

In the 20th century, alternatives to water power were developed, and it became more profitable for companies to manufacture textiles in southern states where cotton was grown and winters did not require significant heating costs. Finally, the Great Depression acted as a catalyst that sent several struggling New England firms into bankruptcy. 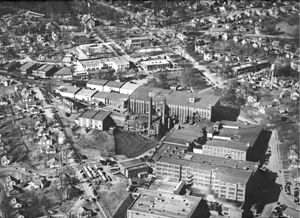