From Infogalactic: the planetary knowledge core
Jump to: navigation, search
Not to be confused with Rally 1000 Miglia.

The Mille Miglia (Italian pronunciation: [ˈmille ˈmiʎʎa], Thousand Miles) was an open-road endurance race which took place in Italy twenty-four times from 1927 to 1957 (thirteen before the war, eleven from 1947).

From 1953 until 1957, the Mille Miglia was also a round of the World Sports Car Championship.

Since 1977, the "Mille Miglia" has been reborn as a regularity race for classic and vintage cars. Participation is limited to cars, produced no later than 1957, which had attended (or were registered) to the original race. The route (Brescia-Rome round trip) is similar to that of the original race, maintaining the point of departure / arrival in Viale Venezia in Brescia.

Unlike modern day rallying, where cars are released at one-minute intervals with the larger professional class cars going before the slower cars, in the Mille Miglia the smaller displacement slower cars started first. This made organisation simpler as marshals did not have to be on duty for as long a period and it minimised the period that roads had to be closed. From 1949, cars were assigned numbers according to their start time. For example, the 1955 Moss/Jenkinson car, #722, left Brescia at 07:22 (see below), while the first cars had started at 21:00 the previous day. In the early days of the race, even winners needed 16 hours or more, so most competitors had to start before midnight and arrived after dusk - if at all. 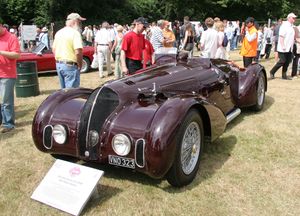 The race was established by the young Count Aymo Maggi and Franco Mazzotti, apparently in response to the Italian Grand Prix being moved from their home town of Brescia to Monza. Together with a group of wealthy associates, they chose a race from Brescia to Rome and back, a figure-eight shaped course of roughly 1500 km — or a thousand Roman miles. Later races followed twelve other routes of varying total lengths.

The first race started on 26 March 1927 with seventy-seven starters[2] — all Italian — of which fifty-one had reached the finishing post at Brescia by the end of the race.[2] The first Mille Miglia covered 1,618 km, corresponding to just over 1,005 modern miles.[2] Entry was strictly restricted to unmodified production cars, and the entrance fee was set at a nominal 1 lira.[2] The winner, Giuseppe Morandi,[2] completed the course in just under 21 hours 5 minutes, averaging nearly 78 km/h (48 mph) in his 2-litre OM;[2] Brescia based OM swept the top three places.

Tazio Nuvolari won the 1930 Mille Miglia in an Alfa Romeo 6C. Having started after his team-mate and rival Achille Varzi, Nuvolari was leading the race, but was still behind Varzi (holder of provisional second position) on the road. In the dim half-light of early dawn, Nuvolari tailed Varzi with his headlights off, thereby not being visible in the latter's rear-view mirrors. He then overtook Varzi on the straight roads approaching the finish at Brescia, by pulling alongside and flicking his headlights on.

The event was usually dominated by local Italian drivers and marques, but three races were won by foreign cars. The first one was in 1931, when German driver Rudolf Caracciola (famous in Grand Prix racing) and riding mechanic Wilhelm Sebastian won with their big supercharged Mercedes-Benz SSKL, averaging for the first time more than 100 km/h (63 mph)[2] in a Mille Miglia. Caracciola had received very little support from the factory due to the economic crisis at that time. He did not have enough mechanics to man all necessary service points. After performing a pit stop, they had to hurry across Italy, cutting the triangle-shaped course short in order to arrive in time before the race car.

The race was briefly stopped by Italian leader Benito Mussolini after an accident in 1938 killed a number of spectators. When it resumed in 1940 during war time, it was dubbed the Grand Prix of Brescia, and held on a 100 km (62 mi) short course in the plains of northern Italy that was lapped nine times.

This event saw the debut of the first Enzo Ferrari-owned marque AAC (Auto Avio Costruzioni) (with the Tipo 815). Despite being populated (due to the circumstances even more than usual) mainly by Italian makers, it was the aerodynamically improved BMW 328 driven by Germans Huschke von Hanstein/Walter Bäumer that won the high-speed race with an all-time high average of 166 km/h (103 mph).

The Italians continued to dominate their race after the war, now again on a single big lap through Italy. Mercedes made another good effort in 1952 with the underpowered Mercedes-Benz 300 SL Gullwing, scoring second with the German crew Karl Kling/Hans Klenk that later in the year would win the Carrera Panamericana. Caracciola, in a comeback attempt, was fourth.

Few other non-Italians managed podium finishes in the 1950s, among them Juan Manuel Fangio, Peter Collins and Wolfgang von Trips. In 1955, Mercedes made another attempt at winning the MM, this time with careful preparation and a more powerful car, the Mercedes-Benz 300 SLR which was based on the Formula One car (Mercedes-Benz W196), entirely different from their sports cars carrying the 300 SL name.

Both young German Hans Herrmann (who had a remarkable previous efforts with Porsche) and Briton Stirling Moss relied on the support of navigators while Juan Manuel Fangio (car #658) preferred to drive alone as usual, as he considered road races dangerous since his co-pilot was killed in South America. Karl Kling also drove alone, in the fourth Mercedes, #701.

Similar to his teammates, Moss and his navigator, motor race journalist Denis Jenkinson, ran a total of six reconnaissance laps beforehand, enabling "Jenks" to make course notes (pace notes) on a scroll of paper 18 ft (540cms) long that he read from and gave directions to Moss during the race by a coded system of 15 hand signals. Although this undoubtedly helped them, Moss's innate ability was clearly the predominant factor. Indeed, it should be noted that Moss was competing against drivers with a large amount of local knowledge of the route, so the reconnaissance laps were considered an equaliser, rather than an advantage.

Car #704 with Hans Herrmann and Hermann Eger was said to be fastest in the early stages, though. Herrmann already had a remarkable race in 1954, when the gate on a railroad crossing were lowered in the last moment before the fast train to Rome passed. Driving a very low Porsche 550 Spyder, Herrmann decided it was too late for a brake attempt anyway, knocked on the back of the helmet of his navigator Herbert Linge to make him duck, and they barely passed below the gates and before the train, to the surprise of the spectators. Herrmann was less lucky in 1955, having to abandon the race after a brake failure. Kling crashed also.

After 10 hours, 7 minutes and 48 seconds, Moss/Jenkinson arrived in Brescia in their Mercedes-Benz 300 SLR with the now famous #722, setting the event record at an average of 157.650 km/h (97.96 mph) which was fastest ever on this 1,597 km (992 mi) variant of the course, not to be beaten in the remaining two years. Fangio arrived a few minutes later in the #658 car, but having started 24 min earlier, it actually took him about 30 minutes longer, having engine problems at Pescara, through Rome and by the time Fangio reached Florence, a fuel injection pipe had broken and he was running on 7 cylinders.[3] 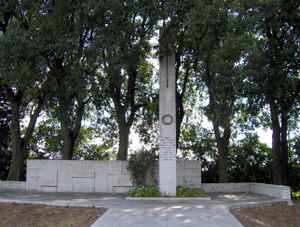 Memorial to victims of Mille Miglia where the fatal crash happened

The race was banned after two fatal crashes. The first was the crash of a 4.2-litre Ferrari 335 S in 1957 that took the lives of the Spanish driver Alfonso de Portago, his co-driver/navigator Edmund Nelson, and nine spectators, at the village of Guidizzolo.[2] The car supposedly landed on top of Portago and Nelson cutting them in half. Five of the spectators killed were children, all of whom were standing along the race course. Portago desperately wanted to win this race and waited too long to make a tyre change. The crash was caused by a worn tyre. The manufacturer was blamed and was sued for this, as was the Ferrari team.

A second car crash in Brescia took the life of Joseph Göttgens. He was driving a Triumph TR3, a lesser known driver Lord Herbert Spelsbury was also killed in the same incident, when his parked Mercedes (following a puncture) was hit from falling masonry from the road above.

From 1958 to 1961, the event resumed as a rallying-like round trip at legal speeds with a few special stages driven at full speed, but this was discontinued also.

Since 1977, the name was revived as the Mille Miglia Storica, a parade for pre-1957 cars that takes several days, which also spawned the 2007 documentary film Mille Miglia - The Spirit of a Legend.

Owner of trademark logo of Mille Miglia is the Automobile Club Brescia.

Mille Miglia is also the name of a jacket, named after the race, inspired by the 1920s racewear and designed by Massimo Osti for his CP Company clothing label. The garment features goggles built into the hood and originally had a small circular window in the sleeve enabling the wearer to see their watch. The jackets have been produced for a long period and are still popular with British football casuals.

As a sponsor and timekeeper of the Storica event, the event has lent its name and its trademark logo to Chopard for a series of sport watches. For promotions Chopard uses photographs from the event by photographer Giacomo Bretzel.

Mille Miglia Red is the name for a color used by Chevrolet on its Corvette models. The color was offered between 1972 and 1975.[5]

In 1982 the Mille Miglia endurance race was revived as a road rally event. 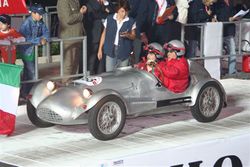 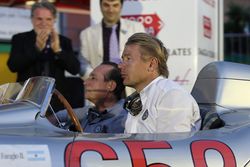 Since November 2004, the former Monastery of S. Eufemia at Brescia houses the Mille Miglia Museum, which illustrates the history of this car race with films, memorabilia, dresses, posters, and a number of classic cars that are periodically replaced by other in case of participation in events.