In particular, a family of lattice planes is determined by three integers h, k, and ℓ, the Miller indices. They are written (hkℓ), and denote the family of planes orthogonal to

because the reciprocal lattice vectors need not be mutually orthogonal.) By convention, negative integers are written with a bar, as in 3 for −3. The integers are usually written in lowest terms, i.e. their greatest common divisor should be 1.

There are also several related notations:[1]

In the context of crystal directions (not planes), the corresponding notations are:

Miller indices were introduced in 1839 by the British mineralogist William Hallowes Miller. The method was also historically known as the Millerian system, and the indices as Millerian,[2] although this is now rare.

There are two equivalent ways to define the meaning of the Miller indices:[1] via a point in the reciprocal lattice, or as the inverse intercepts along the lattice vectors. Both definitions are given below. In either case, one needs to choose the three lattice vectors a1, a2, and a3 that define the unit cell (note that the conventional unit cell may be larger than the primitive cell of the Bravais lattice, as the examples below illustrate). Given these, the three primitive reciprocal lattice vectors are also determined (denoted b1, b2, and b3).

Equivalently, (hkℓ) denotes a plane that intercepts the three points a1/h, a2/k, and a3/ℓ, or some multiple thereof. That is, the Miller indices are proportional to the inverses of the intercepts of the plane, in the basis of the lattice vectors. If one of the indices is zero, it means that the planes do not intersect that axis (the intercept is "at infinity").

Considering only (hkℓ) planes intersecting one or more lattice points (the lattice planes), the perpendicular distance d between adjacent lattice planes is related to the (shortest) reciprocal lattice vector orthogonal to the planes by the formula:

That is, it uses the direct lattice basis instead of the reciprocal lattice. Note that [hkℓ] is not generally normal to the (hkℓ) planes, except in a cubic lattice as described below.

For the special case of simple cubic crystals, the lattice vectors are orthogonal and of equal length (usually denoted a), as are those of the reciprocal lattice. Thus, in this common case, the Miller indices (hkℓ) and [hkℓ] both simply denote normals/directions in Cartesian coordinates.

For cubic crystals with lattice constant a, the spacing d between adjacent (hkℓ) lattice planes is (from above)

Because of the symmetry of cubic crystals, it is possible to change the place and sign of the integers and have equivalent directions and planes:

Case of hexagonal and rhombohedral structures 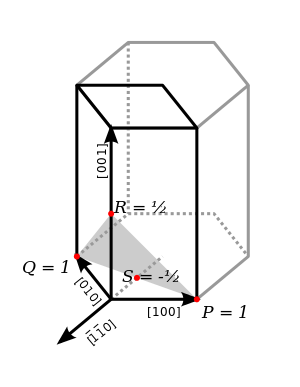 With hexagonal and rhombohedral lattice systems, it is possible to use the Bravais-Miller system, which uses four indices (h k i ℓ) that obey the constraint

Here h, k and ℓ are identical to the corresponding Miller indices, and i is a redundant index.

This four-index scheme for labeling planes in a hexagonal lattice makes permutation symmetries apparent. For example, the similarity between (110) ≡ (1120) and (120) ≡ (1210) is more obvious when the redundant index is shown.

There are also ad hoc schemes (e.g. in the transmission electron microscopy literature) for indexing hexagonal lattice vectors (rather than reciprocal lattice vectors or planes) with four indices. However they don't operate by similarly adding a redundant index to the regular three-index set.

. For hexagonal crystals this may be expressed in terms of direct-lattice basis-vectors a1, a2 and a3 as

. When four indices are used for the zone normal to plane (hkℓ), however, the literature often uses

instead.[3] Thus as you can see, four-index zone indices in square or angle brackets sometimes mix a single direct-lattice index on the right with reciprocal-lattice indices (normally in round or curly brackets) on the left.

For all these reasons, it is important to determine the planes and thus to have a notation system.

Ordinarily, Miller indices are always integers by definition, and this constraint is physically significant. To understand this, suppose that we allow a plane (abc) where the Miller "indices" a, b and c (defined as above) are not necessarily integers.

If a, b and c have rational ratios, then the same family of planes can be written in terms of integer indices (hkℓ) by scaling a, b and c appropriately: divide by the largest of the three numbers, and then multiply by the least common denominator. Thus, integer Miller indices implicitly include indices with all rational ratios. The reason why planes where the components (in the reciprocal-lattice basis) have rational ratios are of special interest is that these are the lattice planes: they are the only planes whose intersections with the crystal are 2d-periodic.

For a plane (abc) where a, b and c have irrational ratios, on the other hand, the intersection of the plane with the crystal is not periodic. It forms an aperiodic pattern known as a quasicrystal. This construction corresponds precisely to the standard "cut-and-project" method of defining a quasicrystal, using a plane with irrational-ratio Miller indices. (Although many quasicrystals, such as the Penrose tiling, are formed by "cuts" of periodic lattices in more than three dimensions, involving the intersection of more than one such hyperplane.)