Millom is a town and civil parish on the north shore of the estuary of the River Duddon around 7 miles north of Barrow-in-Furness in southwest Cumbria, England. Millom was constructed as a new town, beginning in 1866 and subsumed the village of Holborn Hill. Built around ironworks, the town grew to a size of over 10,000 people by the 1960s, but has struggled since the works were closed in 1968. Culturally, Millom is notable as the birthplace of poet Norman Nicholson, and as a major centre of amateur rugby league.

The name is Cumbrian dialect for "At the mills".[1] The town is accessible both by rail and an A class road. Historically in Cumberland, the parish had a population of 7,829 in 2011[2] and is divided into four wards, Holborn Hill, Newtown North, Newtown South and Haverigg.[3]

Millom is mentioned in the Domesday Book as one of the townships forming the Manor of Hougun held by Earl Tostig.[4]

Millom Castle is a grade I listed building and scheduled ancient monument which by 1739 was in dilapidated condition.[5]

In 1251 a market charter was granted by King Henry III of England to John de Huddleston, Lord of Millom. A charter for an Easter fair at Holy Trinity Church was also granted at the same time.[citation needed]

Millom is the most southerly town in the historic county of Cumberland.[6]

The Whitehaven & Furness Junction Railway opened a station here in 1850 known as 'Holborn Hill Halt', until Millom newtown was built in 1866. It was taken over by the Furness Railway in 1866.

A map of 1862 shows that all that existed here was a small hamlet by the name of Holborn Hill on the northwest side of the railway line. It had a railway station, inn and a tile and brick works.[7] By 1899 a small town had grown up here, with terraced streets on either side of the railway, a public library, police station, banks, hotels, school, market square and allotments.[8]

In the intervening years, the Hodbarrow iron mines began extracting haematite from deposits between the village of Holborn Hill and the seashore at Hodbarrow. The first shafts were sunk in the 1850s, by 1881 there were seven pits operated by The Hodbarrow Mining Company.[9] Millom & Askam Iron Company built Millom Ironworks and the first furnaces were completed in 1866. The opening of the iron works lead to the building of Millom newtown.[10] The Hodbarrow Outer Barrier (sea wall) was completed in 1905 to protect the mines from the sea. It took five years to construct at a cost of almost £600,000.[11] The Hodbarrow Mines and Millom Ironworks were closed in 1968. The town's population of 10,997 in 1967 fell to 7,101 by the 1971 census.[12]

In 1877 the expanding town needed more water and Whicham Beck was dammed at Baystone Bank (54.261226,-3.274237) to form Baystone Bank Reservoir. The reservoir remained in use until about 1996. It was drained in 2011, the dam removed and the valley returned to its original form. This work was carried out by water network company United Utilities.[13][14]

During the Second World War an airfield, RAF Millom, was developed on flat coastal land at Haverigg. This was an advanced flying training station, mainly for Observers and also Air Gunners. Aircraft stationed there were firstly the Blackburn Botha and Fairey Battle, then the more popular and successful Avro Anson.[15] Post-war this became the site of HM Prison Haverigg.

Throughout its history, the town has struggled with socio-economic problems, especially after the Industrial Revolution, thus being infamously called by the Mayor of Copeland, 'a place of despair'.[citation needed] However it was noted that the people who came to work in the mines in the late 1800s endured poor living conditions on the marshes that later became Millom New Town, with great fortitude and good humour. To this day Millomites exhibit the same attributes as their forefathers.

Millom has a town council and is part of the Borough of Copeland. With the local government changes of county boundaries in 1974, the administrative county of Cumberland was abolished and Millom formed part of the new county of Cumbria.

Millom's economy is now mainly based around retail, services and tourism.

It is a relatively low wage area, with a lot of people employed in skilled trades such as building, painting and decorating. Many also work in the service sector in hotels, pubs and shops within the nearby Lake District national park.

Higher wage centres are Barrow-in-Furness to the south and Sellafield to the north-west with commuting each way on the road or via the railway. There is also some commuting as far as Kendal.

Millom itself has a small town centre and does not offer much in the way of local employment, especially for young people. The prison at Haverigg, 2 miles away is the largest nearby employer.

There are 2 static caravan parks at Haverigg which provide some tourism income, and some holiday cottages also in Haverigg, mainly on the harbour front.

It owes it existence to the discovery of iron ore and the opening of mines and iron works in the 19th century. At the peak of production some half a million tons of iron ore were transported from here for smelting.[citation needed] By the 1970s the importance of this had declined and the town suffered economic depression. A film in the This England series was made about Millom and broadcast in 1979 by Granada Television.[citation needed]

Millom Palladium (a theatre, bar and full multi-functional venue) is a historic part of the town. Completed in 1911, it has stood on the site for over 100 years. This locally treasured building and entertainments venue is home to Millom Amateur Operatic Society (MAOS) founded in 1909 and is currently an ongoing project run and managed by a registered charity and group of volunteers with hopes to re-instate the cinema facility within the building. The facility currently hosts pantomime and music events and can be hired for weddings, balls, private parties etc. It has a full in-house 30KW PA with independent on stage monitor mixing and a full theatre Lighting system.

The Beggar's Theatre is a multi-function arts base with several activities, performing-arts based, for local talent and provides a venue for touring theatres, stand-up comedians etc. Run by Jakki Moore, the venue also offers a series of drama, dance and drumming workshops for children. They put on a summer arts festival every year.

Millom Network Centre, based in the grounds of Millom School, offers adult education, business and public meeting space, and other business services.

The town also has organisations providing services for the elderly in a number of venues. A number of sports organisations operate in the town; notably rugby and cricket as well as a thriving judo club. For the less physically active, a chess club exists as does a Scrabble club although both of these are currently dormant; lacking enthusiastic players.

The area has a number of pubs, a Conservative club, a working men's club and a nightclub. A travelling funfair visits annually around the end of September.

The Bear on the Square public house in the centre of Millom and 'The Plough' on Holborn Hill both serve food, and so do various cafés.

Millom is also home to the Hardknott microbrewery who have a bar at the train station serving their locally brewed beers.

St. George's Church stands proud within the town on a small hill and with its steeple is the biggest landmark of the town being visible from quite a distance.

The area's bigger landmark is the significant hill of Black Combe standing 1970 ft (600 m) above sea level. It forms a grand panoramic viewing platform of the south west Lake District area and offers view of England, Scotland, Ireland and Wales - but only on a clear day.

Millom Discovery Centre (previously known as 'Millom Folk Museum' and 'Millom Heritage Museum And Visitor Centre') presents a snapshot of past times in Millom, paying particular attention to the historical development of the area brought about by the significant iron ore mining and iron works.

Millom Rock Park is situated high on the north rim of the nearby Ghyll Scaur Quarry in the parish of Millom Without. A viewpoint in the Rock Park permits views into the working quarry and overlooks the processing machinery. There is an avenue of 15 large rock specimens with detailed interpretation panels. 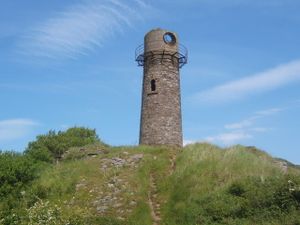 The older of two lighthouses at Hodbarrow

There are two nature reserves near the town, both of which are located on the Duddon Estuary; an internationally important area for wildlife and designated a 'Site of Special Scientific Interest' or SSSI. The Hodbarrow Nature Reserve is owned by the RSPB and is located to the south of the town, which in October 2005, saw the unveiling of its new public aid, with logos produced by local artists Stuart Edwards and Holly Parminter. The Millom Iron Works Local Nature Reserve is located to the east of the town. Both reserves are important for Tern species and a number of wading birds and waterfowl. Hodbarrow is renowned for large numbers of wildfowl during the winter. Various birds of prey can be seen hunting on both reserves throughout the year.

In 1866 the Hodbarrow Mining Company built a lighthouse on Hodbarrow Point to guide ships to its dock. When the company built a sea wall in 1905 to protect its mineworkings, it established a new lighthouse on the wall and abandoned the old one. Both structures still stand; indeed the newer lighthouse (which had itself been abandoned in 1949) was in 2004 refurbished and relit as part of a local community initiative.[17] 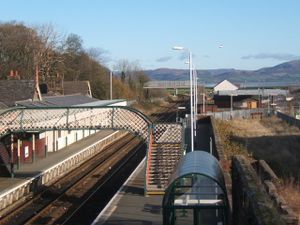 Millom is served by Millom railway station on the Cumbrian Coast Line. The A5093 road goes through the town and is itself a loop off of the A595. The town council supports the building of a road bridge across the Duddon estuary between Millom and the Furness peninsula.

Millom School is a secondary school and sixth form, for pupils from 11–19 years old. It houses the adult education centre, swimming pool, an all weather sports pitch and the "Melvyn Bragg Drama Studio" which was opened in 2005.[18] There are a number of other schools in the town including Millom Infants School, The Nursery, St James' Catholic Primary School and Black Combe Junior School built in the early 1970s; its first headmaster, Frank Eccles, died 01/01/2013 aged 89.[19]

Primary health care is provided at the town's 'community' hospital. It also provides some clinics - physiotherapy, podiatry and has a small x-ray facility. The inpatients occupy one ward spanning a 6 (now 5) bed bay, a 4-bed bay, twin and single rooms. The hospital does not offer A+E service nor any other 'drop-in' healthcare services. The nearest A+E (Accident and Emergency) service is at Furness General Hospital ~ 20 miles away by road at Barrow-in-Furness. 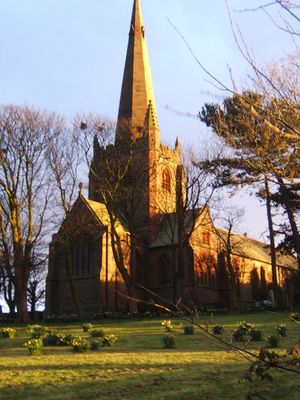 Millom's original parish church is Holy Trinity, a grade I listed building dating to the 12th century.[20] In 1877 the growth of the town required the building of another church and architects Paley and Austin were commissioned to build St George's, a grade II listed building.[21] There are also Roman Catholic, Baptist and Methodist churches and a community church. The Jehovah's Witnesses also have a Kingdom Hall in the town. Places of worship map

Millom Recreation Centre comprises a large sports hall and a small multi-gym and caters for a wide range of different sports. Millom has a Crown green bowling club, tennis and cricket are also played in the town.

Millom Rugby League Club is the oldest existing amateur rugby league club in the world having been founded in 1873. Millom also has a Rugby union team, who train and play at Haverigg. They currently play in the Cumbrian League.