From Infogalactic: the planetary knowledge core
Jump to: navigation, search
Not to be confused with Millville, Pennsylvania.

Millvale is a borough in Allegheny County, Pennsylvania, along the Allegheny River, opposite Pittsburgh. In the past, it had iron manufactures, saw works, stone works, lumber mills, breweries, etc. The population was 3,744 at the 2010 census.[1] 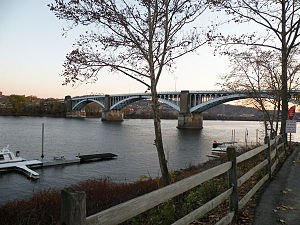 The southern Half of Millvale was formerly part of Allegheny city limits Prior to its annexation by Pittsburgh in 1907. Until 1952 the borough was served by the "3 Millvale" trolley operated by Pittsburgh Railways.[2]

Millvale is located at the confluence of Girtys Run and the Allegheny River. Much of the borough is on a floodplain and has been subjected to extensive flooding at many times during its history.

St. Nicholas Croatian Catholic Church, on Maryland Avenue in Millvale, is the first Croatian Catholic parish in America.[12] Painted on the walls of the church are the world-renowned murals of Croatian artist Maksimilijan Vanka. These murals, painted in the 1930s and 1940s, were Vanka's gift to the United States. They represent the struggles of the Croatian people in the face of war and poverty in their homeland and as immigrants in post-industrial America. This story is told through imagery that blends the Slavic experience with their strong Roman Catholic faith, a faith which strengthened them in the face of adversity.

Millvale Riverfront Park provides a 1.7 mile bike and walking trail that provides access from Millvale to Pittsburgh's North Shore, PNC Park, and Heinz Stadium along the Three Rivers Heritage Trail. The trail meanders along the Allegheny River, past Herr's Island, the TRRA Millvale Boathouse and into the Millvale Riverfront park. Plans for a bike/pedestrian bridge from the Millvale riverfront to Herr's island has received partial funding from DCNR and plans to connect the Millvale Trail to points north are being discussed. Access to the Millvale business district is less than half a mile away and restrooms are available. Other park amenities include a beautiful pavilion with riverfront access and a full kitchen, Mr.Smalls Skate Park, bike and boat rental, Millvale Marina, kayak and rowing boat launch access, fishing, tackle and bait shop, and more. The Riverfront Park is also home to the wildly popular annual BrewFest in August and the newly launched, well-crafted Harvest Moon Wine Festival in the Fall.

Most recently, the Millvale Community Library has been launched as an all-volunteer effort of community members to take several vacant buildings and lots and turn them into a multi-use space centered around creating Millvale's first public library and associated garden space. This project was launched by community volunteers and Pittsburgh-based non-profit organization, New Sun Rising, in 2007 and has enlisted hundreds of volunteers to help turn this community dream into a reality.