The Millwall Iron Works, London, England, was a 19th-century industrial complex and series of companies, which developed from 1824. Formed from a series of small shipbuilding companies to address the need to build larger and larger ships, the holding company collapsed after the Panic of 1866 which greatly reduced shipbuilding in London. Subsequently a recovery was made by a series of smaller companies, but by the later 19th century the location was too small for the building of ships on the scale then required. Most of its buildings, being near the apex of the peninsula, survived the Blitz and have been made into apartment blocks in a residential estate, Burrells Wharf.

By the early 8th century, the Land of Promise estate was in Marshwall (now Millwall) on the north side of the River Thames east of London, was owned by St Martin's-in-the-Fields haberdasher Simon Lemon. Mastmaker Robert Todd then bought the estate, leaving it to his partner Thomas Todd and his wife's cousin Elizabeth, wife of mastmaker Charles Ferguson of Poplar.[1] In 1824, industrialisation reached the area with thee development of the chemical-processing works of the Imperial Gas Light & Coke Company.[1]

In 1835 Scottish engineers Sir William Fairbairn and David Napier bought the Land of Promise estate from Charles Augustus Ferguson, the start of making Millwall an important centre of iron shipbuilding.[1]

In 1836, Fairbairn laid out an ironworks on a three-acre site to develop small ships, although his main works remained in Manchester. More than 100 ships, mostly under 2,000 tons, were built by Fairbairn at Millwall, including vessels for the Admiralty, the merchant marine, the Tsar of Russia and the King of Denmark.

But the works were not a financial success, resulting in its sale in 1848 to John Scott Russell and partners.[1] John Scott Russell built complete ships in the works, fully fitted out, which they then floated out on to the river as ready to go ships. One of their earliest commissions was the iron steamer Taman, completed in 1848 for the Imperial Russian government to operate from the Black Sea ports.[1] 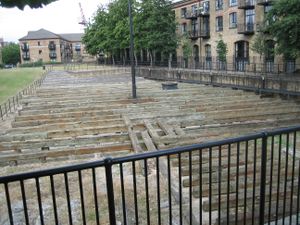 Some of the concrete and timber sub-structure of the Great Eastern's launch ramp
Main article: SS Great Eastern

On January 31, 1858, the largest ship of that time, the SS Great Eastern designed by Isambard Kingdom Brunel, was launched from 'Napier Yard' the shipyard leased by Messrs J Scott Russell & Co. The 211 metre (692 ft) length was too wide for the river, and the ship had to be launched sideways.[2] This increased the cost of the project, with cost over runs resulting in the bankruptcy of John Scott Russell.[1]

Due to the technical difficulties of the launch, this was the last ship of such a size to be built on the Island, though other builders such as Yarrows and Samuda Brothers continued building warships on the island for another 50 years. A section of the concrete and timber sub-structure from the launch site, is preserved on site for public display at the modern Napier Avenue.

The new company redeveloped the combined 27 acres (0.11 km2) of works and shipyards, which had a river frontage of 1,900 feet (580 m).[3] Famous for its iron cladding of the Royal Navy's ships under contract to the British Admiralty, at this point the Millwall Iron Works employed between 4,000 and 5,000 men. Conditions were good for an industrial complex of the time, with half-day Saturday working, a canteen, sports clubs and works band. Together with the Thames Ironworks and Shipbuilding Company, they were considered to be of greater national importance than the Royal Dockyards, with a production capacity for iron ships and armour greater than that of the whole of France.[1]

After the Panic of 1866, creating an international financial downturn that accompanied the failure of Overend, Gurney and Company in London, and the corso forzoso abandonment of the silver standard in Italy, the company failed. Various parts of the company were bought out of receivership, including the Millwall Iron Works now managed by John Hughes.[1]

By the early 20th century, iron making had ceased in Millwall, and the works continued as builder and repair of small ships, and steel fabrication unit, industrial storage sheds came to dominate the works. The site was converted to residential use as Burrells Wharf, with the last buildings added in the first decade after 2000.[1]