Milton of Campsie is a large village situated in East Dunbartonshire, Scotland roughly 10 miles north of Glasgow. Nestling at the foot of the Campsie Fells, it is neighboured by Kirkintilloch and Lennoxtown. The village expanded greatly in the 1970s with the addition of modern housing estates by Barratt and Bellway, the latter being more extensive. 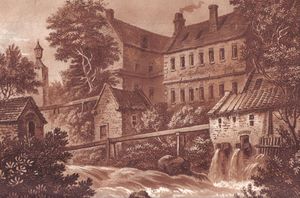 It has one full sized grass football park in what is known locally as "The Battlefield", as well as another smaller football field at Beechtree Park. Amenities include a newsagent, a Co-op Scotmid, Post Office, pharmacy, delicatessen and two hairdressing salons. The Kincaid House Hotel consists of accommodation and licensed bars and restaurants. There is another bar/restaurant called the Craigfoot Inn run by the Stirling family.

Milton of Campsie Parish Church (Church of Scotland) is situated on Antermony Road. A Roman Catholic church, St Paul's, is located nearby on Cairnview Road.[2]

Until the late nineteenth century, the Kincaid and Lennox families were influential in Milton.[citation needed]

A small plaque at the centre of the village commemorates the landing of the Italian diplomat and balloonist, Vincenzo Lunardi, on 5 December 1785.

Directly across from Scotmid and next to the church there is a small World War I and World War II memorial to commemorate the men of the village who gave their lives for Britain. At the Cross there is an open seating area called "The Old Mans Rest"; previously there was a shelter for an earlier generation.

Milton of Campsie also has a non-denominational Primary School called Craighead Primary School. The road that passes next to the Post Office is called School Lane. There is also a nursery school located next to Craighead Primary. The village lives a relatively peaceful life and has a low crime rate.[citation needed]

Milton of Campsie was served by the railway for over a hundred years from 1848 until it was closed to passenger traffic in 1951. The Campsie Branch ran from the junction of the Edinburgh & Glasgow Line at Lenzie and dropped down through Kirkintilloch, to terminate in Lennoxtown, although a 'through-road' continued on the Blane Valley Line to Strathblane, then onto the tourist route to Aberfoyle in the Trossachs.