From Infogalactic: the planetary knowledge core
Jump to: navigation, search
For other uses, see Mind the gap (disambiguation).
File:MindTheGapVictoria.jpg
"Mind the gap" tile mosaic on a platform at Victoria station in London 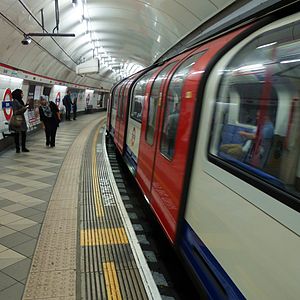 A platform at Bank station in London with a 1-foot (30 cm) gap between the train and the platform edge. 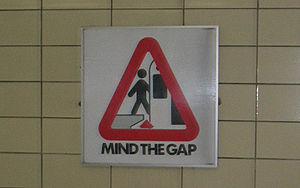 A typical "mind the gap" warning sign found on the Toronto subway and RT
File:請小心月台空隙.JPG
"Mind the gap" sign on a Hong Kong MTR train

"Mind the gap" is an audible or visual warning phrase issued to rail passengers in the UK (and elsewhere) to take caution while crossing the horizontal, and in some cases vertical, spatial gap between the train door and the station platform.

The phrase was first introduced in 1969 on the London Underground in the United Kingdom. The phrase is also associated with souvenir T-shirts that Transport for London sells, featuring the warning printed over the network's roundel logo.

The phrase "Mind the gap" was coined in around 1968 for a planned automated announcement, after it had become impractical for drivers and station attendants to warn passengers. London Underground chose digital recording using solid state equipment with no moving parts.[dubious – discuss] As data storage capacity was expensive, the phrase had to be short. A concise warning was also easier to paint onto the platform.

The equipment was supplied by AEG Telefunken. According to the Independent on Sunday, sound engineer Peter Lodge, who owned Redan Recorders in Bayswater, working with a Scottish Telefunken engineer, recorded an actor reading "Mind the gap" and "Stand clear of the doors please", but the actor insisted on royalties and the phrases had to be re-recorded. Lodge read the phrases to line up the recording equipment for level and those were used.[citation needed]

While Lodge's recording is still in use, some lines use other recordings. One was recorded by voice artist Emma Clarke. Others, on the Piccadilly line for example, are by Tim Bentinck.

At least 10 stations were supplied with announcers manufactured by PA Communications Ltd. of Milton Keynes. The recorded voice is that of Keith Wilson, their industrial sales manager at the time (May 1990). It can still be heard, at Paddington for example.

In March 2013 it was reported that an old "Mind the gap" recording by the actor Oswald Laurence would be restored to Embankment station so that the actor's widow could hear his voice.[1]

File:Mind the gap.ogg
"Mind the gap" announcements being made on the Bakerloo line platform at Paddington station in London

Because some platforms on the London Underground are curved and the rolling stock that uses them are straight, an unsafe gap is created when a train stops at a curved platform. In the absence of a device to fill the gap, some form of visual and auditory warning is needed to advise passengers of the risk of being caught unaware and sustaining injury by stepping into the gap. The phrase "Mind the gap" was chosen for this purpose and can be found painted along the edges of curved platforms as well as heard on recorded announcements played when a train arrives at many Underground stations.

The recording is also used where platforms are non-standard height. Deep-level tube trains have a floor height around 200 mm (8 inches) less than sub-surface stock trains. Where trains share platforms, for example some Piccadilly line (deep-tube) and District line (sub-surface) stations, the platform is a compromise. On London's Metropolitan line, a gap has been created between the train and the platform edge at Aldgate and Baker Street stations. This is due to the phasing out of the old 'A' stock trains and their replacement with 'S' stock trains, which have low floors to ease accessibility for disabled people.

"Mind the gap" audible warnings are most notably played on the Central line platforms at Bank, the Northern line northbound platform at Embankment, and the Bakerloo line platforms at Piccadilly Circus. There are markings on the platform edge which usually line up with the doors on the cars.

While the message is often played on some lines over the platform's public address system, it is also becoming more common as an arrival message inside the train itself: "Please mind the gap between the train and the platform."

File:Warning signal in the Metro Athens.jpg
"Mind the gap" sticker in an Athens Metro train, in both Greek and English
File:Metro North gap sign.jpg
"Watch the gap" variant used on Metro-North in New York
File:Mind the gap Chinglish sign in Shanghai.jpg
Chinglish interpretation of "Mind the gap" on a ferry dock in Shanghai

"Mind the gap" is used by transit systems worldwide, particularly when there are stations on curves, but most new systems tend to avoid these types of stations.

Despite its origin as a utilitarian safety warning, "Mind the gap" has become a stock phrase, and is used in many other contexts having little to do with subway safety.

For example, it has been used as the title of at least two music albums by Scooter and Tristan Psionic, a film, and a novel, as the name of a movie production company, a theatre company, and a board game.[5]

At least four non-fiction book titles use "Mind the Gap" as their primary title – the books are about generations, class divides, social science policy and the origins of human universals.

It is used in many video and mobile games, including Portal, Call of Duty: Modern Warfare 3, Halo, Where's My Water, Killing Floor, Amazing Alex, Armadillo Run and BioShock Infinite, and in animated series such as The Clone Wars,[6] usually in an ironic context. A soldier in Captain America: The First Avenger says it, humorously, before they descend via zip-line onto a moving train across snowy mountain peaks. It was a prominent utterance by the subterranean cannibal killer of the 1972 movie Death Line.[7] The phrase is also featured in the soundtrack of the game Timesplitters: Future Perfect in the Subway level.[8]

It is also the title of a Noisettes song on their album What's the Time Mr. Wolf?. The phrase is used in the songs "Deadwing" by Porcupine Tree, "Bingo" by Madness, "Someone in London" by Godsmack, Metal Airplanes by Matthew Good and "New Frontier" by the Counting Crows. Emma Clarke, one of the voices of the London Underground, has released a Mind The Gap single. It features spoof London Underground announcements.[9] The Portuguese hip hop group Mind Da Gap was also inspired in this stock phrase.[10]

The phrase was used as the name for a campaign in December 2010 to lobby the UK Government to allow Gap Year students to defer their university place and not pay the higher tuition fees in September 2012.[11]

The Karotz wi-fi rabbit occasionally says "Mind the gap!" at random as part of the 'mood' setting.

The phrase has been used to name a combinatorial optimization problem.[12]

The message is also the inspiration behind the name of Hans Rosling's 'Gapminder' software.

The phrase was the title of a 1999 game show hosted by Paul Ross, made for ITV by Carlton Television.