From Infogalactic: the planetary knowledge core
(Redirected from Mineralogist)
Jump to: navigation, search 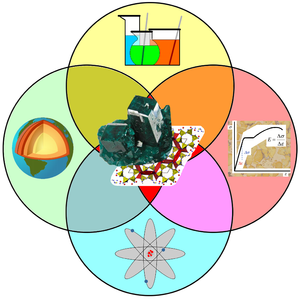 Mineralogy is a mixture of chemistry, materials science, physics and geology.

Mineralogy is a subject of geology specializing in the scientific study of chemistry, crystal structure, and physical (including optical) properties of minerals. Specific studies within mineralogy include the processes of mineral origin and formation, classification of minerals, their geographical distribution, as well as their utilization. 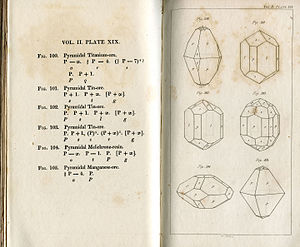 Page from Treatise on mineralogy by Friedrich Mohs (1825). 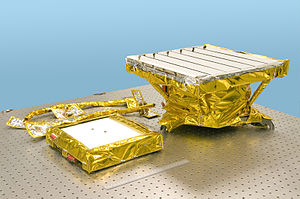 Left side of the Moon Mineralogy Mapper, a spectrometer that mapped the lunar surface.[1]
Main article: History of mineralogy

Early writing on mineralogy, especially on gemstones, comes from ancient Babylonia, the ancient Greco-Roman world, ancient and medieval China, and Sanskrit texts from ancient India and the ancient Islamic World.[2] Books on the subject included the Naturalis Historia of Pliny the Elder, which not only described many different minerals but also explained many of their properties, and Kitab al Jawahir (Book of Precious Stones) by Persian scientist Al Biruni. The German Renaissance specialist Georgius Agricola wrote works such as De re metallica (On Metals, 1556) and De Natura Fossilium (On the Nature of Rocks, 1546) which began the scientific approach to the subject. Systematic scientific studies of minerals and rocks developed in post-Renaissance Europe.[2] The modern study of mineralogy was founded on the principles of crystallography (the origins of geometric crystallography, itself, can be traced back to the mineralogy practiced in the eighteenth and nineteenth centuries) and to the microscopic study of rock sections with the invention of the microscope in the 17th century.[2]

Nicholas Steno first observed the law of constancy of interfacial angles (also known as the first law of crystallography) in quartz crystals in 1669.[3]:4 This was later generalized and established experimentally by Jean-Baptiste L. Romé de l'Islee in 1783.[4] René Just Haüy, the "father of modern crystallography", showed that crystals are periodic and established that the orientations of crystal faces can be expressed in terms of rational numbers, as later encoded in the Miller indices.[3]:4 In 1814, Jöns Jacob Berzelius introduced a classification of minerals based on their chemistry rather than their crystal structure.[5] William Nicol developed the Nicol prism, which polarizes light, in 1827–1828 while studying fossilized wood; Henry Clifton Sorby showed that thin sections of minerals could be identified by their optical properties using a polarizing microscope.[3]:4[5]:15 James D. Dana published his first edition of A System of Mineralogy in 1837, and in a later edition introduced a chemical classification that is still the standard.[3]:4[5]:15 X-ray diffraction was demonstrated by Max von Laue in 1912, and developed into a tool for analyzing the crystal structure of minerals by the father/son team of William Henry Bragg and William Lawrence Bragg.[3]:4

More recently, driven by advances in experimental technique (such as neutron diffraction) and available computational power, the latter of which has enabled extremely accurate atomic-scale simulations of the behaviour of crystals, the science has branched out to consider more general problems in the fields of inorganic chemistry and solid-state physics. It, however, retains a focus on the crystal structures commonly encountered in rock-forming minerals (such as the perovskites, clay minerals and framework silicates). In particular, the field has made great advances in the understanding of the relationship between the atomic-scale structure of minerals and their function; in nature, prominent examples would be accurate measurement and prediction of the elastic properties of minerals, which has led to new insight into seismological behaviour of rocks and depth-related discontinuities in seismograms of the Earth's mantle. To this end, in their focus on the connection between atomic-scale phenomena and macroscopic properties, the mineral sciences (as they are now commonly known) display perhaps more of an overlap with materials science than any other discipline.

An initial step in identifying a mineral is to examine its physical properties, many of which can be measured on a hand sample. These can be classified into density (often given as specific gravity); measures of mechanical cohesion (hardness, tenacity, cleavage, fracture, parting); macroscopic visual properties (luster, color, streak, luminescence, diaphaneity); magnetic and electric properties; radioactivity and solubility in hydrogen chloride (HCl).[3]:97–113[6]:39–53

If the mineral is well crystallized, it will also have a distinctive crystal habit (for example, hexagonal, columnar, botryoidal) that reflects the crystal structure or internal arrangement of atoms.[6]:40–41 It is also affected by crystal defects and twinning. Many crystals are polymorphic, having more than one possible crystal structure depending on factors such as pressure and temperature.[3]:66–68[6]:126

File:Perovskite.jpg
The perovskite crystal structure. The most abundant mineral in the Earth, bridgmanite, has this structure.[7] Its chemical formula is (Mg,Fe)SiO3; the red spheres are oxygen, the blue spheres silicon and the green spheres magnesium or iron.
Main article: Crystal structure
See also: Crystallography

The crystal structure is the arrangement of atoms in a crystal. It is represented by a lattice of points which repeats a basic pattern, called a unit cell, in three dimensions. The lattice can be characterized by its symmetries and by the dimensions of the unit cell. These dimensions are represented by three Miller indices.[8]:91–92 The lattice remains unchanged by certain symmetry operations about any given point in the lattice: reflection, rotation, inversion, and rotary inversion, a combination of rotation and reflection. Together, they make up a mathematical object called a crystallographic point group or crystal class. There are 32 possible crystal classes. In addition, there are operations that displace all the points: translation, screw axis, and glide plane. In combination with the point symmetries, they form 230 possible space groups.[8]:125–126

Most geology departments have X-ray powder diffraction equipment to analyze the crystal structures of minerals.[6]:54–55 X-rays have wavelengths that are the same order of magnitude as the distances between atoms. Diffraction, the constructive and destructive interference between waves scattered at different atoms, leads to distinctive patterns of high and low intensity that depend on the geometry of the crystal. In a sample that is ground to a powder, the X-rays sample a random distribution of all crystal orientations.[9] Powder diffraction can distinguish between minerals that may appear the same in a hand sample, for example quartz and its polymorphs tridymite and cristobalite.[6]:54

A few minerals are chemical elements, including sulfur, copper, silver, and gold, but the vast majority are compounds. Before about 1947, the main method for identifying composition was wet chemical analysis, which involved dissolving a mineral in an acid such as hydrochloric acid (HCl). The elements in solution were then identified using colorimetry, volumetric analysis or gravimetric analysis.[10]:224–225 A variation on the wet methods is atomic absorption spectroscopy, which also requires the dissolution of the sample but is much faster and cheaper than the above methods. The solution is vaporized and its absorption spectrum is measured in the visible and ultraviolet range.[10]:225–226 Other techniques are X-ray fluorescence, electron microprobe analysis and optical emission spectrography.[10]:227–232 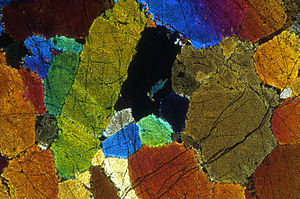 In addition to macroscopic properties such as color or lustre, minerals have properties that require a polarizing microscope to observe.

When light passes from air or a vacuum into a transparent crystal, some of it is reflected at the surface and some refracted. The latter is a bending of the light path that occurs because the speed of light changes as it goes into the crystal; Snell's law relates the bending angle to the Refractive index, the ratio of speed in a vacuum to speed in the crystal. Crystals whose point symmetry group falls in the cubic system are isotropic: the index does not depend on direction. All other crystals are anisotropic: light passing through them is broken up into two plane polarized rays that travel at different speeds and refract at different angles.[10]:289–291

A polarizing microscope is similar to an ordinary microscope, but it has two plane-polarized filters, a (polarizer) below the sample and an analyzer above it, polarized perpendicular to each other. Light passes successively through the polarizer, the sample and the analyzer. If there is no sample, the analyzer blocks all the light from the polarizer. However, an anisotropic sample will generally change the polarization so some of the light can pass through. Thin sections and powders can be used as samples.[10]:293–294

When an isotropic crystal is viewed, it appears dark because it does not change the polarization of the light. However, when it is immersed in a calibrated liquid with a lower index of refraction and the microscope is thrown out of focus, a bright line called a Becke line appears around the perimeter of the crystal. By observing the presence or absence of such lines in liquids with different indices, the index of the crystal can be estimated, usually to within ± 0.003.[10]:294–295 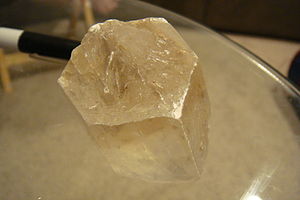 Hanksite, Na22K(SO4)9(CO3)2Cl, one of the few minerals that is considered a carbonate and a sulfate
See also: Mineral § Mineral classes

Systematic mineralogy is the identification and classification of minerals by their properties. Historically, mineralogy was heavily concerned with taxonomy of the rock-forming minerals. In 1959, the International Mineralogical Association formed the Commission of New Minerals and Mineral Names to rationalize the nomenclature and regulate the introduction of new names. In July 2006, it was merged with the Commission on Classification of Minerals to form the Commission on New Minerals, Nomenclature, and Classification.[11] There are over 6,000 named and unnamed minerals, and about 100 are discovered each year.[12] The Manual of Mineralogy places minerals in the following classes: native elements, sulfides, sulfosalts, oxides and hydroxides, halides, carbonates, nitrates and borates, sulfates, chromates, molybdates and tungstates, phosphates, arsenates and vanadates, and silicates.[10]

The environments of mineral formation and growth are highly varied, ranging from slow crystallization at the high temperatures and pressures of igneous melts deep within the Earth's crust to the low temperature precipitation from a saline brine at the Earth's surface.

Various possible methods of formation include:[13]

Biomineralogy is a cross-over field between mineralogy, paleontology and biology. It is the study of how plants and animals stabilize minerals under biological control, and the sequencing of mineral replacement of those minerals after deposition.[14] It uses techniques from chemical mineralogy, especially isotopic studies, to determine such things as growth forms in living plants and animals[15][16] as well as things like the original mineral content of fossils.[17] 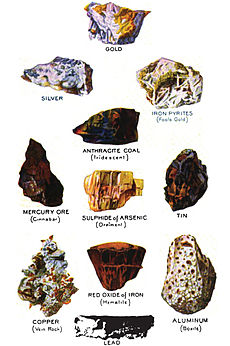 A color chart of some raw forms of commercially valuable metals.[18]

Minerals are essential to various needs within human society, such as minerals used as ores for essential components of metal products used in various commodities and machinery, essential components to building materials such as limestone, marble, granite, gravel, glass, plaster, cement, etc.[13] Minerals are also used in fertilizers to enrich the growth of agricultural crops.