From Infogalactic: the planetary knowledge core
Jump to: navigation, search
This article is about the Roman goddess. For other uses, see Minerva (disambiguation).

Minerva (/mɪˈnɜːr.və/; Latin: [mɪˈnɛr.wa]; Etruscan: Menrva) was the Roman goddess of wisdom and sponsor of arts, trade, and strategy. She was born with weapons from the head of Jupiter.[1] After impregnating the titaness Metis, Jupiter recalled a prophecy that his own child would overthrow him. Fearing that their child would grow stronger than him and rule the Heavens in his place, Jupiter swallowed Metis whole. The titaness forged weapons and armor for her child while within the father-god, and the constant pounding and ringing gave him a headache. To relieve the pain, Vulcan used a hammer to split Jupiter's head and, from the cleft, Minerva emerged, whole, adult, and bearing her mother's weapons and armor. From the 2nd century BC onwards, the Romans equated her with the Greek goddess Athena.[2] She was the virgin goddess of music, poetry, medicine, wisdom, commerce, weaving, crafts, and magic.[3] She is often depicted with her sacred creature, an owl usually named as the "owl of Minerva",[4] which symbolised her association with wisdom and knowledge.

Stemming from an Italic moon goddess *Meneswā ('She who measures'), the Etruscans adopted the inherited Old Latin name, *Menerwā, thereby calling her Menrva. It is assumed that her Roman name, Minerva, is based on this Etruscan mythology. Minerva was the goddess of wisdom, war, art, schools and commerce. She was the Etruscan counterpart to Greek Athena. Like Athena, Minerva was born from the head of her father, Jupiter (Greek Zeus).

By a process of folk etymology, the Romans could have linked her foreign name to the root men- in Latin words such as mens meaning "mind", perhaps because one of her aspects as goddess pertained to the intellectual. The word mens is built from the Proto-Indo-European root *men- 'mind' (linked with memory as in Greek Mnemosyne/μνημοσύνη and mnestis/μνῆστις: memory, remembrance, recollection, manush in Sanskrit meaning mind). 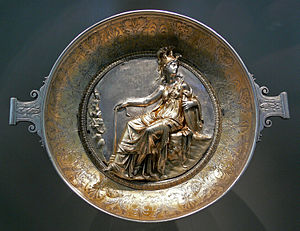 Raised-relief image of Minerva on a Roman gilt silver bowl, 1st century BC 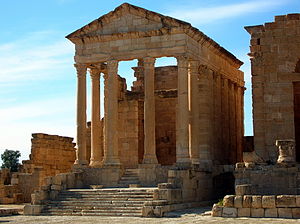 Temple of Minerva in Sbeitla, Tunisia

The Etruscan Menrva was part of a holy triad with Tinia and Uni, equivalent to the Roman Capitoline Triad of Jupiter-Juno-Minerva. Minerva was the daughter of Jupiter.

As Minerva Medica, she was the goddess of medicine and doctors. As Minerva Achaea, she was worshipped at Lucera in Apulia where votive gifts and arms said to be those of Diomedes were preserved in her temple.[5][6] 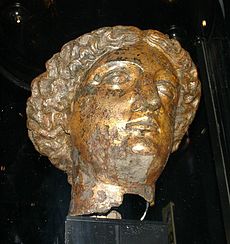 In Fasti III, Ovid called her the "goddess of a thousand works". Minerva was worshiped throughout Italy, and when she eventually became equated with the Greek goddess Athena, she also became a goddess of war, although in Rome her warlike nature was less emphasized.[7] Her worship was also spread throughout the empire—in Britain, for example, she was syncretized with the local goddess Sulis, who was often invoked for restitution for theft.[8]

The Romans celebrated her festival from March 19 to March 23 during the day which is called, in the neuter plural, Quinquatria, the fifth after the Ides of March, the nineteenth, an artisans' holiday . A lesser version, the Minusculae Quinquatria, was held on the Ides of June, June 13, by the flute-players, who were particularly useful to religion. In 207 BC, a guild of poets and actors was formed to meet and make votive offerings at the temple of Minerva on the Aventine Hill. Among others, its members included Livius Andronicus. The Aventine sanctuary of Minerva continued to be an important center of the arts for much of the middle Roman Republic.

Minerva was worshipped on the Capitoline Hill as one of the Capitoline Triad, at the Temple of Minerva Medica, and at the "Delubrum Minervae", a temple founded around 50 BC by Pompey on the site now occupied by the church of Santa Maria sopra Minerva. When it was founded, the emperor himself was present and was believed to be of divine nature as a result of its construction.

Main article: Minerva in the emblems of educational establishments

As a patron goddess of wisdom, Minerva frequently features in statuary, as an image on seals, and in other forms at educational institutions.

Use by societies and governments