The Megrelians[4] (Megrelian: მარგალი, margali; Georgian: მეგრელები: megrelebi) are a subethnic group of Georgians[5][6][7][not in citation given][8][9][10][11][12] that mostly live in Samegrelo region of Georgia. They also live in considerable numbers in Abkhazia and Tbilisi. In the pre-1930 Soviet census, the Megrelians were afforded their own ethnic group (natsional'nost) category.[13][14]

Mingrelian lady (right) negotiating with the invading Turks, 1856. An episode of the Crimean War. 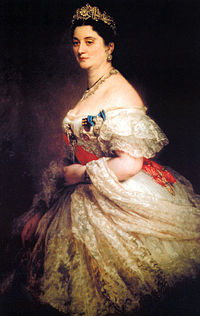 Ekaterine Dadiani (1816–1882), the last ruling princess of the Mingrelians.

The endonym Margali (მარგალი) is presumably reflected in the Greek Manraloi (Μάνραλοι), recorded as a people of Colchis by Ptolemy in the 2nd century BC.

Early in the Middle Ages, Megrelian aristocracy and clergy, later followed by laymen, adopted the Georgian tongue as a language of literacy and culture.[citation needed] After the fragmentation of the Kingdom of Georgia in the 15th century, Mingrelia was an autonomous principality until being annexed by the Russian Empire in the 19th century.

In several censuses under the Russian Empire and the early Soviet Union, Megrelians were considered a separate group, largely because at the time of the annexation Samegrelo was politically separate from eastern Georgia, the historical political and cultural centers of the Medieval Georgian Kingdoms. They were, reclassified under the broader category of Georgian in the 1930s. Currently, most Megrelians identify themselves as a subgroup of the Georgian nation and have preserved many characteristic cultural features - including the Megrelian language - that date back to the pre-Christian Colchian era.

The first President of an independent Georgia, Zviad Gamsakhurdia (1939–1993), was a Megrelian.[18] Therefore, after the violent coup d'état of December 21, 1991 - January 6, 1992, Samegrelo became the centre of a civil war, which ended with the defeat of Gamsakhurdia's supporters.

Approximately 180,000-200,000 people of Georgian and Megrelian provenance have been expelled from Abkhazia as a result of the Georgian-Abkhaz conflict in the early 1990s and the ensuing ethnic cleansing of Georgians in this separatist region.