Minister of the Economy, Finances and Industry (France)

From Infogalactic: the planetary knowledge core
(Redirected from Minister of the Economy, Finance and Industry (France))
Jump to: navigation, search 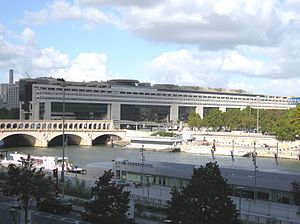 the seat of the Minister of Finance at Bercy in Paris

The Minister of the Economy, Finances and Industry (French: Ministre de l'Économie, des Finances et de l'Industrie [ministɛʁ dᵊ lekɔnɔmi defiˈnɑ̃s e dᵊlɛ̃dysˈtʁi]), called the Minister of Finance for short, is one of the most prominent positions in the cabinet of France after the Prime Minister.

The exact title of the minister has changed over time, and has included the terms "economy", "industry", "finances", or "employment" though history. In the period from 2007 to 2011 the Finance Minister had a colleague of equal rank with the title Minister of Budget, Public Accounts, Public Services and Reform of the State (the last title added in 2009).

As of August 2014, the ministry is split between Minister of Finance and Public Accounts Michel Sapin and Minister of Economy, Industry and Digital data Emmanuel Macron.

The Minister of Finance oversees:

By her authority above the financial assets of the State, the financial and economic national system and the taxation rules, the Minister is allowed to represent France in the European Union council of the minister of the Economy and Finance (ECOFIN).

The Junior Minister for the Budget at the Ministry of the Economy, Finance, and External Trade

The Minister for the Budget, Public Accounts, the Civil Service and State Reform supervises:

The French taxation system is supervised by three separate board:

The taxation information system are being modernised by the so-called Copernic tax project.

He is responsible with their colleagues for Health, Youth and Sport and for Labour, Labour Relations and Solidarity of the equilibrium of social accounts.

The Ministry of Finance is situated in Bercy, in the 12th arrondissement of Paris. The building extends to the Seine River, where there is an embarcadero with fast river boats for faster liaisons to other government agencies.

That is why the French media often refer to it as simply "Bercy". The sentence the Bercy Fortress (la forteresse de Bercy) refers to the Ministry as a dark department with obtuse civil servants, especially of high rank. That is emphasized by the impressive look of the building.

For evident practical reasons, the two ministers share the building and some common services that were under the former ministry of Economy, Finances and Industry.