The Russian Minister of Defence is the nominal head of all the Armed Forces, serving under the president of the Russian Federation, who is the Supreme Commander-in-Chief of the Armed Forces of the Russian Federation. In this capacity, the minister exercises day-to-day administrative and operational authority over the armed forces. The General Staff, the executive body of the Ministry of Defence, implements the defence minister's operational instructions and orders. The State Duma exercises legislative authority over the Ministry of Defence through the Government of Russia, which is nominally responsible for maintaining the armed forces at the appropriate level of readiness.

The main ministry building, built in the 1980s, is located on Arbatskaya Square, near Arbat Street. Other buildings of the ministry are located throughout the city of Moscow. The high supreme body that responsible for the Ministry's management and supervision of the Armed Forces is The National Defense Management Center (Национальный центр управления обороной РФ) which located in Frunze Naberezhnaya and responsible for centralization of the Armed Forces' command.

The current Russian minister of Defence is Sergey Shoygu. 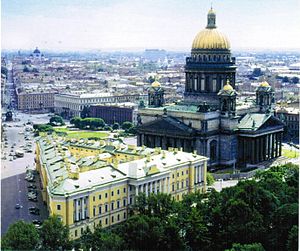 The authors of the U.S. Library of Congress Country Studies' volume for Russia said in July 1996 that:

The structure of the Russian Defense Ministry does not imply military subordination to civilian authority in the Western sense.[2] The historical tradition of military command is considerably different in Russia. The tsars were educated as officers, and they regularly wore military uniforms and held military rank. Josef Stalin in his later years in power frequently wore a military uniform, and he assumed the title Generalissimo of the Soviet Union. Likewise, Soviet leader Leonid Brezhnev was named Marshal of the Soviet Union. By tradition dating back to the tsars, the Minister of Defense was a uniformed officer,' with military background (Dmitry Milyutin, Rodion Malinovsky) or without (Dmitriy Ustinov). The State Duma also seats a large number of deputies who are active-duty military officers—another tradition that began in the Russian imperial era. These combinations of military and civilian authority ensure that military concerns are considered at the highest levels of the Russian government.

In May 1992, President of Russia Boris Yeltsin appointed General of the Army Pavel Grachev to the post of Minister of Defence. Grachev's decision to side with Yeltsin in the Russian constitutional crisis of 1993, when the president called up tanks to shell the Russian White House to blast his opponents out of parliament, effectively deprived the Supreme Soviet of Russia of its nominal an opportunity to overturn the president's authority. At least partly for that reason, Yeltsin retained his defence minister despite intense criticism of Grachev's management of the First Chechen War and the Russian military establishment in general. Finally, Yeltsin's victory in the first round of the 1996 Russian presidential election spurred Yeltsin to dismiss Grachev.

In March 2001, Sergei Ivanov, previously secretary of the Security Council of the Russian Federation was appointed defence minister by President Vladimir Putin, becoming Russia's first non-uniformed civilian defence minister.[3] Putin called the personnel changes in Russia's security structures coinciding with Ivanov's appointment as defence minister "a step toward demilitarizing public life." Putin also stressed Ivanov's responsibility for overseeing military reform as defence minister. What Putin did not emphasise was Ivanov's long service within the KGB and FSB and his then rank of General-Lieutenant within the FSB. Such military and security agency associated men are known as siloviki.

As of 2002 there were four living Marshals of the Soviet Union. Such men are automatically Advisors to the Defence Minister. The Marshals alive at that time were Viktor Kulikov, Vasily Petrov, Sergei Sokolov, a former Minister of Defence of the Soviet Union, and Dmitri Yazov. Yazov was listed by the American analysts Scott and Scott in 2002 as a consultant to the (former 10th) Directorate for International Military Cooperation[4]

The Ministry of Defence is managed by a collegium chaired by the Defence Minister and including the deputy Defence Ministers, heads of Main Defence Ministry and General Staff Directorates, and the commanders of the Joint Strategic Commands/Military Districts, the three Services, and three branches, who together form the principal staff and advisory board of the Minister of Defence.

Military Thought is the military-theoretical journal of the Ministry of Defence, and Krasnaya Zvezda its daily newspaper.

Entities directly subordinated to the Minister of Defence in August 2012 included:[6]

An outline structure of the Ministry of Defence includes the groupings below, but this structure was in transition when it was recorded in 2004, with several deputy minister posts being abolished:[7]

Marshal of Aviation Yevgeny Shaposhnikov was the last Minister of Defence of the Soviet Union. General Colonel Konstantin Kobets supported then President of the Russian Soviet Federative Socialist Republic Boris Yeltsin during the August coup of 1991. From 19 August until 9 September 1991, Konstantin Kobets was Defense Minister of the RSFSR, though there was no ministry.[9] This post was then abolished.

The first Minister of Defence of the Russian Federation was Boris Yeltsin, who appointed himself to the position by a decree of mid March 1992.[10]