The Ministry of Defence (MoD) is the British government department responsible for implementing the defence policy set by Her Majesty's Government, and is the headquarters of the British Armed Forces.

The MoD states that its principal objectives are to defend the United Kingdom of Great Britain and Northern Ireland and its interests and to strengthen international peace and stability.[4] With the collapse of the Soviet Union and the end of the Cold War, the MoD does not foresee any short-term conventional military threat; rather, it has identified weapons of mass destruction, international terrorism, and failed and failing states as the overriding threats to Britain's interests.[5] The MoD also manages day-to-day running of the armed forces, contingency planning and defence procurement.

During the 1920s and 1930s, British civil servants and politicians, looking back at the performance of the state during World War I, concluded that there was a need for greater co-ordination between the three Services that made up the armed forces of the United Kingdom—the British Army, the Royal Navy, and the Royal Air Force. The formation of a united ministry of defence was rejected by David Lloyd George's coalition government in 1921; but the Chiefs of Staff Committee was formed in 1923, for the purposes of inter-Service co-ordination. As rearmament became a concern during the 1930s, Stanley Baldwin created the position of Minister for Coordination of Defence. Lord Chatfield held the post until the fall of Neville Chamberlain's government in 1940; his success was limited by his lack of control over the existing Service departments and his limited political influence.

Winston Churchill, on forming his government in 1940, created the office of Minister of Defence to exercise ministerial control over the Chiefs of Staff Committee and to co-ordinate defence matters. The post was held by the Prime Minister of the day until Clement Attlee's government introduced the Ministry of Defence Act of 1946. The new ministry was headed by a Minister of Defence who possessed a seat in the Cabinet. The three existing service Ministers—the Secretary of State for War, the First Lord of the Admiralty, and the Secretary of State for Air—remained in direct operational control of their respective services, but ceased to attend Cabinet.

The Ministers in the Ministry of Defence are as follows:[7] 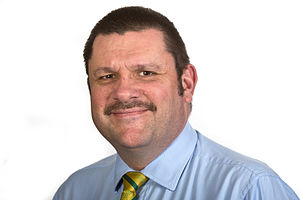 Permanent Secretaries and other senior officials

The Ministers and Chiefs of the Defence Staff are supported by a number of civilian, scientific and professional military advisors.[8] The Permanent Under-Secretary of State for Defence (generally known as the Permanent Secretary) is the senior civil servant at the MoD. His or her role is to ensure the MoD operates effectively as a department of the government.

Chiefs of the Defence Staff

The 1998 Strategic Defence Review and the 2003 Delivering Security in a Changing World White Paper outlined the following posture for the British Armed Forces:

The MoD has since been regarded as a leader in elaborating the post-Cold War organising concept of "defence diplomacy".[15][16][17] As a result of the Strategic Defence and Security Review 2010, Prime Minister David Cameron signed a 50-year treaty with French President Nicolas Sarkozy that would have the two countries co-operate intensively in military matters.[18] The UK is establishing air and naval bases in the Persian Gulf, located in the UAE and Bahrain.[19][20][21] A presence in Oman is also being considered.[22]

The Strategic Defence and Security Review 2015 included £178 billion investment in new equipment and capabilities.[23][24] The review set a defence policy with four primary missions for the Armed Forces:[25]

The review stated the Armed Forces will also contribute to the government’s response to crises by being prepared to:[25]

Following the end of the Cold War, the threat of direct conventional military confrontation with other states has been replaced by terrorism. Sir Richard Dannatt predicted British forces to be involved in combating "predatory non-state actors" for the foreseeable future, in what he called an "era of persistent conflict".[26] He told the Chatham House think tank that the fight against al-Qaeda and other militant Islamist groups was "probably the fight of our generation".[26]

Dannatt criticised a remnant "Cold War mentality", with military expenditures based on retaining a capability against a direct conventional strategic threat;[26][27] He said currently only 10% of the MoD's equipment programme budget between 2003 and 2018 was to be invested in the "land environment"—at a time when Britain was engaged in land-based wars in Afghanistan and Iraq.[26]

The Defence Committee—Third Report "Defence Equipment 2009"[28] cites an article from the Financial Times website[29] stating that the Chief of Defence Materiel, General Sir Kevin O’Donoghue, had instructed staff within Defence Equipment and Support (DE&S) through an internal memorandum to reprioritize the approvals process to focus on supporting current operations over the next three years; deterrence related programmes; those that reflect defence obligations both contractual or international; and those where production contracts are already signed. The report also cites concerns over potential cuts in the defence science and technology research budget; implications of inappropriate estimation of Defence Inflation within budgetary processes; underfunding in the Equipment Programme; and a general concern over striking the appropriate balance over a short-term focus (Current Operations) and long-term consequences of failure to invest in the delivery of future UK defence capabilities on future combatants and campaigns.[28] The then Secretary of State for Defence, Bob Ainsworth MP, reinforced this reprioritisation of focus on current operations and had not ruled out "major shifts" in defence spending.[30] In the same article the First Sea Lord and Chief of the Naval Staff, Admiral Sir Mark Stanhope, Royal Navy, acknowledged that there was not enough money within the defence budget and it is preparing itself for tough decisions and the potential for cutbacks.[30] According to figures published by the London Evening Standard[31] the defence budget for 2009 is "more than 10% overspent" (figures cannot be verified) and the paper states that this had caused Gordon Brown to say that the defence spending must be cut. The MoD has been investing in IT[32] to cut costs and improve services for its personnel.[33][34] 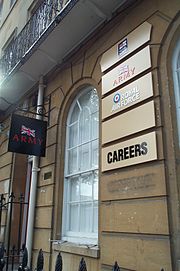 The Ministry of Defence is one of the United Kingdom's largest landowners, owning 227,300 hectares of land and foreshore (either freehold or leasehold) at April 2014, which was valued at "about £20 billion". The MoD also has "rights of access" to a further 222,000 hectares. In total, this is about 1.8% of the UK land mass. The total annual cost to support the defence estate is "in excess of £3.3 billion".[38]

The headquarters of the MoD are in Whitehall and are now known as Main Building. This structure is neoclassical in style and was originally built between 1938 and 1959 to designs by Vincent Harris to house the Air Ministry and the Board of Trade. The northern entrance in Horse Guards Avenue is flanked by two monumental statues, Earth and Water, by Charles Wheeler. Opposite stands the Gurkha Monument, sculpted by Philip Jackson and unveiled in 1997 by Queen Elizabeth II. Within it is the Victoria Cross and George Cross Memorial, and nearby are memorials to the Fleet Air Arm and RAF (to its east, facing the riverside). A major refurbishment of the building was completed under a PFI contract by Skanska in 2004.[39]

Henry VIII's wine cellar at the Palace of Whitehall, built in 1514–1516 for Cardinal Wolsey, is in the basement of Main Building, and is used for entertainment. The entire vaulted brick structure of the cellar was encased in steel and concrete and relocated nine feet to the west and nearly 19 feet (5.8 m) deeper in 1949, when construction was resumed at the site after World War II. This was carried out without any significant damage to the structure.[40]

The most notable fraud conviction was that of Gordon Foxley, head of defence procurement at the Ministry of Defence from 1981 to 1984. Police claimed he received at least £3.5m[41] in total in corrupt payments, such as substantial bribes from overseas arms contractors aiming to influence the allocation of contracts.

A government report covered by the Guardian in 2002 indicates that between 1940 and 1979, the Ministry of Defence "turned large parts of the country into a giant laboratory to conduct a series of secret germ warfare tests on the public" and many of these tests "involved releasing potentially dangerous chemicals and micro-organisms over vast swaths of the population without the public being told."[42] The Ministry of Defence claims that these trials were to simulate germ warfare and that the tests were harmless. Still, families who have been in the area of many of the tests are experiencing children with birth defects and physical and mental handicaps and many are asking for a public inquiry. According to the report these tests affected estimated millions of people including one period between 1961 and 1968 where "more than a million people along the south coast of England, from Torquay to the New Forest, were exposed to bacteria including e.coli and bacillus globigii, which mimics anthrax." Two scientists commissioned by the Ministry of Defence stated that these trials posed no risk to the public. This was confirmed by Sue Ellison, a representative of Porton Down who said that the results from these trials "will save lives, should the country or our forces face an attack by chemical and biological weapons." Asked whether such tests are still being carried out, she said: "It is not our policy to discuss ongoing research." It is unknown whether or not the harmlessness of the trials was known at the time of their occurrence.

The MoD has been criticised for an ongoing fiasco, having spent £240m on eight Chinook HC3 helicopters which only started to enter service in 2010, years after they were ordered in 1995 and delivered in 2001.[44] A National Audit Office report reveals that the helicopters have been stored in air conditioned hangars in Britain since their 2001[why?] delivery, while troops in Afghanistan have been forced to rely on helicopters which are flying with safety faults.[45] By the time the Chinooks are airworthy, the total cost of the project could be as much as £500m.[44]

In April 2008, a £90m contract was signed with Boeing for a "quick fix" solution, so they can fly by 2010: QinetiQ will downgrade the Chinooks—stripping out some of their more advanced equipment.[43]

In October 2009, the MoD was heavily criticized for withdrawing the bi-annual non-operational training £20m budget for the volunteer Territorial Army (TA), ending all non-operational training for 6 months until April 2010. The government eventually backed down and restored the funding. The TA provides a small percentage of the UK's operational troops. Its members train on weekly evenings and monthly weekends, as well as two-week exercises generally annually and occasionally bi-annually for troops doing other courses. The cuts would have meant a significant loss of personnel and would have had adverse effects on recruitment.[46]