The Ministry of Internal Affairs of Romania (Romanian: Ministerul Afacerilor Interne) is one of the fifteen ministries of the Government of Romania.

Until 2006, the ministry was housed near Lipscani in Palatul Vama Poştei, built between 1914 and 1926 according to the architect Statie Ciortan's plans. In 2006 the ministry moved into the former building of the Senate on Revolution Square. 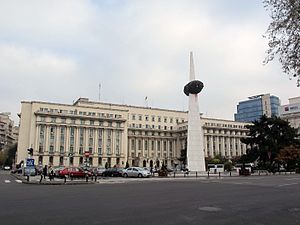 This is a list of Interior ministers from the creation of the Romanian state (1862) to the present day.

Romania used the Julian calendar until 1919, but all dates are given in the Gregorian calendar.

The following party abbreviations are used:

Additionally, the political stance of prime ministers prior to the development of a modern party system is given by C (Conservative), MC (Moderate Conservative), RL (Radical Liberal) and ML (Moderate Liberal). Interim officeholders are denoted by italics. For those who held office multiple times, their rank of service is given by a Roman numeral.