The Ministry of the Interior of the Russian Federation (MOI, Russian: Министерство внутренних дел, МВД, Ministerstvo Vnutrennikh Del, MVD) is the interior ministry of Russia. Its predecessor was founded in 1802 by Alexander I in Imperial Russia. The Ministry is headquartered in Moscow.

The current Minister of Internal Affairs is Colonel General of Police Vladimir Kolokoltsev, who was the Moscow Police Commissioner between 2009 and 2012.

Created by Alexander I on 28 March 1802 in the process of government reforms to replace the aging collegia of Peter the Great, the MVD was one of the most powerful governmental bodies of the Empire, responsible for the police forces and Internal Guards and the supervision of gubernial administrations. Its initial responsibilities also included penitentiaries, firefighting, state enterprises, the state postal system, state property, construction, roads, medicine, clergy, natural resources, and nobility; most of them were transferred to other ministries and government bodies by the mid-19th century.

As the central government began to further partition the countryside, the ispravniks were distributed among the sections.[2] Serving under them in their principal localities were commissaries (stanovoi pristav). Ispravniki and stanovoi alike were armed with broad and obscurely-defined powers, which, combined with the fact that they were for the most part illiterate and wholly ignorant of the law, formed crushing forces of oppression. Towards the end of the reign of Alexander II, the government, in order to preserve order in the country districts, also created a special class of mounted rural policemen (uryadniks, from uriad, order), who, in a time without habeas corpus, were armed with power to arrest all suspects on the spot. These uryadniks rapidly became the terror of the countryside. Finally, in the towns of the rural countryside, every house was provided with a "guard dog" of sorts, in the form of a porter (dvornik), who was charged with the duty of reporting the presence of any suspicious characters or anything of interest to the police.

In addition to the above there was also the secret police, in direct subordination to the ministry of the interior, of which the principal function is the discovery, prevention and extirpation of political sedition. Its most famous development was the so-called Third Section (of the imperial chancery) instituted by the emperor Nicholas I in 1826. This was entirely independent of the ordinary police, but was associated with the previously existing Special Corps of Gendarmes, whose chief was placed at its head. Its object had originally been to keep the emperor in close touch with all the branches of the administration and to bring to his notice any abuses and irregularities, and for this purpose its chief was in constant personal intercourse with the sovereign.

Following the growth of the revolutionary movement and assassination of Tsar Alexander II, the Department of State Police inherited the secret police functions of the dismissed Third Section and transferred the most capable Gendarmes to the Okhrana. In 1896 the powers of the minister were extended at the expense of those of the under-secretary, who remained only at the head of the corps of gendarmes; but by a law of 24 September 1904 this was again reversed, and the under-secretary was again placed at the head of all the police with the title of undersecretary for the administration of the police.

By World War I, the Department had spawned a counter-intelligence section. After the February Revolution of 1917, the Gendarmes and the Okhrana were disbanded as anti-revolutionary. 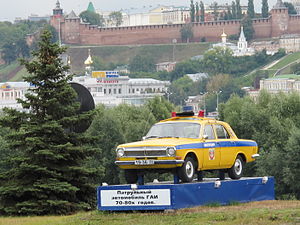 A 1970s- or 80s-vintage GAZ-24 Volga, in the period squad car livery, installed as a monument in front of the Nizhny Novgorod Main Directorate for Road Traffic Safety headquarters.

Having won the October Revolution, the Bolsheviks disbanded the tsarist police forces and formed all-proletarian Workers' and Peasants' Militsiya under NKVD of the Russian SFSR. After establishing USSR there was no Soviet (federal) NKVD until 1934.

Secret police became a part of MVD after Lavrenty Beria merged the MGB into the MVD in March 1953. Within a year Beria's downfall caused the MVD to be split up again; after that, the MVD retained its "internal security" (police) functions, while the new KGB took on "state security" (secret police) functions.

In his efforts to fight bureaucracy and maintain 'Leninist principles', Nikita Khrushchev, as the Premier of the Union, called for the dismissal of the All-Union MVD. The Ministry ceased to exist in January 1960 and its functions were transferred to the respective Republican Ministries. The MVD of the Russian SFSR was renamed the Ministry for Securing the Public Order in 1962.

Leonid Brezhnev again recreated the All-Union Ministry for Securing the Public Order in July 1966 and later assigned Nikolai Shchelokov as Minister; the RSFSR Ministry was disbanded for the second time, the first being at the creation of the NKVD of the Soviet Union. The MVD regained its original title in 1968.

Another role of the reformed MVD was to combat economic crimes, that is to suppress private business which was largely prohibited by socialist law. This fight was never successful due to the pervasive nature of the black market.

By the mid-1980s, the image of the people's militsiya was largely compromised by the corruption and disorderly behaviour of both enlisted and officer staff (the most shocking case was the robbery and murder of a KGB operative by a gang of militiamen stationed in Moscow Metro in 1983). Many high-ranking MVD officers, including the Minister himself, were revealed to be routinely bribed by illegal shadow businesses and criminals.

The Russian MVD was recreated as the MVD of the Russian SFSR in 1990, following the restoration of the republican Council of Ministers and Supreme Soviet, and remained when Russia gained independence from the Soviet Union. It currently controls the politsiya (formerly militsiya), the Main Directorate for Road Traffic Safety, and the Internal Troops. Since the disbanding of the Tax Police, it also investigates economic crimes.

The long-time additional duties of the Imperial MVD and NKVD, such as the Firefighting Service and Prisons Service, were recently moved to the Ministry of Emergency Situations and the Ministry of Justice respectively. The last reorganization abolished Main Directorates inherited from the NKVD in favour of Departments. The current minister of internal affairs in Russia is Vladimir Kolokoltsev.