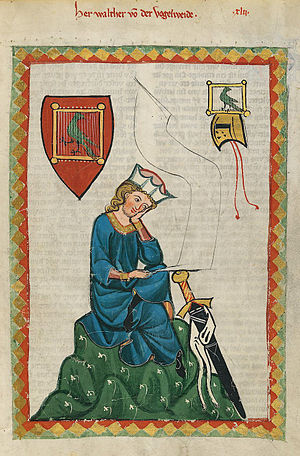 Minnesang was the tradition of lyric and song writing in Germany which flourished in the 12th century and continued into the 14th century. People who wrote and performed Minnesang are known as Minnesingers (German: Minnesänger). The name derives from the word minne, Middle High German for love which was their main subject, and an individual song was a minnelied. The Minnesänger were similar to the Provençal troubadours and northern French trouvères; they wrote love poetry in the courtly love tradition in Middle High German in the High Middle Ages.

In the absence of reliable biographical information, there has been debate about the social status of the Minnesänger. Some clearly belonged to the higher nobility – the 14th century Codex Manesse includes songs by dukes, counts, kings, and the Emperor Henry VI. Some Minnesänger, as indicated by the title Meister (master), were clearly educated commoners, such as Meister Konrad von Würzburg. It is thought that many were ministeriales, that is, members of a class of lower nobility, vassals of the great lords. Broadly speaking, the Minnesänger were writing and performing for their own social class at court, and should be thought of as courtiers rather than professional hired musicians. Friedrich von Hausen, for example, was part of the entourage of Friedrich Barbarossa, and died on crusade. As a reward for his service, Walther von der Vogelweide was given a fief by the Emperor Frederick II.

Several of the best known Minnesingers are also noted for their epic poetry, among them Heinrich von Veldeke, Wolfram von Eschenbach and Hartmann von Aue.

The earliest texts date from perhaps 1150, and the earliest named Minnesänger are Der von Kürenberg and Dietmar von Aist, clearly writing in a native German tradition in the third quarter of the 12th century. This is referred to as the Danubian tradition.

From around 1170, German lyric poets came under the influence of the Provençal troubadours and the Northern French trouvères. This is most obvious in the adoption of the strophic form of the canzone, at its most basic a seven-line strophe with the rhyme scheme ab|ab|cxc, and a musical AAB structure, but capable of many variations.

A number of songs from this period match trouvère originals exactly in form, indicating that the German text could have been sung to an originally French tune, which is especially likely where there are significant commonalities of content. Such songs are termed contrafacta. For example, Friedrich von Hausen's "Ich denke underwilen" is regarded as a contrafactum of Guiot de Provins's "Ma joie premeraine".

By around 1190, the German poets began to break free of Franco-Provençal influence. This period is regarded as the period of Classical Minnesang with Albrecht von Johansdorf, Heinrich von Morungen, Reinmar von Hagenau developing new themes and forms, reaching its culmination in Walther von der Vogelweide, regarded both in the Middle Ages and in the present day as the greatest of the Minnesänger.

The later Minnesang, from around 1230, is marked by a partial turning away from the refined ethos of classical minnesang and by increasingly elaborate formal developments. The most notable of these later Minnesänger, Neidhart von Reuental introduces characters from lower social classes and often aims for humorous effects.

Only a small number of Minnelied melodies have survived to the present day, mainly in manuscripts dating from the 15th century or later, which may present the songs in a form other than the original one. Additionally, it is often rather difficult to interpret the musical notation used to write them down. Although the contour of the melody can usually be made out, the rhythm of the song is frequently hard to fathom.

There are a number of recordings of Minnesang using the original melodies, as well as Rock groups such as Ougenweide performing songs with modern instruments.

In the 15th century, Minnesang developed into and gave way to the tradition of the Meistersänger. The two traditions are quite different, however; Minnesänger were mainly aristocrats, while Meistersänger usually were commoners.

At least two operas have been written about the Minnesang tradition: Richard Wagner's Tannhäuser and Richard Strauss' Guntram. 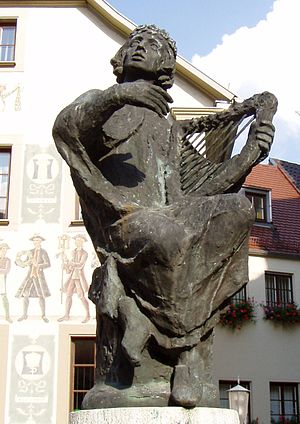 The following love poem, of unknown authorship, is found in a Latin codex of the 12th century from the Tegernsee monastery.

The standard collections are

There are separate editions of Walther's works, and of a number of the most prolific Minnesänger. There are many published selections with Modern German translation.