Mir Jafar Baghirov Abbas oglu (Azerbaijani: Mir Cəfər Bağırov Abbas oğlu; 17 September 1896 – 7 May 1956) was the communist leader of the Azerbaijan SSR from 1932 to 1953, under the Soviet leadership of Joseph Stalin.[2]

Born in Quba of Baku Governorate in 1896, Baghirov studied pedagogy in Petrovsk. During 1915-1917, M J. Baghirov worked as a school teacher in a village in Khudat.[3] During 1918 - 1921, he participated in the October Revolution and Russian Civil War in ranks of a commander of regiment, military commissar of Azerbaijani division, advisor of the Caucasus corps of the Russian military command, and the head of revolutionary tribunal of Azerbaijani division. After the Soviet takeover of Azerbaijan, Baghirov was appointed the Chairman of the Revolutionary Committee of Karabakh region of Azerbaijan. It was reported that Baghirov worked also for the Azerbaijan Democratic Republic's police. In 1927 through 1929, he served as the director of Department for Water Distribution of Transcaucasia. From February 1921 to May 1927 and December 1929 to August 1930, Baghirov was the head of state security services. 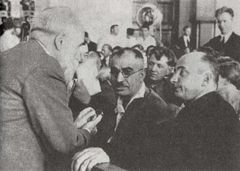 In 1932, Baghirov became the People's Commissar of Azerbaijan SSR and from 1933 to 1953 he was the first secretary of the Central Committee of the Azerbaijan Communist Party. In 1953, the bureau of the Central Committee of the Azerbaijani Communist Party appointed Baghirov to head the Council of Ministers of the Azerbaijan SSR. After Stalin's death in March 1953, Baghirov was accused of conducting repression, arrested in 1954, and tried and sentenced to death by the Military Tribunal of the Soviet Union. In his final 17-minute speech before the court, he favored the sentence and refused to apply for any pardon. Baghirov was executed in 1956.[3][4] According to some sources he was expelled to Siberia, where he later died.[citation needed]

Mir Jafar Baghirov is a controversial figure in Azerbaijani history. By 1940 an estimated 70,000 Azeris had died as a result of purges carried out under Baghirov.[5] The intelligentsia was decimated, broken, and eliminated as a social force and the old guard Communist elite was destroyed. However, Baghirov was also successful in resisting the Armenian demands to cede the Nagorno-Karabakh Autonomous Oblast of the Azerbaijan SSR to the Armenian SSR.[6]

He was credited for treating his junior son as an ordinary Soviet citizen. Baghirov sent his son, Vladimir (Jahangir) Baghirov, a military pilot, to the Soviet Army to fight against Nazi Germany, where Vladimir was killed in battle in June 1943, deliberately flying his plane into a German plane.[7]