Miracle of the Sun

The Miracle of the Sun (Portuguese: O Milagre do Sol) was an event which occurred just after midday on Sunday 13 October 1917, attended by some 30,000 to 100,000 people who were gathered near Fátima, Portugal. Several newspaper reporters were in attendance and they took testimony from many people who claimed to have witnessed extraordinary solar activity. This recorded testimony was later added to by an Italian Catholic priest and researcher in the 1940s.[citation needed]

According to these reports, the event lasted approximately ten minutes. The three children (Lúcia dos Santos, Jacinta Marto and Francisco Marto) who originally claimed to have seen Our Lady of Fátima also reported seeing a panorama of visions, including those of Jesus, Our Lady of Sorrows, Our Lady of Mt. Carmel, and of Saint Joseph blessing the people.[1]

The event was officially accepted as a miracle by the Roman Catholic Church on 13 October 1930. On 13 October 1951, the papal legate, Cardinal Tedeschini, told the million people gathered at Fátima that on 30 October, 31 October, 1 November, and 8 November 1950, Pope Pius XII himself witnessed the miracle of the sun from the Vatican gardens.[2][3] 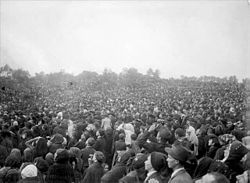 The people had gathered because three young shepherd children had predicted that at high noon the lady who had appeared to them several times would perform a great miracle in a field near Fátima called Cova da Iria. According to many witnesses, after a period of rain, the dark clouds broke and the sun appeared as an opaque, spinning disc in the sky.[4] It was said to be significantly duller than normal, and to cast multicolored lights across the landscape, the people, and the surrounding clouds. The sun was then reported to have careened towards the earth in a zigzag pattern,[4] frightening those who thought it a sign of the end of the world.[5] Witnesses reported that their previously wet clothes became "suddenly and completely dry, as well as the wet and muddy ground that had been previously soaked because of the rain that had been falling".[6]

Estimates of the number of people present range from between 30,000 to 40,000 by Avelino de Almeida, writing for the Portuguese newspaper O Século,[7] to 100,000, estimated by Dr. Joseph Garrett, professor of natural sciences at the University of Coimbra,[8] both of whom were present on that day.[9]

The event was attributed by believers to Our Lady of Fátima, a reported apparition of the Blessed Virgin Mary to the children who had made predictions of the event on 13 July 1917,[10] 19 August,[11] and 13 September.[12] The children stated that the Lady had promised them that she would on 13 October reveal her identity to them[13] and provide a miracle "so that all may believe."[14] 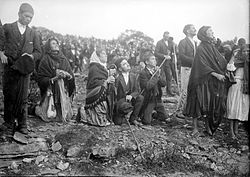 Part of the crowd looking at the sun during the event

The most widely cited descriptions of the events reported at Fatima are taken from the writings of John De Marchi, an Italian Catholic priest and researcher. De Marchi spent seven years in Fátima, from 1943 to 1950, conducting original research and interviewing the principals at undisturbed length.[15] In The Immaculate Heart, published in 1952, De Marchi reports that, "[t]heir ranks (those present on 13 October) included believers and non-believers, pious old ladies and scoffing young men. Hundreds, from these mixed categories, have given formal testimony. Reports do vary; impressions are in minor details confused, but none to our knowledge has directly denied the visible prodigy of the sun."[16]

Some of the witness statements follow below. They are taken from John De Marchi's several books on the matter.

According to De Marchi, "Engineers that have studied the case reckoned that an incredible amount of energy would have been necessary to dry up those pools of water that had formed on the field in a few minutes as it was reported by witnesses."[6]

Critical evaluation of the event

Joe Nickell notes: "Not surprisingly, perhaps, Sun Miracles have been reported at other Marian sites—at Lubbock, Texas, in 1989; Mother Cabrini Shrine near Denver, Colorado, in 1992; Conyers, Georgia, in the early to mid-1990s".[23] Nickell also suggests that the dancing effects witnessed at Fátima may have been due to optical effects resulting from temporary retinal distortion caused by staring at such an intense light.[23]

Auguste Meessen, following the work done before him by the Belgian skeptic Marc Hallet,[24] has stated sun miracles cannot be taken at face value and that the reported observations were optical effects caused by prolonged staring at the sun. Meessen contends that retinal after-images produced after brief periods of sun gazing are a likely cause of the observed dancing effects. Similarly Meessen states that the color changes witnessed were most likely caused by the bleaching of photosensitive retinal cells.[25] Meessen observes that Sun Miracles have been witnessed in many places where religiously charged pilgrims have been encouraged to stare at the sun. He cites the apparitions at Heroldsbach, Germany (1949) as an example, where many people within a crowd of over 10,000 testified to witnessing similar observations as at Fátima.[25] Meessen also cites a British Journal of Ophthalmology article that discusses some modern examples of Sun Miracles.[26] While Meessen suggests possible psychological or neurological explanations for the apparitions he notes, "It is impossible to provide any direct evidence for or against the supernatural origin of apparitions".[25] He also notes that "[t]here may be some exceptions, but in general, the seers are honestly experiencing what they report." [25]

De Marchi claims that the prediction of an unspecified "miracle", the abrupt beginning and end of the alleged miracle of the sun, the varied religious backgrounds of the observers, the sheer numbers of people present, and the lack of any known scientific causative factor make a mass hallucination unlikely.[27] That the activity of the sun was reported as visible by those up to 18 kilometres (11 mi) away, also precludes the theory of a collective hallucination or mass hysteria.[27]

Despite these assertions, not all witnesses reported seeing the sun "dance". Some people only saw the radiant colors. Others, including some believers, saw nothing at all.[28] No scientific accounts exist[clarification needed] of any unusual solar or astronomic activity during the time the sun was reported to have "danced", and there are no witness reports of any unusual solar phenomenon further than 64 kilometres (40 mi) out from Cova da Iria.[29]

Pio Scatizzi, Society of Jesus, described the events of that day on Fátima, and he concluded, identifying two possible alternatives:

The ... solar phenomena were not observed in any observatory. Impossible that they should escape notice of so many astronomers and indeed the other inhabitants of the hemisphere ... there is no question of an astronomical or meteorological event phenomenon ... Either all the observers in Fátima were collectively deceived and erred in their testimony, or we must suppose an extra-natural intervention.[30]

There are 2 other possible alternatives, that Pio Scatizzi fails to identify, and these would be that those taking part in the event were either deceived by their senses, or that they were experiencing a local natural phenomenon.[31]

Steuart Campbell, writing for the edition of Journal of Meteorology in 1989, postulated that a cloud of stratospheric dust changed the appearance of the sun on 13 October, making it easy to look at, and causing it to appear to be yellow, blue, and violet, and to spin. In support of his hypothesis, Mr. Campbell reported that a blue and reddened sun was reported in China as documented in 1983.[32] 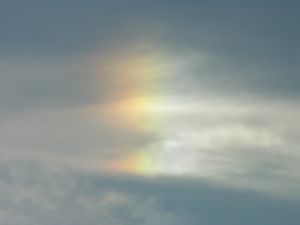 A parhelion in rainbow colors, photographed in 2005.

Joe Nickell, a skeptic and investigator of paranormal phenomena, claimed that the position of the phenomenon, as described by the various witnesses, is at the wrong azimuth and elevation to have been the sun.[33] He suggested the cause may have been a sundog. Sometimes referred to as a parhelion or "mock sun", a sundog is a relatively common atmospheric optical phenomenon associated with the reflection and refraction of sunlight by the numerous small ice crystals that make up cirrus clouds or cirrostratus clouds.

Paul Simons, in an article entitled "Weather Secrets of Miracle at Fátima", stated that he believes that it is possible that some of the optical effects at Fátima may have been caused by a cloud of dust from the Sahara.[34]

Kevin McClure claims that the crowd at Cova da Iria may have been expecting to see signs in the sun, since similar phenomena had been reported in the weeks leading up to the miracle. On this basis, he believes that the crowd saw what it wanted to see. However, none of the previous phenomena had to do with the sun; the focus, for the most part, was on the little tree where the lady was said to appear. Kevin McClure stated that he had never seen such a collection of contradictory accounts of a case in any of the research that he had done in the previous ten years, although he has not explicitly stated what these contradictions were.[35]

Leo Madigan believes that the various witness reports of a miracle were accurate. However, he alleges inconsistency in the accounts of witnesses, and he suggests that astonishment, fear, exaltation, and imagination must have played roles in both the observing and the retelling. Madigan likens the experiences to prayer, and considers that the spiritual nature of the phenomenon explains what he describes as the inconsistency of the witnesses.[36]

Stanley L. Jaki, a professor of physics at Seton Hall University in New Jersey, a Benedictine priest, and the author of a number of books dealing with the intersection of science and faith, proposed a unique theory about the supposed miracle.[28] Jaki believed that the event was natural and meteorological in nature, but that the fact the event occurred at the exact time predicted was a miracle.[28]