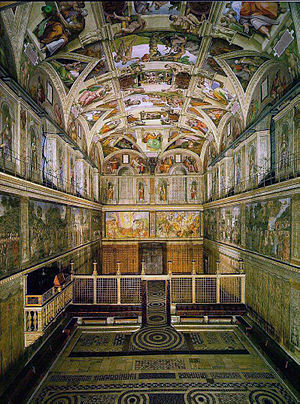 Miserere (full title: Miserere mei, Deus, Latin for "Have mercy on me, O God") is a setting of Psalm 51 (50) by Italian composer Gregorio Allegri. It was composed during the reign of Pope Urban VIII, probably during the 1630s, for use in the Sistine Chapel during matins, as part of the exclusive Tenebrae service on Holy Wednesday and Good Friday of Holy Week.

The Miserere is written for two choirs, one of five and one of four voices, and is an example of Renaissance polyphony surviving to the present day. One of the choirs sings a simple version of the original Miserere chant; the other, spatially separated, sings an ornamented commentary on this.

The Tenebrae service where the Miserere would be sung normally began at dusk, hence the name (tenebrae is Latin for "shadows" or "darkness"). During the ritual, candles would be extinguished one by one, save for the last candle which remained alight and was then hidden. Allegri envisioned the setting of the Miserere to be the final act within the first lesson of the Tenebrae service.

It was the last of twelve falsobordone Miserere settings composed and chanted at the service since 1514 and is the most popular: at some point, it became forbidden to transcribe the music and it was allowed to be performed only at those particular services, thus adding to the mystery surrounding it. Writing it down or performing it elsewhere was punishable by excommunication.[1] The setting that escaped from the Vatican is actually a conflation of verses set by Gregorio Allegri around 1638 and Tommaso Bai (also spelled "Baj"; 1650–1718) in 1714.

Three authorized copies of the work were distributed prior to 1770: to the Holy Roman Emperor, Leopold I; to the King of Portugal; and to Padre (Giovanni Battista) Martini.[1] However, none of them succeeded in capturing the beauty of the Miserere as performed annually in the Sistine Chapel. According to the popular story (backed up by family letters), the fourteen-year-old Mozart was visiting Rome, when he first heard the piece during the Wednesday service. Later that day, he wrote it down entirely from memory, returning to the Chapel that Friday to make minor corrections. Less than three months after hearing the song and transcribing it, Mozart had gained fame for the work and was summoned to Rome by Pope Clement XIV, only instead of excommunicating the boy, the Pope showered praises on him for his feat of musical genius and awarded him the Chivalric Order of the Golden Spur.[2] Some time during his travels, he met the British historian Charles Burney, who obtained the piece from him and took it to London, where it was published in 1771. The work was also transcribed by Felix Mendelssohn in 1831 and Franz Liszt, and various other 18th and 19th century sources survive. Since the lifting of the ban, Allegri's Miserere has become one of the most popular a cappella choral works now performed.[citation needed]

The original ornamentation that made the work famous were Renaissance techniques that preceded the composition itself, and it was these techniques that were closely guarded by the Vatican. Few written sources (not even Burney's) showed the ornamentation, and it was this that created the legend of the work's mystery. However, the Roman priest Pietro Alfieri published an edition in 1840 with the intent of preserving the performance practice of the Sistine choir in the Allegri and Bai compositions, including ornamentation.[citation needed]

The Miserere is one of the most often recorded examples of late Renaissance music. An early and celebrated[3] recording of it is the one from March 1963 by the Choir of King's College, Cambridge, conducted by Sir David Willcocks, which was sung in English[4] and featured the then-treble Roy Goodman. This recording was originally part of a gramophone LP recording entitled Evensong for Ash Wednesday but the Miserere has subsequently been rereleased on various compilation discs.

Historically informed recordings have been released by the Sixteen, the Tallis Scholars and, more recently, Tenebrae.

In 2015 the Sistine Chapel choir released their first ever CD, including the 1661 Sistine codex version of the Miserere recorded in the chapel itself.[5]

The original translation of the psalm used for the piece was in Latin:

This translation is from the 1662 Book of Common Prayer and is used in Ivor Atkins' English edition of the Miserere (published by Novello):

Have mercy upon me, O God

Have mercy upon me, O God, after Thy great goodness
According to the multitude of Thy mercies do away mine offences.
Wash me thoroughly from my wickedness: and cleanse me from my sin.
For I acknowledge my faults: and my sin is ever before me.
Against Thee only have I sinned, and done this evil in thy sight: that Thou mightest be justified in Thy saying, and clear when Thou art judged.
Behold, I was shapen in wickedness: and in sin hath my mother conceived me.
But lo, Thou requirest truth in the inward parts: and shalt make me to understand wisdom secretly.
Thou shalt purge me with hyssop, and I shall be clean: Thou shalt wash me, and I shall be whiter than snow.
Thou shalt make me hear of joy and gladness: that the bones which Thou hast broken may rejoice.
Turn Thy face from my sins: and put out all my misdeeds.
Make me a clean heart, O God: and renew a right spirit within me.
Cast me not away from Thy presence: and take not Thy Holy Spirit from me.
O give me the comfort of Thy help again: and stablish me with Thy free Spirit.
Then shall I teach Thy ways unto the wicked: and sinners shall be converted unto Thee.
Deliver me from blood-guiltiness, O God, Thou that art the God of my health: and my tongue shall sing of Thy righteousness.
Thou shalt open my lips, O Lord: and my mouth shall shew (= show) Thy praise.
For Thou desirest no sacrifice, else would I give it Thee: but Thou delightest not in burnt-offerings.
The sacrifice of God is a troubled spirit: a broken and contrite heart, O God, shalt Thou not despise.
O be favourable and gracious unto Sion: build Thou the walls of Jerusalem.
Then shalt Thou be pleased with the sacrifice of righteousness, with the burnt-offerings and oblations: then shall they lay calves upon Your altar.[6]