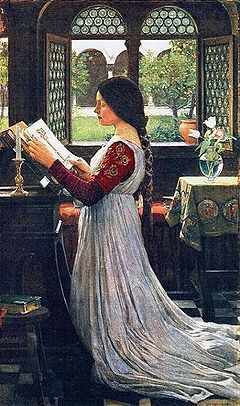 "The Missal", by John William Waterhouse

A missal is a liturgical book containing all instructions and texts necessary for the celebration of Mass throughout the year. 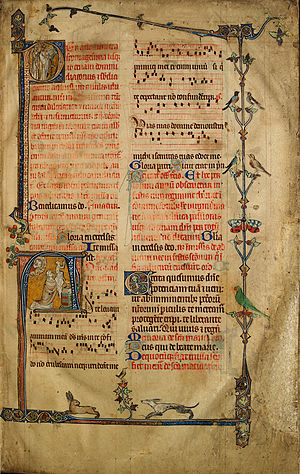 A page from the Sherbrooke Missal, one of the earliest surviving Missals of English origin

Before the compilation of such books, several books were used when celebrating Mass. These included the Gradual (texts mainly from the Psalms, with musical notes added), the Evangelary or Gospel Book, the Epistolary with texts from other parts of the New Testament, mainly the Epistles (letters) of Saint Paul, and the Sacramentary with the prayers that the priest himself said.[1]

In late mediaeval times, when it had become common in the West for priests to say Mass without the assistance of a choir and other ministers, these books began to be combined into a "Mass book" (missale in Latin), for the priest's use alone. This led to the appearance of the missale plenum ("full or complete missal"), which contained all the texts of the Mass, but without the music of the choir parts.[2] Indications of the rubrics to be followed were also added.

The Roman Missal (Missale Romanum) published by Pope St. Pius V in 1570 eventually replaced the widespread use of different missal traditions by different parts of the church, such as those of Troyes, Sarum (Salisbury), and others. Many episcopal sees had in addition some local prayers and feast days.

At the behest of the Second Vatican Council,[3] Pope Paul VI greatly increased the amount of Sacred Scripture read at Mass and, to a lesser extent, the prayer formulas. This necessitated a return to having the Scripture readings in a separate book, known as the Lectionary. A separate Book of the Gospels, with texts extracted from the Lectionary, is recommended, but is not obligatory. The Roman Missal continues to include elaborate rubrics, as well as antiphons etc., which were not in sacramentaries.

The first complete official translation of the Roman Missal into English appeared in 1973, based on the text of 1970. On 28 March 2001, the Holy See issued the Instruction Liturgiam authenticam. This included the requirement that, in translations of the liturgical texts from the official Latin originals, "the original text, insofar as possible, must be translated integrally and in the most exact manner, without omissions or additions in terms of their content, and without paraphrases or glosses. Any adaptation to the characteristics or the nature of the various vernacular languages is to be sober and discreet." The following year, the third typical edition[4] of the revised Roman Missal in Latin was released.

The fresh official English translation, prepared by the International Commission on English in the Liturgy (ICEL), was adopted by English-speaking episcopal conferences and received confirmation from the Holy See.

The text of this revised English translation of the Order of Mass is available at this website page, and a comparison between it and that at present in use in the United States is given under the heading "Changes in the People's Parts".

Within the Anglican tradition, in 1921, the Society of Saints Peter and Paul published the Anglican Missal in Great Britain.[5] The Frank Gavin Liturgical Foundation of Mount Sinai published a revised edition in 1961 and the Anglican Parishes Association continues to print it.[5]

In France missals start being illuminated from the beginning of the 13th century. At this time the missal was normally divided in several parts: calendar, temporal, preface and canon of the mass, sanctoral, votive masses and various additions. Two principal parts of the missal are temporal and sanctoral.[6] Temporal contains texts for the mass, day by day for the whole liturgical year, organized around Christmas and Easter. Sanctoral presents a liturgical year through the commemoration of the saints. Finally, votive masses (a mass for a specific purpose or read with a special intention by the priest), different prayers, new feasts, commemoration of new saints and canonizations were usually placed to the end of the missal). Iconographic analysis of the missals of the diocese of Paris during the 13th-14th centuries reveals the use of certain traditional images as well as some changing motifs. Among the former group, some types of initial letters can be named: of the introit to the first Sunday of the Advent; of this one to the preface of the mass for the Holy Week; of those to the masses for saints (containing their images, as it is the case of Saint Andrew and Saint Stephen). The last but not least is the rich illumination of two pages of the missal in its full size: Crucifixion of Jesus and Christ in Majesty. The second group with changing scenes include some images of the clergy that is not depicted in all missals, but can be also a repetitive motive appropriate to the only one manuscript. It can be the praying priest, or the priest elevating the host (sacramental bread), the singing monks etc.

For use by laypeople

The term "missal" is also used for books intended for use not by the priest but by others assisting at Mass or the service of worship. These books are sometimes referred to as "hand missals" or "missalettes", while the term "altar missal" is sometimes used to distinguish the missal for the priest's use from them. Usually they omit or severely abbreviate the rubrical portions and Mass texts for other than the regular yearly celebrations, but include the Scripture readings.

One such missal has been used for the swearing in of a United States President. After the assassination of President John F. Kennedy, Lyndon B. Johnson was sworn in as President of the United States aboard Air Force One using a missal of the late President, because it was presumed to be a Bible.[7]