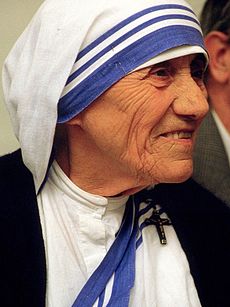 Missionaries of Charity is a Roman Catholic Latin Rite religious congregation established in 1950 by Mother Teresa. It consists of over 4,501 religious sisters. Members of the order designate their affiliation using the order's initials, "M.C." A member of the Congregation must adhere to the vows of chastity, poverty, obedience, and the fourth vow, to give "wholehearted free service to the poorest of the poor."[1]

Today, the order consists of both Contemplative and Active Branches of Brothers and Sisters over several different countries. In 1963, both the Contemplative branch of the Sisters and the Active branch of the Brothers were founded, Brothers being co-founded by then Australian Jesuit (who became Brother Andrew, M.C.) Fr Ian Travers-Ball S.J.[2] In 1979 the Contemplative branch of the Brothers was added and in 1984 a priest branch, the Missionaries of Charity Fathers,[3] was founded by Mother Teresa with Fr. Joseph Langford, combining the vocation of the Missionaries of Charity with the Ministerial Priesthood. As with the Sisters, the Fathers live a very simple lifestyle without television, radios or items of convenience. They neither smoke nor drink alcohol and beg for their food. They make a visit to their families every five years but do not take annual holidays.[4] Lay Catholics and non-Catholics constitute the Co-Workers of Mother Teresa, the Sick and Suffering Co-Workers, and the Lay Missionaries of Charity.

Missionaries care for those who include refugees, ex-prostitutes, the mentally ill, sick children, abandoned children, lepers, people with AIDS, the aged, and convalescent. They have schools run by volunteers to educate street children, they run soup kitchens, as many other services as per the communities' needs. They have 19 homes in Kolkata (Calcutta) alone which include homes for women, for orphaned children, and for the dying; an AIDS hospice, a school for street children, and a leper colony. These services are provided, without charge, to people regardless of their religion or social caste.

In 1990, Mother Teresa asked to resign as head of the Missionaries, but was soon voted back in as Superior General. On March 13, 1997, six months before Mother Teresa's death, Sister Mary Nirmala Joshi was selected the new Superior General of the Missionaries of Charity. Sister Mary Prema was elected to succeed Sister Nirmala during a general chapter held in Calcutta in April 2009.[5]

On October 7, 1950, Mother Teresa and the small community formed by her former pupils was labeled as the Diocesan Congregation of the Calcutta Diocese, and thus received the permission from the Vatican to exist as a Church subject. Their mission was to care for (in Mother Teresa's words) "the hungry, the naked, the homeless, the crippled, the blind, the lepers, all those people who feel unwanted, unloved, uncared for throughout society, people that have become a burden to the society and are shunned by everyone." It began as a small community with 12 members in Calcutta, and today it has over 4,500 Sisters running orphanages, AIDS hospices, charity centres worldwide, and caring for refugees, the blind, disabled, aged, alcoholics, the poor and homeless and victims of floods, epidemics and famine in Asia, Africa, Latin America, North America, Europe and Australia.

In 1965, by granting a Decree of Praise, Pope Paul VI granted Mother Teresa's request to expand her congregation to other countries. The Congregation started to grow rapidly, with new homes opening all over the globe. The congregation's first house outside India was in Venezuela, and others followed in Rome and Tanzania, and eventually in many countries in Asia, Africa, and Europe, including Albania. In addition, the first home of the Missionaries of Charity in the United States was established in the South Bronx, New York. In the USA, the Missionaries of Charity are affiiated with the Council of Major Superiors of Women Religious, a body of female religious, representing 20% of American nuns. They are identified by the wearing of religious habits, and loyalty to church teaching. By 1996, the Organisation was operating 517 missions in more than 100 countries and today is assisted by over one million co-workers and many donations from ordinary people.

Becoming a Missionary of Charity

It takes nine years to become a full-fledged Missionary of Charity. At the beginning, anyone interested in the life can come for a short term "come-and-see" experience. If the young women still wish to join and are still considered possible candidates by the Congregation, they enter Aspirancy, focused on learning English (which is the community language) for those who are not from English-speaking countries and deepening of their Christian life. It is followed by Postulancy (introduction into the study of the Sacred Scripture, the Constitutions of the Society, Church history, and Theology. If found suitable, they enter the Novitiate, which is the true beginning of the religious life. Novices wear white cotton habit with a girdle and white saris without the three blue stripes. In the first year (called canonical), they deepen their life of prayer and relationship with God along with their knowledge of life as a Missionary of Charity, the second year is more focused on the practical training for the mission life. After two years, they take temporary vows for one year, which are renewed annually (five years in total). They also receive the blue striped sari of the Congregation and a metal crucifix as a sign of their spousal love for Christ. In the sixth year, they travel to Rome, Calcutta or Washington D.C. for "Tertianship", a year of deep spiritual growth, at the end of which they make their final profession.

A Sister's few possessions include: three saris (one to wear, one to wash, one to mend); two or three cotton habits; a girdle; a pair of sandals; a crucifix; and a rosary. They also have a plate, a set of cutlery, a cloth napkin, a canvas bag, and a prayer book. In cold countries, nuns may own a cardigan and other articles suited to the local climate such as a coat, scarf, and closed shoes.

The quality of care offered to terminally ill patients in the Home for the Dying in Kolkata was the subject of discussion in the mid-1990s. Some British observers, on the basis of short visits, drew unfavourable comparisons with the standard of care available in hospices in the United Kingdom. Remarks made by Dr. Robin Fox relative to the lack of full-time medically-trained personnel and the absence of strong analgesics were published in a brief memoir in an issue of The Lancet in 1994. These remarks were criticised in a later issue of The Lancet on the ground that they failed to take account of Indian conditions, specifically the fact that government regulations effectively precluded the use of morphine outside large hospitals.[6] However, this defense does not take into account the ability to use codeine or the ability to take patients to hospitals, given the charity's enormous amount of financial resources which were easily in the millions of dollars.[7] A British former volunteer at the Home objected that syringes were rinsed in cold water and reused; that inmates were given cold baths; and that aspirin was administered to people with terminal cancer. Fox made no reference to any of these practices, but noted that the inmates were "eating heartily and doing well", and that the sisters and volunteers focused on cleanliness, tending wounds and sores, and providing loving kindness.[8] The use of aspirin to relieve mild pain in those suffering terminal cancer remains standard practice worldwide as approved by the WHO.[9] However, it is inappropriate to do so for stronger pain, or if the pain persists as is common for cancer patients, especially in later stages.[10] The life-span of a sterilizable needle and syringe was estimated in 1995 to be between 50 and 200 injections depending on the hardness of local water.[11] Nonetheless, the controversy remains due to the charities not sterilizing needles and failing to make proper diagnoses, as put by Dr. Jack Preger, "If one wants to give love, understanding and care, one uses sterile needles. This is probably the richest order in the world. Many of the dying there do not have to be dying in a strictly medical sense."[12]