A mistress is a relatively long-term female lover and companion who is not married to her partner, especially when her partner is married. Generally, the relationship is stable and at least semi-permanent, but the couple does not live together openly and the relationship is usually, but not always, secret. There is often also the implication (if not the fact) that the mistress is "kept" – i.e. that her lover is paying for some (and sometimes all) of her living expenses.[1][2]

The term "mistress" was originally used as a neutral feminine counterpart to "mister" or "master".[1]

Historically the term has denoted a "kept woman", who was maintained in a comfortable (or even lavish) lifestyle by a wealthy man so that she will be available for his sexual pleasure. Such a woman could move between the roles of a mistress and a courtesan depending on her situation and environment. In modern times, however, the word "mistress" is used primarily to refer to the female lover of a man who is married to another woman; in the case of an unmarried man, it is usual to speak of a "girlfriend" or "partner". Historically, a man "kept" a mistress. As the term implies, he was responsible for her debts and provided for her in much the same way as he did his wife, although not legally bound to do so. In more recent times, it is more likely that the mistress has a job of her own, and is less, if at all, financially dependent on the man.[3][better source needed]

A mistress is not a prostitute: while a mistress, if "kept", may, in some sense, be exchanging sex for money, the principal difference is that a mistress has sex with fewer men and there is not so much of a direct quid pro quo between the money and the sex act. There is usually an emotional and possibly social relationship between a man and his mistress, whereas the relationship to a prostitute is predominantly economic and sexual. It is also important that the "kept" status follows the establishment of a relationship of indefinite term as opposed to the agreement on price and terms established prior to any activity with a prostitute.[4] (There are also "kept men", both hetero- and homosexual.)

A conceptually related term is gold digger, implying a mistress who enters a personal and usually sexual relationship with a wealthy man for access to his money and property; the principal distinction from a kept woman is that the usual goal of a gold digger is marriage, either by targeting an "eligible bachelor" or seeking to lead the man into a divorce from his current spouse. (The term has also been applied to men seeking relationships with wealthy women, and to homosexual relationships involving such an imbalance of affluence.) When there is a marked age difference as well, the older male is often referred to as a sugar daddy (female equivalents: sugar mommy/momma/mama). 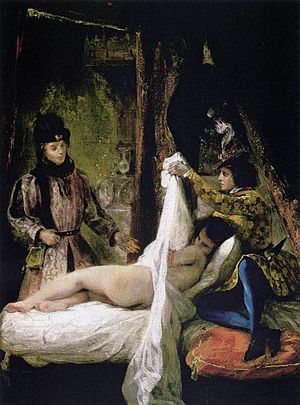 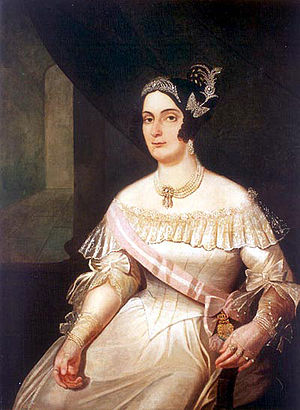 The historically best known and most-researched mistresses are the royal mistresses of European monarchs, for example, Agnès Sorel, Diane de Poitiers, Barbara Villiers, Nell Gwyn and Madame de Pompadour.[5] The keeping of a mistress in Europe was not confined to royalty and nobility but permeated down through the social ranks, essentially to any man who could afford to do so. Any man who could afford a mistress could have one (or more), regardless of social position. A wealthy merchant or a young noble might have a kept woman. Being a mistress was typically an occupation for a younger woman who, if she were fortunate, might go on to marry her lover or another man of rank.[6]

The ballad "The Three Ravens" (published in 1611, but possibly older) extolls the loyal mistress of a slain knight, who buries her dead lover and then dies of the exertion, as she was in an advanced stage of pregnancy. It is noteworthy that the ballad-maker assigned this role to the knight's mistress ("leman" was the term common at the time) rather than to his wife.[7][8]

In the courts of Europe, particularly Versailles and Whitehall in the 17th and 18th centuries, a mistress often wielded great power and influence. A king might have numerous mistresses but have a single "favourite mistress" or "official mistress" (in French, "maîtresse en titre"), as with Louis XV and Madame de Pompadour. The mistresses of both Louis XV (especially Madame de Pompadour) and Charles II were often considered to exert great influence over their lovers, the relationships being open secrets.[9] Other than wealthy merchants and kings, Alexander VI is but one example of a Pope who kept mistresses.[10] While the extremely wealthy might keep a mistress for life (as George II of England did with "Mrs Howard", even after they were no longer romantically linked), such was not the case for most kept women.[11]

In 1736, when George II was newly ascendant, Henry Fielding (in Pasquin) has his Lord Place say, "…but, miss, every one now keeps and is kept; there are no such things as marriages now-a-days, unless merely Smithfield contracts, and that for the support of families; but then the husband and wife both take into keeping within a fortnight."[12]

Occasionally the mistress is in a superior position both financially and socially to her lover. As a widow, Catherine the Great was known to have been involved with several successive men during her reign; but, like many powerful women of her era, in spite of being a widow free to marry, she chose not to share her power with a husband, preferring to maintain absolute power alone.[13]

In literature, D. H. Lawrence's work Lady Chatterley's Lover portrays a situation where a woman becomes the mistress of her husband's gamekeeper.[14] Until recently, a woman's taking a socially inferior lover was considered much more shocking than the reverse situation.

During the 20th century, as many women became better educated and more able to support themselves, fewer women found satisfaction in the position of being a mistress and were more likely to be in relationships with unmarried men.[citation needed] As divorce became more socially acceptable, it was easier for men to divorce their wives and marry the women who, in earlier years, might have been their mistresses. The practice of having a mistress continued among some married men, especially the wealthy. Occasionally, men married their mistresses. The late Sir James Goldsmith, on marrying his mistress, Lady Annabel Birley, declared, "When you marry your mistress, you create a job vacancy."[15]

For male mistress, the more general term "lover" can be used, but it does not carry the same implications. "Paramour" is sometimes used, but this term can apply to either partner in an illicit relationship, so it is not exclusively male. If the man is being financially supported, especially by a wealthy older woman or man, he is a kept man.

In 18th and 19th-century Italy, the terms cicisbeo and cavalier servente were used to describe a man who was the professed gallant and lover of a married woman. Another word that has been used for a male mistress is gigolo, though this carries connotations of brief duration and expectation of payment, i.e., prostitution. 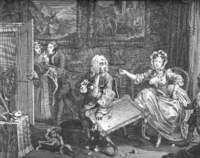 William Hogarth's A Harlot's Progress, plate 2, from 1731 showing Moll Hackabout as a mistress.

In both John Cleland's Fanny Hill and Daniel Defoe's Moll Flanders, as well as in countless novels of feminine peril, the distinction between a "kept woman" and a prostitute is all-important.[16][17]

Apologists for the practice of mistresses referred to the practice in the ancient Near East of keeping a concubine; they frequently quoted verses from the Old Testament to show that mistress-keeping was an ancient practice that was, if not acceptable, at least understandable.[18] John Dryden, in Annus Mirabilis, suggested that the king's keeping of mistresses and production of bastards was a result of his abundance of generosity and spirit.[19] In its more sinister form, the theme of being "kept" is never far from the surface in novels about women as victims in the 18th century in England, whether in the novels of Eliza Haywood or Samuel Richardson (whose heroines in Pamela and Clarissa are both put in a position of being threatened with sexual degradation and being reduced to the status of a kept object).[20]

With the Romantics of the early 19th century, the subject of "keeping" becomes more problematic, in that a non-marital sexual union can occasionally be celebrated as a woman's free choice and a noble alternative. Maryann Evans (better known as George Eliot) defiantly lived "in sin" with a married man, partially as a sign of her independence of middle-class morality. Her independence required that she not be "kept."[21][22]

Charlotte Brontë's novel Jane Eyre (1848) presents impassioned arguments on both sides of this question, as Rochester, unable to be free of his insane wife, tries to persuade Jane Eyre to live with him, which she resists.[23]

Margaret Mitchell's novel Gone with the Wind (1936) also implies that Scarlett O'Hara should be the mistress of Rhett Butler, which was thought of as prostitution by Scarlett as she said she would be no better than Belle Watling.