Mitchel Air Force Base also known as Mitchel Field, was a United States Air Force base located on the Hempstead Plains of Long Island, New York, United States. Established in 1918 as Hazelhurst Aviation Field #2, the facility was renamed later that year as Mitchel Field in honor of former New York City Mayor John Purroy Mitchel who was killed while training for the Air Service in Louisiana.

In 1917, Hazelhurst Field #2 was established south of and adjacent to Hazelhurst Field to serve as an additional training and storage base, part of the massive Air Service Aviation Concentration Center. Curtiss JN-4 Jennies became a common sight over Long Island in 1917 and 1918. Hundreds of aviators were trained for war at these training fields, two of the largest in the United States. Numerous new wooden buildings and tents were erected on Roosevelt Field and Field #2 in 1918 in order to meet this rapid expansion.[3]

Mitchel Field continued to grow after World War I and between 1929 and 1932. An extensive building program was undertaken after the war to turn the temporary wartime facilities into a permanent Army post, with new barracks, warehouses, hangar space, and administrative buildings. Much of this construction still exists today, being used for non-military purposes.

In the 1920s and 1930s, various observation, fighter, and bomber units were stationed at the airfield. It became a major aerodrome for both the Air Corps as well as various civilian activity. The 1920s was considered the golden age of air racing and on 27 November 1920, the Pulitzer Trophy Race was held at Mitchel Field. The race consisted of four laps of a 29 miles (47 km) course. Thirty-eight pilots entered and took off individually. The winner was Capt. Corliss Moseley, flying a Verville-Packard VCP-R racer, a cleaned-up version of the Army’s VCP-1 pursuit plane, at 156.54 miles (251.93 km).[4]

In October 1923, Mitchel Field was the scene of the first airplane jumping contest in the nation. During the same year, two world's airplane speed records were established there. In 1924, the airmail service had its inception in experimental flights begun at the airfield. In September 1929, Lt. Gen. James H. Doolittle, then a Lieutenant, made the world's first blind flight.[5]

In 1938, Mitchel was the starting point for the first nonstop transcontinental bomber flight, made by Army B-18 Bolos. Mitchel Field also served as a base from which the first demonstration of long-range aerial reconnaissance was made. In May 1939, three B-17s, with Lt. Curtis LeMay navigating, flew 620 miles (1,000 km) out to sea and intercepted the Italian ocean liner SS Rex. This was a striking example of the range, mobility, and accuracy of modern aviation at the time.[6][7] On September 21 of that year the base was struck by the "Long Island Express" hurricane. Flooding produced water that was over knee-deep, numerous trees were toppled and the glass was smashed atop the traffic control tower.[8]

In 1940 Mitchel Field was the location of the Air Defense Command, a command charged with the mission of developing the air defense for cities, vital industrial areas, continental bases, and military facilities in the United States (also known as the "Zone of the Interior"). Later, First Air Force, was given the responsibility for air defense planning and organization along the eastern seaboard Under its supervision an aircraft patrol system along the coast for observing shipping was placed into operation.[2] During 1943, Mitchel AAF became a staging area for Consolidated B-24 Liberator bombers and their crews before being sent overseas.[9]

Mitchel Field was a major source of supply in initial garrisoning and defense of North Atlantic air bases in Newfoundland, Greenland, and Iceland. From the airfield the planning for the air defense of Nova Scotia and Newfoundland was conducted. Antisubmarine patrol missions along the Atlantic coast were carried out in 1942 by the United States Army Air Forces Antisubmarine Command aircraft based at Mitchel.[2]

Under the direction of the First Air Force, Mitchel Army Airfield became a command and control base for both I Fighter and I Bomber Command. Tactical fighter groups and squadrons were formed at Mitchel to be trained at AAF Training Command bases (mostly in the east and southeast) before being deployed to the various overseas wartime theaters. Additionally, thousands of Army Air Force personnel were processed through the base for overseas combat duty. With the end of World War II, returning GIs were processed for separation at Mitchel.[2]

In March 1946, the headquarters of Air Defense Command was established at Mitchel Army Airfield. 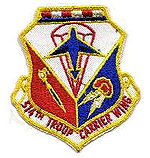 From 1949 to 1961, the Air Force Reserve's 514th Troop Carrier Wing was the main operational flying organization at Mitchel AFB (Curtiss C-46 Commando were replaced in 1954 with Fairchild C-119 Flying Boxcars.)

With the establishment of the United States Air Force as a separate service in 1947, Mitchel AAF was redesignated as Mitchel Air Force Base.

In December 1948, ADC's responsibilities were temporarily assumed by the Continental Air Command, (ConAC), also located at Mitchel AFB. ConAC also was responsible for the reorganization of the Air Force Reserve after World War II. In 1949, the reserve mission was assigned to First Air Force, which was also headquartered at Mitchel. First Air Force became the command and control organization for supervising the training of the air reserve in 15 eastern states and the District of Columbia.[2] By 1949, Mitchel was relieved of the responsibility for defending New York City because of the many problems associated with operating tactical aircraft in the urban area.[citation needed]

After Air Defense Command was re-established on January 1, 1951; the 1945 U.S. Air Defense Plan recommendation for "... moving ADC Headquarters from Mitchel Field to a more central location ... in a protected command center" was completed to Ent Air Force Base, Colorado, on 8 January 1951.[11][12] On November 29, 1952, President-elect Dwight D. Eisenhower took off from Mitchel Field on a U.S. Air Force aircraft en route to South Korea, to fulfill a campaign promise.[13] Colonel W. Millikan's transcontinental speed record flight of 4 hours, 8 minutes set in a North American F-86 Sabre on 2 January 1954 ended at Mitchel.

In April 1961 flying was halted and the unit reassigned to McGuire Air Force Base in New Jersey. With the reassignment of the 514th, Mitchel AFB was subsequently closed on 25 June 1961. The property was turned over to Nassau County for redevelopment.[3][14][15] The facility still has military housing, a commissary, and exchange facilities to support military families and activities in the area. The Garden City-Mitchel Field Secondary, a remnant of the Long Island Rail Road's Central Branch from Garden City to Bethpage, ends in the northern part of Mitchel Field, providing sporadic freight service.