Mitchell Jay Feigenbaum (born December 19, 1944) is a mathematical physicist whose pioneering studies in chaos theory led to the discovery of the Feigenbaum constants.

Feigenbaum was born in New York City,[1] to Polish and Ukrainian Jewish immigrants. He attended Samuel J. Tilden High School, in Brooklyn, New York, and the City College of New York. In 1964 he began his graduate studies at the Massachusetts Institute of Technology (MIT). Enrolling for graduate study in electrical engineering, he changed his area to physics. He completed his doctorate in 1970 for a thesis on dispersion relations, under the supervision of Professor Francis E. Low.[2]

After short positions at Cornell University and the Virginia Polytechnic Institute and State University, he was offered a longer-term post at the Los Alamos National Laboratory in New Mexico to study turbulence in fluids. Although that group of researchers was ultimately unable to unravel the currently intractable theory of turbulent fluids, his research led him to study chaotic maps.[2]

In 1983, he was awarded a MacArthur Fellowship, and in 1986, he was awarded the Wolf Prize in Physics "for his pioneering theoretical studies demonstrating the universal character of non-linear systems, which has made possible the systematic study of chaos". He is a member of the Board of Scientific Governors at The Scripps Research Institute. He has been Toyota Professor at Rockefeller University since 1986.[2] 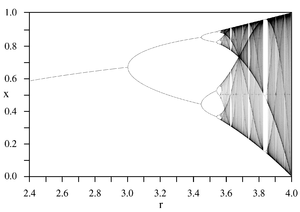 Bifurcation diagram of the logistic map. Feigenbaum noticed in 1975 that the quotient of successive distances between bifurcation events tends to 4.6692...

Some mathematical mappings involving a single linear parameter exhibit the apparently random behavior known as chaos when the parameter lies within certain ranges. As the parameter is increased towards this region, the mapping undergoes bifurcations at precise values of the parameter. At first there is one stable point, then bifurcating to an oscillation between two values, then bifurcating again to oscillate between four values and so on. In 1975, Dr. Feigenbaum, using the small HP-65 calculator he had been issued, discovered that the ratio of the difference between the values at which such successive period-doubling bifurcations occur tends to a constant of around 4.6692... He was able to provide a mathematical proof of that fact, and he then showed that the same behavior, with the same mathematical constant, would occur within a wide class of mathematical functions, prior to the onset of chaos. For the first time, this universal result enabled mathematicians to take their first steps to unraveling the apparently intractable "random" behavior of chaotic systems. This "ratio of convergence" is now known as the first Feigenbaum constant.[2]

The logistic map is a prominent example of the mappings that Feigenbaum studied in his noted 1978 article: Quantitative Universality for a Class of Nonlinear Transformations.[3]

Feigenbaum's other contributions include important new fractal methods in cartography, starting when he was hired by Hammond to develop techniques to allow computers to assist in drawing maps. The introduction to the Hammond Atlas (1992) states: 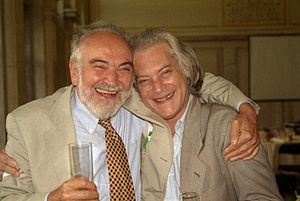 In another practical application of his work, he founded Numerix with Michael Goodkin in 1996. The company’s initial product was a software algorithm that dramatically reduced the time required for Monte Carlo pricing of exotic financial derivatives and structured products. Numerix remains one of the leading software providers to financial market participants.[5]

The press release made on the occasion of his receiving the Wolf Prize summed up his works:

The impact of Feigenbaum's discoveries has been phenomenal. It has spanned new fields of theoretical and experimental mathematics ... It is hard to think of any other development in recent theoretical science that has had so broad an impact over so wide a range of fields, spanning both the very pure and the very applied.[2]

Feigenbaum was referenced on the Season 5, Episode 15 ("A Hole in the World") of the TV series Angel. While suffering a deadly illness, the character Winnifred "Fred" Burkle -- a major protagonist, who is a physicist -- exchanges the following dialogue:

FRED: (panicked) I—I have to find him. He's the master of— I have to have Feigenbaum here.

WESLEY: Who is Feigenbaum?