Orica–GreenEDGE (UCI Team Code: OGE) is an Australian professional road race cycling team. Launched in January 2011, it competes on the UCI World Tour. The team is under the management of Andrew Ryan and Shayne Bannan with Neil Stephens and Matt White (who has returned from being stood down after admitting to doping violations with the US Postal Service cycling team)[1] as Sporting Directors.[2] The team ride Scott bikes,[3] wear Craft clothing, and wear Bollé eyewear.[4] The team has financial backing from Australian businessman Gerry Ryan[5] who owns Jayco Australia.[6]

Seventeen of GreenEDGE's 30 riders are Australian, and the team has an arrangement with the Team Jayco-AIS to act as its non-exclusive feeder team.[7] The team also has a women's team and supports its riders performing track cycling.[8]

Orica, a multinational company that provides chemicals and explosives for the mining industry, is GreenEDGE's title sponsor.[11] The team has attracted SCOTT Sports[3] as a bicycle supplier and Santini Maglificio Sportivo as suppliers of apparel.[4]

In January 2012, GreenEDGE made its debut in the Bay Classic Series in Victoria, Australia. Allan Davis won the men's classification racing for GreenEDGE's second team in the race, Mitchelton Wines/Lowe Farms, while Melissa Hoskins won the women's event.[12] The following week Simon Gerrans won the Australian National Road Race Championships in Buninyong, Victoria. He was one of 16 GreenEDGE riders in the race. Luke Durbridge won the time trial title ahead of GreenEDGE team-mate Cameron Meyer.[13][14][15] At the end of January, Gerrans won the Tour Down Under, picking up victory for GreenEDGE in its first World Tour event.[16] The team won their first major European race in the team time trial of Tirreno–Adriatico[17] following a near miss from Gerrans during Paris–Nice.[18] GreenEDGE then won their first monument when, again, Simon Gerrans won Milan–San Remo in a 3 up sprint after following the key move over the top of the final climb.[19] 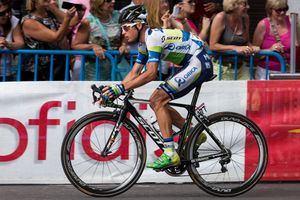 Going in to the 2013 season, Orica–GreenEDGE started at the Bay Classic Series in Victoria, Australia. Luke Durbridge won stage 2 and Mitchell Docker won the third and final stage. Defending Champion in the Women’s Event Melissa Hoskins defended her title and picked up her first win in stage 3 of the Women’s event.

With the defending champions in the Men’s and Women’s Time Trial and Road Race in the Australian National Road Race Championships Orica–GreenEDGE had high expectations to meet. Luke Durbridge went out and won the Time Trial on day one. Cameron Meyer followed that up with a solo break in the criterium. With the defending champion Simon Gerrans the favourite in the road race they were set for a clean sweep. Luke Durbridge was part of an early break in the first few kilometers. As the race progressed the other riders of the break dropped off. Luke Durbridge rode the final lap and a half solo to win by over 1 minute. New signing for 2013 Michael Matthews sprinted home to make it a one-two and a clean sweep of the Nationals.

Orica–GreenEDGE had a very successful start to the 2013 Tour de France. After avoiding much of the carnage of the first two stages, Simon Gerrans won the 3rd stage. The next day, in the team time trial, Orica–GreenEDGE took out the stage by beating Omega Pharma-Quick Step by 0.75 of a second. In the process, Gerrans took possession of the yellow jersey as the new race leader and held it for 2 days, then gave it up to teammate Daryl Impey for an additional two days.

The team started the 2014 with success, tasting overall victory at the inaugural round of the 2014 UCI World Tour, the Tour Down Under - courtesy of Simon Gerrans. New recruit Adam Yates secured his first classification win with the young riders clarification at the Tour de San Luis. Simon Clarke took the second overall victory, winning the Herald Sun Tour. In the remainder of the spring season, the team would go on to take a smattering of victories at; the Tour of the Basque Country, Tour de Romandie, Tour of Turkey. The teams most notable wins of the spring came again, courtesy of Gerrans - when he took victory at Liège–Bastogne–Liège, whilst Adam Yates continued his good early season form, winning the overall classification of the Tour of Turkey (his first pro GC victory).

Entering the first Grand Tour of the year, the Giro d'Italia, the team targeted the stage win in the Team Time Trial and stage victories with Michael Matthews (who took victory on stage 6 into Montecassino). Peter Weening took a surprise victory into Sestola on stage 9.

The team again took a smattering of stage wins as the season progressed through the summer, notching victories at; the Tour de Suisse, Tour of Slovenia, GP Industria & Artigianato di Larciano and Giro di Toscana. As the season entered the second half, Matthews would take a stage at the Vuelta a España, whilst Daryl Impey would claim the overall win in the Tour of Alberta. Gerrans would go on to take victory in the two Canadian one-day World Tour races: Grand Prix Cycliste de Québec and Grand Prix Cycliste de Montréal. The teams final victory would come from Michael Albasini, at Tre Valli Varesine.

On 28 April 2016, Simon Yates returned an adverse analytical finding for Terbutaline. Yates had been prescribed the drug to help treat his well-documented asthma, however an administration error had occurred, culminating in a therapeutic use exemption (TUE) request not being filed. Hence, he returned a positive for an banned compound. The team took full responsibility for this error, emphasising that Yates had no fault in the occurrence.[20][21]

The team is probably best known for their online videos created by Dan Jones. Their channel has been successful due to their series "Backstage Pass" which gives viewers an insight into the team and the personalities in it. As of May 3, 2016, Dan has made over 370 episodes of Backstage Pass.[22] The channel also had series such as "Bike Riders Can't Cook" and "Sunrise to Sunset" which showed fans a day in the life of a rider or staff member. The total hits on the channel is currently over 16.5 million. The most successful video so far was the teams version of Call Me Maybe by singer Carly Rae Jepsen. It has had over 1 million hits on YouTube and was also used by Eurosport to introduce the coverage of the 16th stage of the 2012 Vuelta a España.

In 2013, they made a tribute video of AC/DC famous song "You shook me all night long", though they were forced to remove it from their official channel after a complaint from the rights holders.

In 2014 Dan Jones created #SKYvOGE, a series where both Orica–GreenEDGE and Team Sky took part in a series of challenges off the bike which was also featured on Eurosport's cycling coverage of the 2014 Paris-Nice.