MHI is one of the core companies of the Mitsubishi Group. 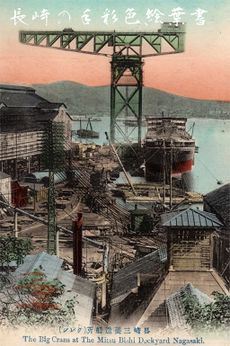 The Big Cranes at The Mitsubishi Dockyard Nagasaki, Meiji Period

In 1857, at the request of the Tokugawa Shogunate, a group of Dutch engineers began work on the Nagasaki Yotetsusho, a modern, Western-style foundry and shipyard near the Dutch settlement of Dejima, at Nagasaki.[4] This was renamed Nagasaki Seitetsusho in 1860, and construction was completed in 1861. Following the Meiji Restoration of 1868, the shipyard was placed under control of the new Government of Meiji Japan. The first dry dock was completed in 1879.

In 1884, Yataro Iwasaki, the founder of Mitsubishi, leased the Nagasaki Seitetsusho from the Japanese government, renaming it the Nagasaki Shipyard & Machinery Works and entering the shipbuilding business on a large scale. Iwasaki purchased the shipyards outright in 1887. In 1891, Mitsubishi Heavy Industries - Yokohama Machinery Works was started as Yokohama Dock Company, Ltd. Its main business was ship repairs, to which it added ship servicing by 1897.[5] The works was renamed Mitsubishi Shipyard of Mitsubishi Goshi Kaisha in 1893 and additional dry docks were completed in 1896 and 1905.[4]

The Nagasaki company was renamed Mitsubishi Shipbuilding & Engineering Company, Ltd. in 1917 and again renamed as Mitsubishi Heavy Industries in 1934. It became the largest private firm in Japan, active in the manufacture of ships, heavy machinery, airplanes and railroad cars. Mitsubishi Heavy Industries merged with the Yokohama Dock Company in 1935.[5] From its inception, the Mitsubishi Nagasaki shipyards were heavily involved in contracts for the Imperial Japanese Navy. The largest battleship Musashi was completed at Nagasaki in 1942.

In October 2009, MHI announced an order for up to 100 regional jets from the United States-based airline Trans States Holdings.[11][12]

MHI entered talks with Hitachi in August 2011 about a potential merger of the two companies, in what would have been the largest merger between two Japanese companies in history.[13][14] The talks subsequently broke down and were suspended.[15]

In June 2014 Siemens and Mitsubishi Heavy Industries announced their formation of joint ventures to bid for Alstom's troubled energy and transportation businesses (in locomotives, steam turbines, and aircraft engines). A rival bid by General Electric (GE) has been criticized by French government sources, who consider Alstom's operations as a "vital national interest" at a moment when the French unemployment level stands above 10% and some voters are turning towards the far-right.[18] 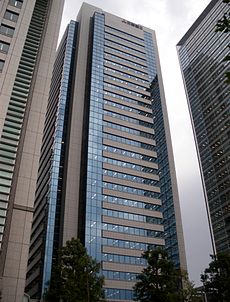 The current headquarters of Mitsubishi Heavy Industries in Shinagawa, Tokyo

In the defense sector, MHI has produced jet fighters for the Japan Air Self-Defense Force and anti-submarine helicopters for the Japan Maritime Self-Defense Force, as well as aero-engines, missiles and torpedoes. It produced 139 Mitsubishi F-15 fighter aircraft from 1981 and produced 200 Sikorsky S-70 family Mitsubishi H-60 helicopters from 1989, in both cases under license production. The company also plays an important role in the Japanese Ballistic Missile Defense System program.

In the civil aircraft sector, MHI develops and manufactures major airframe components, including fuselage panels for the Boeing 777 and composite-material wing boxes for the 787. In the space systems sector, MHI is the producer of the H-IIA and H-IIB launch vehicles, Japan's main rockets, and provides launch services to JAXA related to the launch vehicles. The company is also involved in the International Space Station program.

On 1 April 2008, MHI established Mitsubishi Aircraft Corporation as a subsidiary to develop and produce the MRJ or Mitsubishi Regional Jet, a 70 to 90 passenger regional airliner. MHI is the majority shareholder of the new company, with Toyota Motor Corporation owning 10%.[19]

In June 2014, the company joined four other major Japanese companies in signing an agreement to build parts for Boeing's 777X aircraft.[21]

In 2010 MHI commenced production of the Type 10 advanced main battle tank, at a cost of $11.3 million Dollars per unit, to replace the Type 90 tank.

The nuclear business of MHI operates facilities in the cities of Kobe and Takasago in Hyogo Prefecture and in Yokohama, Kanagawa Prefecture. It also operates a nuclear fuel manufacturing plant in Tōkai, Ibaraki which processes 440 Metric tons of Uranium per year.

MHI has also developed the Mitsubishi APWR design. MHI has also signed a memorandum of understanding with Areva for the establishment of a joint venture, Atmea, for their next reactor design ATMEA1.[22]

MHI has also been selected as the core company to develop a new generation of Fast Breeder Reactors (FBR) by the Japanese government.[23] After that announcement was made, MHI established a new company, Mitsubishi FBR Systems, Inc. (MFBR) specifically for the development and realization of FBR technology, starting what is likely to be the most aggressive corporate venture into FBR and Generation IV reactor technology.[24]

MHI is currently developing a $15.8 billion nuclear power plant in Sinop, Turkey in partnership with Itochu and Engie, which would be its first overseas nuclear project.[25]

MHI attempted to acquire the energy business of Alstom in 2014 in order to develop its service network in Southeast Asia. MHI remains interested in acquisitions in the crude oil and gas sectors as of 2015.[26] Following financial difficulties at Areva, MHI announced in 2015 it will make a proposal to take a minority ownership stake in Areva.[27] 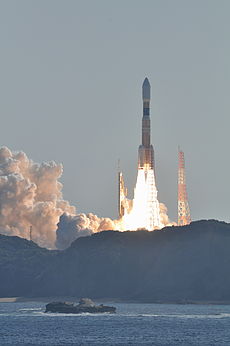 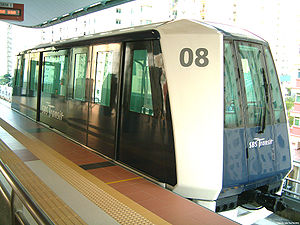 The Crystal Mover, an automated people mover manufactured by MHI for airport and light rail applications 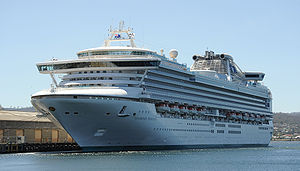