From Infogalactic: the planetary knowledge core
Jump to: navigation, search
For the French actress, see Miou-Miou.

Miu Miu is a high fashion women's clothing and accessory brand from the Prada fashion house. Opened in 1993, Miu Miu's name was conceived from Miuccia Prada's family nickname.[1] The brand is headed by Miuccia Prada.[2]

Set to launch its first fragrance in 2015, Miu Miu's new venture is backed by the signed agreement between Coty Inc and Prada SA.. This is the first time that Miu Miu has expanded outside the fashion and accessories markets.[3] 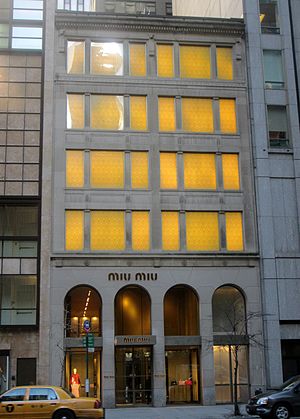 In 2012, Miu Miu launched the Women's Tales series. The campaign consisted of short films that were produced in conjunction with high-profile female directors. The outcome was a list of short, silent films that featured Miu Miu's collections.

A fifth film that debut in 2013, was written and directed by Ava DuVernay and also starred.[5]

Since 2010, Miu Miu, owned and operated by Miuccia Prada has been asked to take social responsibility on a sexual harassment and gender discrimination case. The case was reported by a former Prada employee and Miu Miu executive Rina Bovrisse, who relocated from New York to Tokyo. Bovrisse, who graduated from Parsons School of Design in New York, worked at some of the world’s largest luxury fashion companies, including Chanel Inc. and Prada USA during her 18-year fashion career. On August 2010, Prada was reviewed on gender discrimination case by UN Women CEDAW Convention on the Elimination of Discrimination Against Women.[6]

On March 14, 2013, a counter report of Prada in violating women's rights was reported to Office of the United Nations High Commissioner for Human Rights Committee on Economic, Social and Cultural Rights.[7][8] On May 17, 2013, a statement against sexual harassment and gender discrimination at workplace was released by the UN Committee.[9]

On May 28, 2013, The UN has backed former Prada employee Bovrisse over the sexual harassment and discrimination case of Prada. Vogue launched a news article, "Prada Vs The UN" with a comment, "Anyone who buys from the Prada and Miu Miu brands are supporting a culture of discrimination and power harassment."[11]

Miu Miu opened its first independent store in China in the MIX in the city of Shenzhen in 2009.[12] A new North American store was launched in Houston, Texas, in The Galleria during the summer of 2011 and in Short Hills, New Jersey, in the fall of 2011. Miu Miu also opened their first Australian boutique at Chadstone Shopping Centre in Melbourne.[13] A second opened at Westfield Sydney in 2011. A branch opened in Glasgow, Scotland, in 2010 and is situated in the Fraser's department store.[14]

Spokes-models for the brand have included:[15][16]