Maurice Alberto "Mo" Rocca (January 28, 1969) is an American humorist, journalist and actor. He is a correspondent for CBS Sunday Morning, the host and creator of My Grandmother's Ravioli on the Cooking Channel, and also the host of The Henry Ford's Innovation Nation on CBS.

Rocca was born in Washington, D.C.; his mother immigrated there from Bogotá, Colombia in 1956 at age 28, and his father is third generation Italian-American from Leominster, Massachusetts.[1] He attended Georgetown Preparatory School, the Jesuit boys' school in North Bethesda, Maryland. He graduated from Harvard University in 1991 with a bachelor of arts degree in literature.[2] He served as president of Harvard's Hasty Pudding Theatricals, performing in four of the company's notorious burlesques and co-authoring one (Suede Expectations).[3]

Rocca began his career acting on stage in the Southeast Asia tour of the musical Grease (1993) and Paper Mill Playhouse's South Pacific (1994).

His first television work was as a writer and producer for the Emmy and Peabody Award-winning children's television series Wishbone. He also wrote for The Wubbulous World of Dr. Seuss on the Nickelodeon TV channel and Pepper Ann on the ABC TV network. 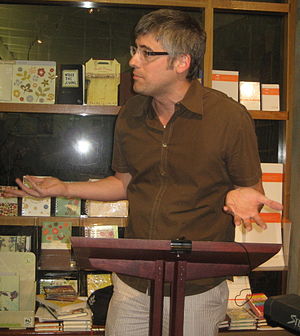 From 1998 to 2003, Rocca was a regular correspondent for The Daily Show, which gave him his start in television.[5] His work included campaign coverage for Indecision 2000 and a regular feature called "That's Quite Interesting."[6]

In 2004, he served as a convention-floor correspondent for Larry King Live at the Democratic- and Republican-party conventions.

He was a regular correspondent for The Tonight Show on the NBC TV network from 2004 to 2008, and covered the 2008 election for NBC.

Rocca is a regular correspondent to CBS Sunday Morning with Charles Osgood. His work includes cover stories, features, and profiles (such as of Chris Rock and Amy Schumer) with an emphasis on presidential history.

Rocca is a regular panelist on quiz show Wait Wait... Don't Tell Me! on the NPR radio network.

In 2012, he became a regular contributor to the then-new CBS This Morning.

Rocca's satirical novel, All the Presidents' Pets: The Story of One Reporter Who Refused to Roll Over, deals with American presidents, their pets, and reporters and was published by Crown Books in 2004.[7]

Food and other television

Rocca is the host and creator of the program My Grandmother's Ravioli on the Cooking Channel beginning in 2012,[8] for which he travels across the United States, learning to cook from grandmothers and grandfathers in their kitchens.[5]

Rocca previously hosted Food(ography) on the Cooking Channel and was a regular judge on Iron Chef America on the Food Network.

Rocca was a commentator on VH1's I Love the '70s and I Love the '80s. He was the host of Bravo's Things I Hate About You channel and Whoa! Sunday, which premiered in 2005 on the Animal Planet TV channel. He also made guest appearances on Law & Order: Special Victims Unit and Law & Order: Criminal Intent, both in 2008.

Rocca is also the host of the weekly The Henry Ford's Innovation Nation program, which has aired as part of the CBS Dream Team on Saturdays since 2014.[9]

On September 25, 2015, Rocca served as Lector during the Mass celebrated by Pope Francis at New York City's Madison Square Garden.[10]

Film and other media

Rocca appeared in the 2005 film Bewitched and, in 2007, in the independent science-fiction family comedy I'll Believe You with fellow Daily Show alumnus Ed Helms. In 2012, Rocca was the only credited cast member and the narrator of the documentary Electoral Dysfunction, a movie which satirically analyzes the American voting system.

During Pope Francis's 2015 trip to New York City, Rocca delivered a scripture reading (in Spanish) during the Mass at Madison Square Garden.[11]

His contribution to AOL Newsbloggers was titled Mo Rocca 180°: Only Half as Tedious as the Regular News.[12]

In July 2011, Rocca revealed on The Six Pack podcast (episode 73) that he is gay.[13] His participation in Pope Francis' September 2015 Mass in Madison Square Garden was thus hailed by gay rights advocates.[14]