Moberly Area Community College (commonly MACC) is a two-year college based in Moberly, Missouri, United States. In addition to the main campus in Moberly, MACC has six satellite campus sites across a large portion of Northeastern and central Missouri: Columbia, Edina, Hannibal, Kirksville, Macon, and Mexico. The college is accredited by The Higher Learning Commission of the North Central Association of Colleges and Schools.[2] In 2010 MACC enrollment was approximately 5,600 students. 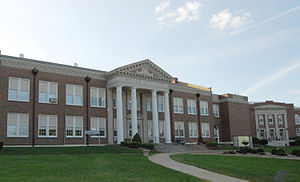 MACC was founded in 1927 as Moberly Junior College as a part of the Moberly Public School system.[3] Temporary facilities housed the classes until 1931 when a permanent building was constructed on 29 acres, which would today be the current MACC campus. The college experienced rapid growth in the 1970s and 1980s, especially after a public vote led to the establishment of a community college district encompassing a 16-county area in northern and central Missouri.[3] It was during this time period MACC gained accreditation from the North Central Association of Colleges and Schools.

Major campus improvements include the $2.5 Million dollar Fine Arts wing constructed in 1984, providing a new library, classrooms, 600-seat auditorium, and Student Commons area. The Career Center was also expanded by nearly 22,000 square feet, allowing the consolidation of all vocational programs. College Hall, later renamed Komar Hall in honor of longtime MACC President Dr. Andrew Komar, Jr., was built in 1993.[3] The large three-story structure provided space for Administrative and business offices along with new chemistry, physics, and biology classrooms and labs. Fitzsimmons-Johns Arena, named for the two most successful basketball coaches in MACC history, Cotton Fitzsimmons and Maury John, is the home court for MACC Greyhounds men's and women's basketball[4] as well as Missouri high school basketball playoff games and music concerts. One of the newest additions to the MACC-Moberly campus is the McCormick Commons and Residential Center, built in 2007. The 2,700 foot Commons provides recreational activities, a computer lab, and laundry room while also serving as the main entry to the men's and women's dorms.[5]

The current President of MACC is Dr. Jeff Lashley. Evelyn Jorgenson,Ph.D, held the position from 1996 until her retirement in June 2013. Jorgenson followed Andrew Komar, Jr., Ph.D, who oversaw major growth in the college during his 25 years as President.[6] Doctor Komar serves as President Emeritus of MACC. In November 2012 Doctor Jorgensen accepted a position as President of Northwest Arkansas Community College effective July 1, 2012.[7] On December 11, 2012 the MACC Board of Trustees announced that Jeff Lashley, Ph.D, would succeed Doctor Jorgenson as President effective July 1, 2013.[8] Doctor Lashley has been on the MACC staff since 1996, first as an instructor then as Dean of Academic Affairs and his current position of Vice-President for Instruction.[8]

Columbia - MACC began offering classes in Columbia in 1999. Since 2010, the courses have been offered at the 37,000 square foot Parkade Center, a repurposed shopping mall.[9]

Hannibal - The MACC-Hannibal Area Higher Education Center offers Associate degree coursework in Education, Graphic Arts, Early Childhood Development, and Computer Information Technology. An expansion of the Hannibal facility is being planned for the near future, with fundraising efforts between the Hannibal community and MACC ongoing.[11]

Macon - The newest of the six satellite campuses, MACC-Macon began operation in 2010 as a partnership with Central Methodist University. In addition to the two-year Associate degree programs, students can participate in programs leading to a four-year Bachelor's degree.[13]

The men's basketball team is one of the winningest programs in junior college history, with won four NJCAA Championships—in 1954, 1955, 1966, and 1967-three National runner-ups, and four third-place finishes. Overall the Greyhounds have a nation-leading 27 national tournament appearances.[15] The four championships came under the direction of well-known college and pro basketball coaches Maury John (1946-1958) and Cotton Fitzsimmons (who coached at MACC from 1958 to 1967). In addition, future Div I head coaches Charlie Spoonhour (1972-74), Dana Altman (1983-86) and Jay Spoonhour (2009-12) have led the Greyhounds. 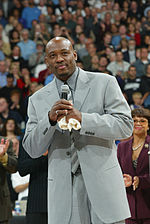 The MACC Women's team won the NJCAA National Championship in 1982, and have made 13 national tournament appearances. The Lady Greyhounds have had 21 NJCAA All-American selections. Fifty-eight players have gone on to play at the NCAA Division 1 level.[16]