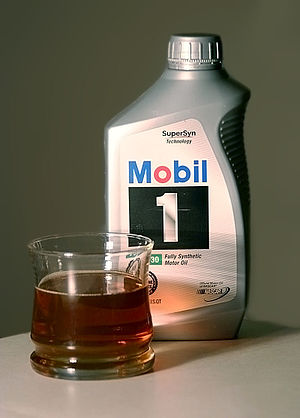 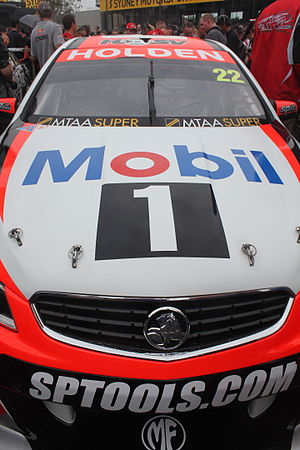 NASCAR Cup Series driver Rusty Wallace was sponsored by Mobil from 1987. In 1991, he carried his sponsorship to Penske Racing. Jeremy Mayfield had Mobil as the primary sponsorship in 1998, and later Ryan Newman and Sam Hornish Jr. took it as well. Penske's IndyCar operations also had Mobil sponsorship from 1991, until the deal was ended after the 2010 season. Since 2011, Tony Stewart has carried the Mobil 1 sponsorship in his No.14 Stewart-Haas Racing car.[3] Toyota Racing Development-supported NASCAR teams also use Mobil oil. In August 2014, Mobil 1 will sponsor Stewart-Haas driver Kevin Harvick in the GoBowling.com 400 at Pocono raceway.

Mobil was a lubricants supplier of DTM team Mercedes-AMG from 1995 until 2010. It supports Porsche and Corvette sports car programs as lubricants provider since 1996. The Bentley Continental GT3 factory cars are also sponsored by Mobil 1 since 2013.

Mobil, from 1985 to 1993, was title sponsor of Peter Brock's Holden Dealer Team and Advantage Racing that competed in the Australian Touring Car Championship and in the 1986 European Touring Car Championship. Brock from 1985 until his death in 2006, appeared in advertising for Mobil 1, including an international campaign that ran in the United States in 2000. Since Mobil has been a sponsor of the Holden Racing Team.

Mobil 1, in 2001, became the primary jersey sponsor of French Ligue 1 football side Sochaux, which was founded and is owned by the Montbéliard-based Peugeot automobile manufacturers. Sochaux has alternated in recent seasons between wearing partner brands Esso and Mobil 1 across the chest of their jerseys, favoring the latter for their 2012-13 Ligue 1 campaign.[4]