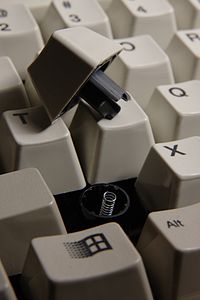 Model M is a designation for a group of computer keyboards manufactured by IBM starting in 1984, and later by Lexmark, Unicomp and MaxiSwitch. The keyboard's many variations have their own distinct characteristics, with the vast majority having a buckling-spring key design and swappable keycaps. Model M keyboards have been praised by computer enthusiasts and frequent typists due to their durability and consistency, and the tactile and auditory feedback they provide.

The Model M is also regarded as a timeless and durable piece of hardware.[1][2][3][4] Although the computers and computer peripherals produced concurrently with the Model M are considered obsolete, many Model M keyboards are still in use due to their physical durability and the continued validity of their ANSI 101-key layouts. Since their original popularity, new generations of writers and computer technicians have rediscovered their unique functionality and aesthetics.[5] The Kentucky-based company Unicomp continues to manufacture and sell Model M-style keyboards.[5] 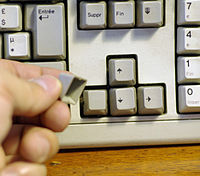 Keycap in a French Model M

The Model M was designed to be more cost effective than the Model F keyboards it replaced. Production of Model M's began in 1985; they were often bundled with new IBM computers. They were produced at IBM plants in Lexington; Greenock, Scotland and Guadalajara, Mexico. The most common Model M variant is the part number 1391401, the US English layout keyboard of the IBM PS/2. Until around 1993, most Model M's included a sturdy, coiled, detachable cable, with either an AT (pre-1987) or PS/2 connector, in 5- and 10-foot lengths (1.5 and 3 metres). From about 1994 onwards, flat non-detachable cables were used to reduce manufacturing costs; however, IBM retained its 101-key layout, never implementing the Microsoft Windows keys common on other keyboards from that time. Unicomp later designed a 104-key Model M with Windows keys.

On March 27, 1991, IBM divested a number of its hardware manufacturing operations, including keyboard manufacturing, to the investment firm Clayton & Dubilier, Inc. in a leveraged buyout to form Lexmark International Group, Inc.[6][7][8] Lexmark continued manufacturing the Model M in the United States, United Kingdom and Mexico, with IBM being Lexmark's major customer.[9] Many of these keyboards had IBM assembly part numbers such as 52G9658, 52G9700, 82G2383 and 42H1292. Due to pricing pressures, many Model M's in this period were manufactured with a new lower-cost design[10] including lighter plastic, an integrated cable, and a single color for key legends.

On March 27, 1996, Lexmark's contract to make keyboards for IBM expired, and Lexmark transitioned its keyboard business to IBM and other vendors.[11] Some of its manufacturing assets were sold to a group of Lexmark employees, who formed Unicomp. Unicomp still manufactures its version of the Model M (similar to part number 42H1292 but first renamed 42H1292U and subsequently the "Customizer"), as well as other configurations including updated 104- and 105-key layouts; a Unix layout (where the Ctrl and Caps Lock keys and Esc and tilde keys are transposed); models with integrated pointing sticks or trackballs; and POS-specific models such as those with built-in magstripe readers. When Lexmark discontinued keyboard production in March of 1996, IBM continued production in Greenock, Scotland and subcontracted production of the Model M13 keyboard (IBM Enhanced Keyboard with TrackPoint II) to Maxi Switch in Mexico. These companies stopped producing Model M's in 1999 and 1998 respectively. Although current Unicomp models may still be purchased, original production models retain their value well among collectors and computer enthusiasts.[citation needed]

The Model M's numerous variations (referred to as "part numbers") incorporated alternative features and/or colors. One of the most popular variants is the Space Saving Keyboard, which integrates the number pad into the keyboard's main section, substantially reducing its width.

IBM released the standard and Space Saving Model M's in an alternative 'gray/pebble' colour for use with their Industrial computers; this darker color was designed to conceal discoloration from handling in production environments. Other variable features include a grounded spacebar and, on some later models, drainage holes to deter damage from spilled drinks. 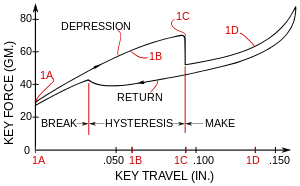 Graph of key force over key travel for a buckling spring key. Visible in graph position 1C the fast force drop when the spring buckles. U.S. Patent 4,118,611, issued to IBM in 1978

The variant most commonly referred to as "Model M" is Part No. 1391401, on which many other variants were based. This Enhanced Keyboard model included IBM's patented buckling spring design[12] and swappable keycaps.

The Model M's design has been widely praised as durable and reliable, and has remained basically the same since the 1980s, while virtually all other computing hardware, from PCs to monitors to mice, has changed dramatically.[original research?] The M's sturdy design, including its heavy steel backplate and strong plastic frame, has allowed even the most abused examples to survive for years.

The Model M's buckling spring key design gives it a unique feel and sound. Unlike more common and cheaper dome switch and membrane designs, buckling springs give users unmistakable tactile and auditory feedback. Because of its more defined touch, some users report they can type faster and more accurately on the Model M than on other keyboards.[13][14]

The Model M is also less susceptible to dirt and wear. Dirt can interfere with the proper operation of most other keyboard technologies; however, the buckling spring switch's design is such that any dirt that falls between the keys is unlikely to enter the switch mechanism, which is covered by the key. Even if dirt were to enter a mechanism, a large amount would be necessary to prevent it from operating.[citation needed]

Most Model M's, until the late 4th-generation variants, have a 1.25" slotted, circular speaker grille molded into their bottom surfaces. Relatively few contain an actual speaker, however, which was useful only for sounding beep codes on older terminal systems. (The most common Model M with a speaker is p/n 1394540, made for RS/6000 UNIX workstations.)

There are some drawbacks to the Model M design: 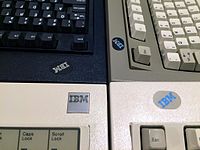 The square aluminium badge on a 1390131 series keyboard compared to other variants.