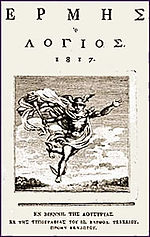 The Modern Greek Enlightenment (Greek: Διαφωτισμός, Diafotismos, "enlightenment," "illumination") was the Greek expression of the Age of Enlightenment.

The Greek Enlightenment was given impetus by the Greek predominance in trade and education in the Ottoman Empire. Greek merchants financed a large number of young Greeks to study in universities in Italy and the German states. There they were introduced to the ideas of the Enlightenment and the French Revolution.[1] It was the wealth of the extensive Greek merchant class that provided the material basis for the intellectual revival that was the prominent feature of Greek life in the half century and more leading to 1821. It was not by chance that on the eve of the Greek War of Independence the most important centres of Greek learning, schools-cum-universities, were situated in Ioannina, Chios, Smyrna (Izmir) and Ayvalik, all major centres of Greek commerce.[2]

The Phanariotes were a small caste of Greek families who took their collective name from the Phanar quarter of Constantinople where the Ecumenical Patriarchate is still housed. They held various administrative posts within the Ottoman Empire, the most important of which were those of hospodar, or prince, of the Danubian principalities of Moldavia and Wallachia. Most hospodars acted as patrons of Greek culture, education, and printing. These academies attracted teachers and pupils from throughout the Orthodox commonwealth, and there was some contact with intellectual trends in Habsburg central Europe. For the most part they supported the Ottoman system of government, too much to play a significant part in the emergence of the Greek national movement; however, their support of learning produced many highly educated Greek scholars who benefited from the cosmopolitan environment the Phanariotes cultivated in their principalities.[3]

This environment was in general a special attraction for young, ambitious and educated Greek people from the Ottoman Empire, contributing to their national enlightenment. The Princely Academies of Bucharest and Iasi also played a crucial role in this movement. Characteristically the authors of the Geographia Neoteriki, one of the most remarkable works of that era, Daniel Philippidis and Grigorios Konstantas, were both educated in this environment.[4][5]

One effect was the creation of an atticized form of Greek by linguistic purists, which was adopted as the official language of the state and came to be known as Katharevousa (purified). This created diglossia in the Greek linguistic sphere, in which Katharevousa and the vernacular idiom known as Dimotiki were in conflict until the latter half of the 20th century.[1]

The transmission of Enlightenment ideas into Greek thought also influenced the development of a national consciousness. The publication of the journal Hermes o Logios encouraged the ideas of the Enlightenment. The journal's objective was to advance Greek science, philosophy and culture. Two of the main figures of the Greek Enlightenment, Rigas Feraios and Adamantios Korais, encouraged Greek nationalists to pursue contemporary political thought.[6]

Greek Enlightenment concerned not only language and the humanities but also the sciences. Some scholars such as Methodios Anthrakites, Evgenios Voulgaris, Athanasios Psalidas, Balanos Vasilopoulos and Nikolaos Darbaris had a background in Mathematics and the Physical Sciences and published scientific books into Greek for use in Greek schools. Rigas Feraios also published an Anthology of Physics.