Mohammad Reza Aref (Persian: محمدرضا عارف ‎‎, born 19 December 1951) is an Iranian politician and academic. He was First Vice President from 2001 to 2005 under Mohammad Khatami.[1] He previously served as Minister of Technology in Khatami's first cabinet. He is currently a member of Supreme Council of the Cultural Revolution and Expediency Discernment Council. He is also an electrical engineer and a professor at University of Tehran and Sharif University of Technology. He was a candidate in the 2013 presidential election but withdrew his candidacy in order to give the reformist camp a better chance to win.[2]

He received a bachelor's degree in electronics engineering from the University of Tehran, and a master's degree and a PhD in electrical and communication engineering from Stanford University in 1975, 1976 and 1980, respectively.[3] His PhD thesis was on the information theory of networks, supervised by Thomas M. Cover.[6] He introduced and analyzed deterministic relay networks which is later termed as Aref Networks.[7] During his education at Tehran University, he led many protests and was arrested by SAVAK prior to the Iranian Revolution.

During his political career, Aref has held important positions in the Islamic Republic of Iran. Following the Islamic Revolution, he began his political career. His first major political post was in 1981 when he became vice president of communication company. He later became acting president of company in 1983 and became deputy minister of science on the following year. Aref was a faculty member of Isfahan University of Technology until 1994.

Aref, who was a professor at University of Tehran, was elected as its chancellor in 1994.[3] He began his career with creating Faculty of Social Sciences and also Institute of Geophysics. After his appointment as minister of technology, Aref was resigned as chancellor of the Tehran University in 1997.[3]

After Mohammad Khatami was elected as President of Iran, he nominated Aref as the minister of post, telegraph, and telephone that was later renamed to minister of communications and information technology. He became the first head of management and planning organization in 2000 after resigned as Minister of Communication. 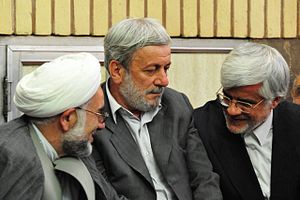 Aref during a campaign for supporting Green Movement in June 2009

Khatami was reelected in 2001 and his former vice president Hassan Habibi resigned immediately after the election. After Habibi's resignation, he appointed Aref as his First Vice President.[5] He served in this post until September 2005 and was succeeded by Parviz Dawoodi after the election of Mahmoud Ahmadinejad. Then, he served as a professor in the department of electrical engineering at Sharif University of Technology, offering courses on cryptography, coding theory, estimation theory and Information Theory. He is currently one of the members of the Expediency Discernment Council that is an advisory unit for Iran’s Supreme Leader Ali Khamenei.[5] He is also member of central leadership of Islamic Iran Participation Front.

He was nominated for parliamentary election of 2008 as the reformist front's first in the list but he withdrew in protest to rejection of some candidates by Guardian Council.[8] In June 2013, Aref announced that he together with other reformist figures are planning to launch a national party, namely Hope of Iran.[9] On the other hand, Iran's president-elect Hassan Rouhani stated that Aref will be one of his cabinet members.[10] However, Aref rejected the Rouhani's invite for a political post (Vice Presidency or Ministry of Science) to focus on his party's establishment. He also announced his interest to become one of Rouhani's advisers in politics and human rights. 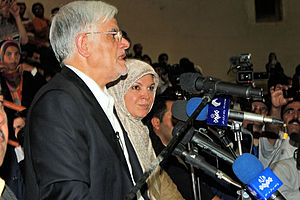 Aref and his wife in Mashhad during a campaign meeting

Aref was one of the potential candidates for the presidential elections held in June 2013.[5] He said that he would not stand if Khatami run but after Khatami declined, Aref announced that he would run in the election. He registered on 11 May 2013 and was confirmed by the Guardian Council. His major goals were lowering the unemployment rate and resolving high inflation. He pledged an extra 1 million jobs annually, which would include 200 thousand jobs from tourism development. He also added that if elected, his administration would bolster Iran’s international relations and would find a “political solution” to closing the “[nuclear] dossier once and for all”. Aref said he would remain “committed to the law” throughout the election process, promising to implement an economic plan to propel the country out of inflation and to achieve development and progress.[11] Aref censured the foreign policy of the Ahmadinejad's administration, vowing to improve Iran’s diplomatic ties with other countries if elected president. He added that the next administration can have friendly ties with the world and improve the conditions in the country through such relations. Aref also said he would pursue and implement plans to further the presence and participation of the youth in various arenas of the country. In one of his campaigns, he said: “The main characteristic of reformism is patience and broad-mindedness. The most significant feature of reformism is movement within the framework of the constitution and with due respect for norms and structures.”[12][13] Vowing to tackle unemployment, Aref said he aimed all-out development in various political, cultural, economical and social fields.

“By implementing the subsidy reform plan I will put bread on the tables. I have come to eradicate inflation and create one million job opportunities every year,”

Aref also said he is a reformist and reform means safeguarding the ideals of the Islamic Revolution, accountability and encouraging popular participation.[14] He also called for investigation of alleged fraud in the 2009 election and trial of effects in Death of Neda Agha Soltan and other deaths in the protests.

Aref announced his decision to drop out of the election in a statement issued late on 11 June, in which he said the decision was made after he received suggestions from former President Mohammad Khatami, who advised to stand aside.[15][16] He also called on the Iranian people to vote en masse in the upcoming presidential election to create a political epic and maintain the dignity of the Islamic Republic of Iran.[17]

Aref married Hamideh Moravvej Farshi in 1976.[18] Hamideh has a Ph.D in dermatology and also works at the ministry of science. They have three sons.