Mohammed I ibn Nasr (Arabic: محمد ابن الأحمر‎‎ Muḥammad ibn al-’Aḥmar) was a Nasrid ruler of the Emirate of Granada in Al-Andalus on the Iberian Peninsula, and founder of the last Muslim dynasty in Spain in 1238.

The Nasrid dynasty lasted until Muhammad XII of Granada—Boabdil surrendered to the 'Catholic Monarchs' after the 1492 Reconquista of Granada. The Nasrids constructed the Alhambra palaces in Granada.

Mohammed ibn Nasr was born in the Arjona region of the Andalusian province of Jaén in 1191.

He had at least three brothers, Yusuf and Faraj and Isma`il, the latter of whom became the governor of Málaga during Mohammed's reign (until 1257). He also enjoyed the support of a powerful Andalusian family who later became political rivals, the Ashqilula. Abu'l-Hasan 'Ali ibn Ashqilula al-Tujibi assisted Mohammed's rise to power in Arjona in 1232. Mohammed forged this alliance through marriage, by becoming either the father in law or brother in law of the Ashqilula chieftain. The alliance continued with other marriages: Abu'l-Hasan 'Ali's daughter Fatima married Yusuf ibn Nasr, a brother of Mohammed, while Abu'l-Hasan 'Ali's son Abu Ishaq Ibrahim married the Nasrid princess Mu'mina, one of Mohammed's daughters.

When Isma'il died, Mohammed ibn Al-Ahamar raised his nephews Mohammed and Abu Said Faraj, the latter of whom would become governor of Málaga in his father's place.

The family tree below shows the genealogical relationship between each sultan of the Nasrid dynasty.[1] It starts with their common ancestor, Yusuf al-Ahmar. Daughters are omitted, as are sons whose descendants never reigned. During times of rival claims to the throne, the family tree generally recognizes the sultan who controlled the city of Granada itself and the Alhambra palace. 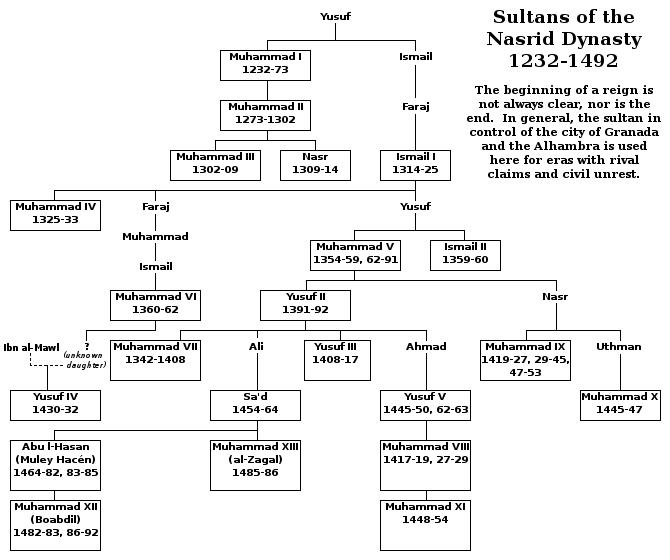