From Infogalactic: the planetary knowledge core
Jump to: navigation, search
For those of a similar name, see Mohamed V (disambiguation). 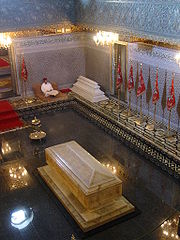 Mohammed V's tomb inside his mausoleum at Rabat, with Hassan II's tomb in the background 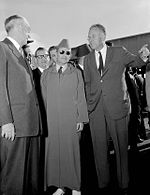 On 20 August 1953, the French who were occupying Morocco at the time forced Mohammed V and his family into exile on Corsica. His uncle, Mohammed Ben Aarafa, was placed on the throne. Mohammed V and his family were then transferred to Madagascar in January 1954. Mohammed V returned from exile on 16 November 1955, and was again recognized as Sultan after active opposition to the French protectorate. In February 1956 he successfully negotiated with France for the independence of Morocco, and in 1957 took the title of King.

During the holocaust, the pro-Nazi Vichy Government of France controlled Morocco. In 1941, they attempted to enact laws that would discriminate against Moroccan Jews, setting quotas on the number of Jewish doctors and lawyers, ejecting students from French schools and forcing many Jews living in the European quarters to move to “Jewish areas”.

Mohammed V told Jewish leaders that in his opinion Vichy laws singling out the Jews were inconsistent with Moroccan law. He believed that Jews should be treated equally with Muslims. He emphasized that the property and lives of the Moroccan Jews remained under his protection. “There are no Jews in Morocco. There are only subjects,” the King was reported to have said. In a blatant show of defiance the King insisted on inviting all the rabbis of Morocco to the 1941 throne celebrations. Due to his strong stance, Vichy administrators were unable to implement their discriminatory laws and the Jewish community was saved.

Later on, in response to anti-Jewish rhetoric in the wake of the creation of the State of Israel, Mohammed V warned Muslims not to hurt Moroccan Jews, reminding them that Jews had always been protected in Morocco. [1] 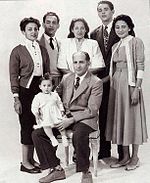 Mohammed V with his family in Madagascar, 1954.

Mohammed V was one of the sons of Sultan Yusef, who was enthroned by the French in September 1912 and his wife Lalla Yaqut, who was of Turkish origin.[2]

His first wife was Lalla Hanila bint Mamoun.[3] She was the mother of his first daughter Lalla Fatima Zohra.

He died on 26 February 1961 following complications of a surgery he received.[5]

The Mohammed V International Airport and Stade Mohamed V of Casablanca are named after him, as well as numerous universities and various public spaces across Morocco. There is an Avenue Mohammed V in nearly every Moroccan city and a major one in Tunis, Tunisia.

In December 2007, The Jewish Daily Forward reported on a secret diplomatic initiative by the Moroccan government to have Mohammed V admitted to the Righteous Among the Nations.[6]