From Infogalactic: the planetary knowledge core
Jump to: navigation, search
This article is about the Mohawk Valley region of the U.S. state of New York. For other uses, see Mohawk Valley (disambiguation). 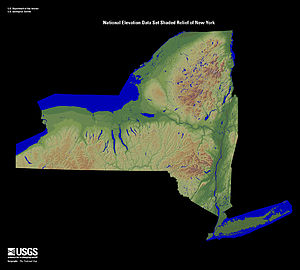 Shaded relief map of New York. The Mohawk Valley is demarked by the green lowlands running east-west across the middle of the state. 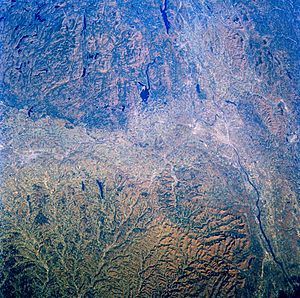 Image of the Mohawk and Hudson valleys from Space Shuttle Challenger. 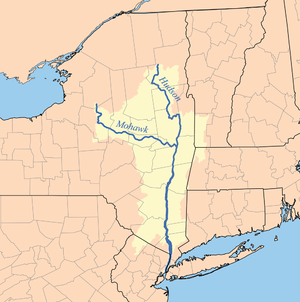 The Mohawk Valley region of the U.S. state of New York is the area surrounding the Mohawk River, sandwiched between the Adirondack Mountains and Catskill Mountains. As of the 2010 United States Census, the region's counties have a combined population of 622,133 people.

The region is a suburban and rural area surrounding the industrialized cities of Schenectady, Utica and Rome, along with other smaller commercial centers. The 5,882 square miles (15,230 km2) area is an important agricultural center and encompasses the heavily forested wilderness areas just to the north that are part of New York's Adirondack Park.

The Mohawk Valley is a natural passageway connecting the Atlantic Ocean, by way of the Hudson Valley with the interior of North America. Native American Nations of the Iroquois Confederacy lived in the region, and in the 17th century immigrants of Dutch, and the 18th century German, and Scottish settled the area, joined by Italians following the rapid industrialization of the mid-19th century. During the 18th Century, the Mohawk Valley was a frontier of great political, military and economic importance. Colonists, such as Phillip Schuyler, Nicholas Herkimer, William Johnson, trading with the Iroquois set the stage for commercial and military competition between European nations, leading to the French and Indian Wars and the American Revolution. Almost 100 battles of the American Revolution were fought in New York State, including the Battle of Oriskany and defense of Fort Stanwix. A series of raids against valley residents took place during the war; led by John Johnson they were collectively known as the "Burning of the Valleys".

The Erie Canal was completed in 1825 as the first commercial connection between the American East and West.

During the French and Indian War, the Mohawk Valley was of prime strategic importance; to the British, it provided a corridor to the Great Lakes from which to threaten New France directly, while to the French it provided a corridor to the Hudson Valley and on to the heart of British North America. In addition, many settlements of the Mohawk, Britain's crucial Indian ally at the time of the war, were located in or near the valley.

At the beginning of the war, the major British stronghold in the Mohawk corridor was Fort Oswego, located on Lake Ontario. The French captured and destroyed the fort after a short siege in 1756, and the Mohawk Valley lay open to French advance as a result. Although the French did not directly exploit this avenue of attack, its impact swayed some of the Iroquois tribes to the French side.

The original inhabitants of common day Mohawk Valley are traced back as far as 10,000 plus years and included Algonquian people that later relocated from the newly established Fort Orange Dutch trading post region as early as 1624, otherwise as the name implies, the inhabitants were and remained Mohawks. The name Mohawk Valley had its origins in the time period of 1614 and 1624-25 following the settlement of Dutch traders who established a post among the region of the Mohawk of Mohawk Valley as the Mohawk had become alliances and targets of the Indian Wars. The Mohawks of Mohawk Valley call themselves Kanien'keha'ka, and "People of the Flint" in part due to their creation story of a powerful flinted arrow. Among other things, the traditional use of Mohawk Valley flint as Toolmaking Flint is only one attribution to the Mohawk Valley People of the Flint name.