From Infogalactic: the planetary knowledge core
Jump to: navigation, search
This article is about the fungi known as mold. Slime molds and water molds are not fungi and are discussed in separate articles. For other uses, see Mold (disambiguation).

Mold growth covering a decaying peach. The frames were taken approximately 12 hours apart over a period of six days. 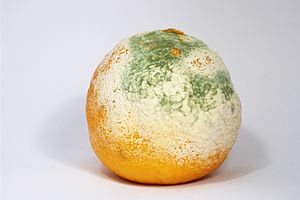 Mold growing on a clementine 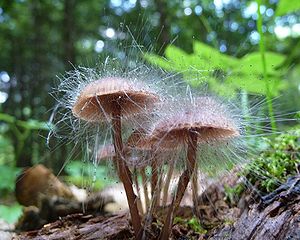 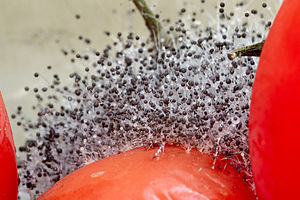 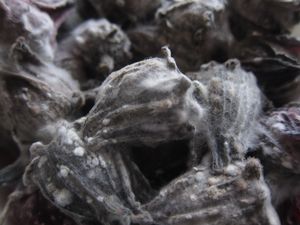 A mold (US / CA) or mould (UK / NZ / AU / ZA / IN / CA) is a fungus that grows in the form of multicellular filaments called hyphae.[1][2] In contrast, fungi that can adopt a single-celled growth habit are called yeasts.

Molds are a large and taxonomically diverse number of fungal species where the growth of hyphae results in discoloration and a fuzzy appearance, especially on food.[3] The network of these tubular branching hyphae, called a mycelium, is considered a single organism. The hyphae are generally transparent, so the mycelium appears like very fine, fluffy white threads over the surface. Cross-walls (septa) may delimit connected compartments along the hyphae, each containing one or multiple, genetically identical nuclei. The dusty texture of many molds is caused by profuse production of asexual spores (conidia) formed by differentiation at the ends of hyphae. The mode of formation and shape of these spores is traditionally used to classify molds.[4] Many of these spores are colored, making the fungus much more obvious to the human eye at this stage in its life-cycle.

Molds are considered to be microbes and do not form a specific taxonomic or phylogenetic grouping, but can be found in the divisions Zygomycota and Ascomycota. In the past, most molds were classified within the Deuteromycota.[5]

Molds cause biodegradation of natural materials, which can be unwanted when it becomes food spoilage or damage to property. They also play important roles in biotechnology and food science in the production of various foods, beverages, antibiotics, pharmaceuticals and enzymes. Some diseases of animals and humans can be caused by certain molds: disease may result from allergic sensitivity to mold spores, from growth of pathogenic molds within the body, or from the effects of ingested or inhaled toxic compounds (mycotoxins) produced by molds.[1]

There are thousands of known species of molds, which have diverse life-styles including saprotrophs, mesophiles, psychrophiles and thermophiles and a very few opportunistic pathogens of humans.[6] They all require moisture for growth and some live in aquatic environments. Like all fungi, molds derive energy not through photosynthesis but from the organic matter on which they live, utilising heterotrophy. Typically, molds secrete hydrolytic enzymes, mainly from the hyphal tips. These enzymes degrade complex biopolymers such as starch, cellulose and lignin into simpler substances which can be absorbed by the hyphae. In this way molds play a major role in causing decomposition of organic material, enabling the recycling of nutrients throughout ecosystems. Many molds also synthesise mycotoxins and siderophores which, together with lytic enzymes, inhibit the growth of competing microorganisms. Molds can also grow on stored food for animals and humans, making the food unpalatable or toxic and are thus a major source of food losses and illness.[7] Many strategies for food preservation (salting, pickling, jams, bottling, freezing, drying) are to prevent or slow mold growth as well as growth of other microbes.

Molds reproduce by producing large numbers of small spores,[6] which may contain a single nucleus or be multinucleate. Mold spores can be asexual (the products of mitosis) or sexual (the products of meiosis); many species can produce both types. Some molds produce small, hydrophobic spores that are adapted for wind dispersal and may remain airborne for long periods; in some the cell walls are darkly pigmented, providing resistance to damage by ultraviolet radiation. Other mold spores have slimy sheaths and are more suited to water dispersal. Mold spores are often spherical or ovoid single cells, but can be multicellular and variously shaped. Spores may cling to clothing or fur; some are able to survive extremes of temperature and pressure.

Although molds can grow on dead organic matter everywhere in nature, their presence is visible to the unaided eye only when they form large colonies. A mold colony does not consist of discrete organisms but is an interconnected network of hyphae called a mycelium. All growth occurs at hyphal tips, with cytoplasm and organelles flowing forwards as the hyphae advance over or through new food sources. Nutrients are absorbed at the hyphal tip. In artificial environments such as buildings, humidity and temperature are often stable enough to foster the growth of mold colonies, commonly seen as a downy or furry coating growing on food or other surfaces.

Few molds can begin growing at temperatures of 4 °C (39 °F) or below, so food is typically refrigerated at this temperature. When conditions do not enable growth to take place, molds may remain alive in a dormant state depending on the species, within a large range of temperatures. The many different mold species vary enormously in their tolerance to temperature and humidity extremes. Certain molds can survive harsh conditions such as the snow-covered soils of Antarctica, refrigeration, highly acidic solvents, anti-bacterial soap and even petroleum products such as jet fuel.[8]:22

Xerophilic molds are able to grow in relatively dry, salty, or sugary environments, where water activity (aw) is less than 0.85; other molds need more moisture.[9]

Common genera of molds include:

The Kōji (麹?) molds are a group of Aspergillus species, notably Aspergillus oryzae, and secondarily A. sojae, that have been cultured in eastern Asia for many centuries. They are used to ferment a soybean and wheat mixture to make soybean paste and soy sauce. Koji molds break down the starch in rice, barley, sweet potatoes, etc., a process called saccharification, in the production of sake, shōchū and other distilled spirits. Koji molds are also used in the preparation of Katsuobushi.

Red rice yeast is a product of the mold Monascus purpureus grown on rice, and is common in Asian diets. The yeast contains several compounds collectively known as monacolins, which are known to inhibit cholesterol synthesis.[10] A study has shown that red rice yeast used as a dietary supplement, combined with fish oil and healthy lifestyle changes, may help reduce "bad" cholesterol as effectively as certain commercial statin drugs.[11]

Some sausages, such as salami, incorporate starter cultures of molds [12] to improve flavour and reduce bacterial spoilage during curing. Penicillium nalgiovense, for example, may appear as a powdery white coating on some varieties of dry-cured sausage.

Other molds that have been used in food production include:

Alexander Fleming's accidental discovery of the antibiotic penicillin involved a Penicillium mold called Penicillium notatum (although the species identity is disputed as possibly being Penicillium chrysogenum or Penicillium rubens).[13] Fleming continued to investigate Penicillin, showing that it could inhibit various types of bacteria found in infections and other ailments, but he was unable to produce the compound in large enough amounts necessary for production of a medicine.[14] His work was expanded by a team at Oxford University; Clutterbuck, Lovell, and Raistrick, who began to work on the problem in 1931. This team was also unable to produce the pure compound in any large amount, and found that the purification process diminished its effectiveness and negated the anti-bacterial properties it had.[14]

Howard Florey, Ernst Chain, Norman Heatley, Edward Abraham, also all at Oxford, continued the work.[14] They enhanced and developed the concentration technique by using organic solutions rather than water, and created the "Oxford Unit" to measure penicillin concentration within a solution. They managed to purify the solution, increasing its concentration by 45-50 times, but found that a higher concentration was possible. Experiments were conducted and the results published in 1941, though the quantities of Penicillin produced were not always high enough for the treatments required.[14] As this was during the Second World War, Florey sought USA Government involvement. With research teams in the UK and some in the US, industrial-scale production of crystallised penicillin was developed during 1941-1944 by the USDA and by Pfizer.[13][15]

Several statin cholesterol-lowering drugs (such as lovastatin, from Aspergillus terreus) are derived from molds.[16]

The immunosuppressant drug cyclosporine, used to suppress the rejection of transplanted organs, is derived from the mold Tolypocladium inflatum.

Molds are ubiquitous, and mold spores are a common component of household and workplace dust; however, when mold spores are present in large quantities, they can present a health hazard to humans, potentially causing allergic reactions and respiratory problems.

Some molds also produce mycotoxins that can pose serious health risks to humans and animals. Some studies claim that exposure to high levels of mycotoxins can lead to neurological problems and in some cases, death.[17] Prolonged exposure, e.g. daily home exposure, may be particularly harmful. Research on the health impacts of mold has not been conclusive.[18] The term "toxic mold" refers to molds that produce mycotoxins, such as Stachybotrys chartarum, and not to all molds in general.[19]

Molds can also pose a hazard to human and animal health when they are consumed following the growth of certain mold species in stored food. Some species produce toxic secondary metabolites, collectively termed mycotoxins including aflatoxins, ochratoxins, fumonisins, trichothecenes, citrinin, and patulin. These toxic properties may be used for the benefit of humans when the toxicity is directed against other organisms; for example, penicillin adversely affects the growth of Gram-positive bacteria (e.g. Clostridium species), certain spirochetes and certain fungi.[20]

Growth in buildings and homes

Moldy housecorner from outside and inside

Mold growth in buildings can lead to a variety of health problems. Various practices can be followed to mitigate mold issues in buildings, the most important of which is to reduce moisture levels that can facilitate mold growth.[19] Removal of affected materials after the source of moisture has been reduced and/or eliminated may be necessary for remediation. 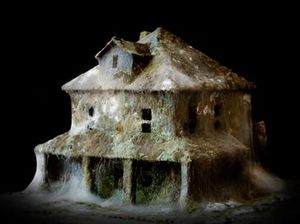 Various artists have used mold in various artistic fashions. Daniele Del Nero, for example, constructs scale models of houses and office buildings and then induces mold to grow on them, giving them a spooky, reclaimed-by-nature look. Staci Levy sandblasts enlarged images of mold onto glass, then allows mold to grow in the crevasses she has made, creating a macro-micro portrait.[21]