From Infogalactic: the planetary knowledge core
Jump to: navigation, search
For other uses, see Molding.

Molding, or moulding (Commonwealth), also known as coving (UK, Australia), is a strip of material with various profiles used to cover transitions between surfaces or for decoration. It is traditionally made from solid milled wood or plaster, but may be made from plastic or reformed wood. In classical architecture and sculpture, the molding is often carved in marble or other stones.

A "sprung" molding has bevelled edges that allow mounting between two non-parallel planes (such as a wall and a ceiling), with an open space behind the molding. Other types of molding are referred to as "plain".

At their simplest, moldings are a means of applying light- and dark-shaded stripes to a structural objects without having to change the material or apply pigments. The contrast of dark and light areas gives definition to the object.

Imagine the vertical surface of a wall lit by sunlight at an angle of about 45 degrees above the wall. Adding a small overhanging horizontal molding to the surface of the wall will introduce a dark horizontal shadow below the molding, which in consequence is called a fillet molding. Adding a vertical fillet to a horizontal surface will create a light vertical shadow. Graded shadows are possible by using moldings in different shapes: the concave cavetto molding produces a horizontal shadow that is darker at the top and lighter at the bottom; an ovolo (convex) molding makes a shadow that is lighter at the top and darker at the bottom. Other varieties of concave molding are the scotia and congé and other convex moldings the echinus, the torus and the astragal.

Placing an ovolo directly above a cavetto forms a smooth s-shaped curve with vertical ends that is called an ogee or cyma reversa molding. Its shadow appears as a band light at the top and bottom but dark in the interior. Similarly, a cavetto above an ovolo forms an s with horizontal ends, called a cyma or cyma recta. Its shadow shows two dark bands with a light interior.

Together the basic elements and their variants form a decorative vocabulary that can be assembled and rearranged in endless combinations. This vocabulary is at the core of both classical architecture and Gothic architecture.

Decorative moldings have been made of wood, stone and cement. Recently moldings made of Expanded Polystyrene (EPS) as a core with a cement-based protective coating have become popular. These moldings have environmental, health and safety concerns that were investigated by Doroudiani et al.[1] 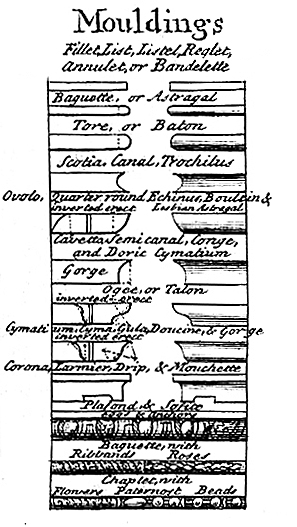 Moldings from 1728 Table of architecture in the Cyclopedia[2]

There are a variety of common moldings: