In 2014, $1 billion disappeared from three Moldovan banks: Savings Bank, Unibank and Banca Sociala.[1] The bank fraud in Moldova was a coordinated effort involving all three banks working together to extract as much loan finance as possible from the banks without any obvious business rationale. Ilan Shor, a 28-year-old Moldovan businessman and the current mayor of Orhei, "masterminded" the scam. Shor was chairman of the board at Savings Bank up to November 28, 2014.[2]

Funds worth $1 billion were transferred to United Kingdom and Hong Kong shell companies used to conceal the real owners of assets,[1][3] then deposited into Latvian bank accounts under the names of various foreigners.

The total loss from the scheme is equivalent to 12% of Moldova's GDP.[4]

A carousel borrowing scheme was applied, loans at one bank were paid off with loans from another. The massive expansion of bank lending was funded with heavy borrowing from Russian companies.

During the parliamentary hearings on the bank fraud, the Moldovan Information and Security Service deputy director, Vadim Vrabie, declared that President Nicolae Timofti knew since 2013 about the robbery at Banca de Economii, Banca Sociala and Unibank.

In 2005-2008 the financial-banking legislation was substantially modified by the Parliament specialized commission headed by Oleg Reidman, as well as the regulations of the National Bank of Moldova on the supervision of the banking sector and the tracking of financial flows. These changes weakened the banking system and exposed it to risks of fraudulent activities.

In 2007-2009 the Savings Bank have expanded their lending activities, with a significant number of the credits given at the time being not reimbursed later in 2011. In June 2012, the Moldovan Anticoruption Center was requested to investigate the involvement of institutions registered in Moldova in money laundering schemes on regional and international level, following the Sergei Magnitsky cause celebre.[5]

During this period, the three banks were the subject to significant shareholder change. Commencing August 2012, ownership of Unibank was transferred to nominees as well as political figures and individuals close to Ilan Shor.[6] In 2013 Ilan Shor bought into the ownership of Banca de Economii.[7]

The banks have expanded their lending massively, far more than their capital reserves should have allowed. According to a report of the International Monetary Fund, the normative capital of the Savings Bank decreased ten-fold in 2012, whereas the share of overdue credits increased by about 1 billion lei. The market value of its shares depreciated from 30 to 14 lei in a year.

The three banks involved in fraudulent activities were audited by Grant Thornton office in Moldova, affiliated to the global Grant Thornton in 2010, 2011, and 2013. None of the reports indicated any problems in the banks' activities. One of the company's partners is Olesea Bride, who is married to Stéphane Christophe Bridé, Moldovan minister of economy, and former managing partner of Grant Thornton Romania-Moldova.[11][12]

In the week preceding Moldovan parliamentary elections, 2014 more than $750 million were extracted from the three banks in just three days, between November 24 and 26. A van belonging to Klassica Force, a company owned by Shor, while transporting 12 sacks of bank files, was stolen and burned on November 27.[13] Records of many transactions were deleted from the banks' computers.

File:Shor ilan mironovich.jpg
Ilan Shor and his group of companies benefited from the fraudulent transactions conducted at the three banks.[14]

On November 26, 2014 the banks went bankrupt and were later placed under special administration of the National Bank of Moldova. On November 27, the Moldovan Government, headed by Prime Minister Iurie Leanca, secretly decided to bail out the three banks with $870 million in emergency loans, covered from state reserves.[1] This created a deficit in Moldovan public finances equivalent to an eighth of the country's GDP.

On January 28, 2015 the National Bank of Moldova hired the U.S. investigative consultancy Kroll to conduct an investigation of the fraud.

The auditors reviewed transactions at the three banks with missing funds in November 2014. The report documents how companies tied to Shor gradually took control of the banks and then allegedly issued massive loans to affiliated companies. It concluded the three banks transferred at least 13.5 billion lei to five Moldovan companies affiliated with the Shor group, controlled by Ilan Shor, between November 24 and 26.[6]

The Kroll report, although confidential, was leaked to the public by Adrian Candu, the speaker of the Moldovan Parliament, in May 2015.

Two senior Latvian politicians, Ainars Latkovskis (head of the Saeima's Defense, Internal Affairs and Anti-Corruption Committee) and Solvita Aboltina (head of the National Security Committee) were summoned to the US last fall and told in no uncertain terms by officials at the State Department and Treasury that Latvia needed to clean up its act.[15]

In November 2015 the Latvian banking regulator passed the harshest sentence on money laundering yet: a 2,016,830 euro fine for Privatbank, dismissal of its CEO and the responsible board member, as well as individual fines for board members. Investigation of Pasta Bank and ABLV Bank are still ongoing.[16]

ABLV Bank and PrivatBank were among the six banks named by the Latvian authorities in July 2012 to have received funds directly or indirectly from the $230 million illegal tax refund exposed by the late Sergei Magnitsky.[17]

The scandal is politically sensitive as it involved prominent politicians and business people, including Vlad Filat, the former Prime Minister of Moldova and founder of the pro-European Liberal Democratic Party of Moldova. The $1 billion bank fraud has compromised the pro-European Government and contributed to the declining popularity of the EU among Moldovans. An April 2015 poll found that 32% of Moldovans favoured joining the EU, a decrease of 46 percent compared to 78% in 2007.[18]

In March 2015, Emma Tabarta, the vice governor of the National Bank, as well as Artur Gherman, president of the National Commission for Financial Markets, were dismissed. The decision was taken in Parliament, behind closed doors, in a meeting that lasted more than eight hours.[19] Moldova’s central bank governor Dorin Dragutanu resigned in September 2015, accusing politicians of interfering into the investigation of the fraud.[20] Valeriu Strelet government was dismissed by Parliament in October 2015, after less than three months in office.[21]

As a response to the $1 billion disappearance the grass-roots citizens' movement Dignity and Truth (Romanian: Dreptate și Adevăr) was established in February 2015.[22] The movement organized a series of street demonstrations, flash mobs, sit-ins, and pickets, known as the 2015 Moldovan protests.

The protests organized by the Dignity and Truth movement were joined by the pro-Russian sympathizers, who formed a distinct camp. Both camps demand the conviction of corrupt oligarchs and early elections.[23]

Kristaps Zakulis, who for four years has headed Latvia's financial regulator the Financial and Capital Markets Commissions (FKTK) handed in his resignation amid mounting criticism that he was not tough enough on money-laundering in the country's boutique banking sector in January, 2016.[24] 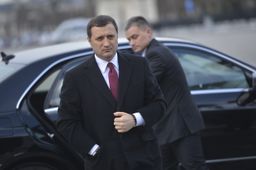 Former Prime Minister Vlad Filat, was arrested on 15 October 2015 for involvement in the bank fraud scandal.

As of late October 2015 at least 44 criminal cases regarding non-performing loans allowed by the three banks were initiated and 20 of them are currently being reviewed.

Ilan Shor was placed under house arrest on May 6, 2015 and has been charged with "abuse of office while managing a bank." [25] However, it did not prevent him from running for the public office of the mayor of Orhei in June 2015.

Vlad Filat was stripped of his immunity and handcuffed in parliament on October 15, 2015.[26] On October 18, 2015 Filat was placed in preliminary detention for 30 days, the detention period being extended for 30 more days on November 11. On October 22, 2015, Denis Urechi, the manager of ProAcvaCom, was found guilty of submitting to Savings Bank faked land assessments to obtain a loan equaling US$1.9 million back in October 2011.

Ion Rusu, the manager of Caravita Co. Business Estate Investments was sentenced to five years of imprisonment for using the companies to launder funds and commit fraud. Rusu confessed that he made fictitious transactions with the intent to hide the origin of US$3.12 million stolen from the Moldovan Savings Bank.

Rusu is brother-in-law to Vlad Filat, former Prime Minister of Moldova, and has claimed Filat is the real owner of the two companies.[27]

Pirkka Tapiola, the European Union’s ambassador to Moldova, said at a news conference in Chisinau: "I do not have an answer for you on how it is possible to steal so much money from a small country."

Congresswoman Sheila Jackson Lee said: "I call upon the Administration and the Congress to investigate whether assets of the national banks of countries of the former Soviet Union are not being plundered and used, knowingly or unknowingly, to benefit terrorist organizations."

Romania offered Moldova emergency economic aid and a loan of $65 million. Romanian Prime Minister Dacian Ciolos said that to get the money, Moldova will have to reform its justice system, fight corruption, sign a draft agreement for a loan from the International Monetary Fund, and appoint a new central bank governor.

In response to the $1 billion bank fraud, the EU, International Monetary Fund and World Bank have frozen their financial assistance to Moldova.[28]