The Monday demonstrations in East Germany in 1989 and 1990 (German: Montagsdemonstrationen) were a series of peaceful political protests against the government of the German Democratic Republic (GDR) that took place every Monday evening. 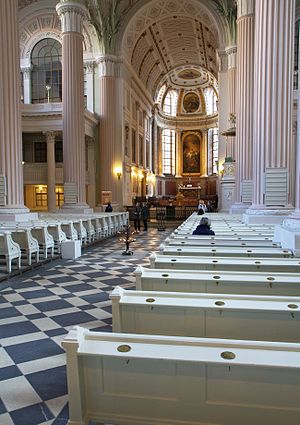 Demonstrators with banners. This demonstration took place after the fall of the wall.

In Leipzig the demonstrations began on 4 September 1989 after the weekly Friedensgebet (prayer for peace) in the St. Nicholas Church (Nikolaikirche) with parson Christian Führer, and eventually filled the nearby Karl Marx Square (today known again as Augustusplatz). Safe in the knowledge that the Lutheran Church supported their resistance, many dissatisfied East German citizens gathered in the court of the church, and non-violent demonstrations began in order to demand rights such as the freedom to travel to foreign countries and to elect a democratic government.

Informed by West German television and friends about the events, people in other East German cities began repeating the Leipzig demonstration, meeting at city squares on Monday evenings. A major turning point was the events in the West German Embassy of Prague, where thousands of East Germans had fled in September, living there in conditions reminiscent of the Third World. Hans-Dietrich Genscher had negotiated an agreement that allowed them to travel to the West, in trains that had to pass first through the GDR. Genscher's speech from the balcony was interrupted by a very emotional reaction to his announcement. When the trains passed Dresden's central station in early October, police had to stop people from trying to jump on the trains.

By 9 October 1989, just after the 40th anniversary celebrations of the GDR, what had begun as a few hundred gatherers at St. Nicholas' Church had swelled to more than 70,000 (out of the city's population of 500,000), all united in peaceful opposition to the regime. The most famous chant became Wir sind das Volk! ("We are the people!"), reminding their leaders that a democratic republic has to be ruled by the people, not by an undemocratic party claiming to represent them.

Although some demonstrators were arrested, the threat of large-scale intervention by security forces never materialised as local leaders (SED party leader Helmut Hackenberg and Generalmajor Gerhard Straßenburg of the armed police), without precise orders from East Berlin and surprised by the unexpectedly high number of citizens, shied away from causing a possible massacre, ordering the retreat of their forces. Later, Egon Krenz claimed it was he who gave the order not to intervene.

The next week, in Leipzig on 16 October 1989, 120,000 turned up, with military units again being held on stand-by in the vicinity. The next week, the number more than doubled to 320,000. This pressure led to the fall of the Berlin Wall on 9 November 1989, marking the imminent fall of the socialist GDR regime.

The demonstrations eventually ended in March 1990, around the time of the first free multi-party elections on all-GDR level, for the Volkskammer parliament that paved the way to German reunification.

Years later, Monday demonstrations were also held in the 2000s as a protest against the Iraq war, against social security changes (Hartz IV), and since the fall of 2009 against the Stuttgart 21 project. In 2014, Monday demonstrations called "Vigils for Peace", focusing especially on the U.S. Federal Reserve System, were held in Germany in response to the crisis in Ukraine.