Adrienne Monique Coleman (born November 13, 1980),[1] known professionally as Monique Coleman, is an American actress, dancer, singer, entrepreneur, and philanthropist best known for her co-starring role in Disney's High School Musical movies, in which she plays Taylor McKessie. Coleman also had a recurring role on The Suite Life of Zack & Cody, as a school girl named Mary–Margaret, along with Vanessa Hudgens. She also competed in the third edition of ABC's Dancing with the Stars, finishing in fourth place. Most recent, Coleman was named the first ever UN Youth Champion for the International Year of Youth and is currently on a world tour to raise awareness of challenges facing youth. Coleman launched her online talk show Gimme Mo', a show dedicated to empowering today's youth on September 8, 2010.

Coleman was born Adrienne Monique Coleman in Orangeburg, South Carolina.[2] She started her acting career in theatre and television at a very young age in Columbia, South Carolina. She currently lives in Los Angeles. Her training began at the Workshop Theatre School of Dramatic Arts where she performed in over 15 plays.[3] An acting class taught by a guest teacher actually turned out to be an audition, and resulted in her booking her first commercial. Then Coleman began auditioning for anything she could in the Southeast region, landing several local and regional commercials, as well as a few supporting roles in films. In addition to acting, Coleman was very involved in her community and school where she did everything from performing in plays to competing in forensic tournaments, volunteering with abused children, running track, and even cheerleading .

Monique Coleman went to Heathwood Hall Episcopal School. Then she attended The Theatre School at DePaul University in Chicago, earning her BFA in Acting in 2002.

Coleman made her first lead in the independent feature entitled Mother of the River[4] which was shot in the historic Charleston, South Carolina. The film won numerous awards at film festivals in Chicago. Two years later, Coleman appeared as Young Donna in The Family Channel Movie The Ditch digger's Daughters[5] for which she was nominated for a Young Artists Award of Hollywood. During her sophomore year of high school, Coleman wrote, directed, produced, and starred in her own one-person play entitled "Voices from Within" with standing room only – audience numbering in the hundreds. On stage in Chicago, Coleman starred in productions of Noises Off, Polaroid Stories, The Real Thing and The Colored Museum.[6]

In 2005, Coleman had the honor of working opposite one of her heroes – the legendary James Earl Jones when she played Leesha in the 2005 Hallmark TV Movie The Reading Room.[7] She received a 2006 Camie Award for the role and represented the film at the NAACP Image Awards.[8] 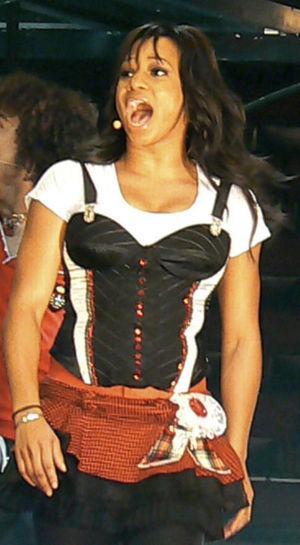 Coleman during the High School Musical: The Concert

In 2006, Coleman rose to prominence in High School Musical, where she portrayed Taylor McKessie, the best friend of the new girl, Gabriella Montez (Vanessa Hudgens). Before then, she was a recurring guest star in The Suite Life of Zack & Cody episodes, "Forever Plaid", "Not So Suite 16", "Neither a Borrower Nor a Speller Bee" and "A Prom Story" along with Hudgens. Coleman has had seven other guest appearances on television including, Boston Public, Gilmore Girls, Malcolm in the Middle, Strong Medicine, 10-8: Officers on Duty, Married to the Kellys, and Veronica Mars. Coleman was also in the first ever Disney Channel Games in 2006, on the Blue Team (with Brenda Song, Corbin Bleu, Cole Sprouse, Vanessa Hudgens, and Jason Earles and Brandon Baker). She won with both teams.

She showcased her ballroom skills in "Dance With Me", while she partnered with National Youth Latin Champion Jared Murillo. Drew Seeley was the soloist. She is the host of 3 Minute Game Show: High School Musical Edition on Disney Channel. She recorded a song called "Christmas Vacation" for the holiday album entitled A Disney Channel Holiday. In 2007, she appeared in High School Musical 2 and voiced the Winx Club character Layla/Aisha in the live-action film Secret of the Lost Kingdom. In 2008, she again repeated her role as Taylor McKessie in High School Musical 3.

Dancing with the Stars

Coleman competed in the Fall 2006 third edition of ABC's Dancing with the Stars reality dance competition. She was paired with professional partner Louis van Amstel throughout the competition. van Amstel and the judges praised her for "taking risks" during the competition. The pair appeared on The Ellen DeGeneres Show before they were eliminated and performed the same dance they performed in week 2's episode. She was eliminated from Dancing With The Stars on November 1, 2006, finishing fourth in the competition. She was the last female in the contest that year.[9] Coleman was very gracious in defeat, and appeared on the Jimmy Kimmel Live! show on the same night as the Results Show to thank her fans for their votes and support.[10] In the beginning of late December 2007, Coleman partook in the Dancing with the Stars tour that took her across America along with other former competitors until early February 2008. 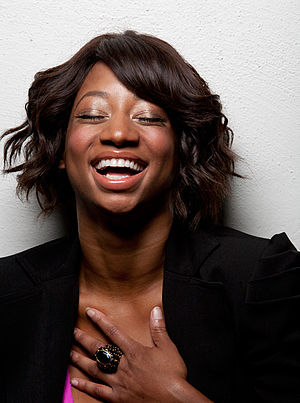 Gimme Mo' is an online platform to inspire and motivate today's youth, created and executive produced by actress Coleman. GimmeMo's goal is to create an environment where teens feel safe and open to talking about real issues, bringing awareness to organizations that are serving teens, and conducting celebrity interviews to spotlight Hollywood's commitment to giving back. GimmeMo’ knows that young people are constantly on the web, so they want to meet them where they are and provide them with inspiration, resources and positive information.

“Having traveled across America and to 24 counties as the first-ever UN Youth Champion, I’m inspired by the desire of young people everywhere to make the world a better place. At GimmeMo’, our goal is to build a global community of enlightened young people — those who wish to be the change they wish to see in the world, to borrow a phrase from Gandhi — and to raise awareness surrounding some of the biggest challenges that Millennials face both in the U.S. and around the world.” —Monique Coleman

At a ceremony at UN headquarters in New York, Coleman was presented with a letter of recognition of her new role by Assistant Secretary-General Jomo Kwame Sundaram of the Department of Economic and Social Affairs.In presenting the letter, Mr. Sundaram said Coleman will work “to raise awareness about the challenges young people face and will highlight the positive contribution they make to their communities.” Coleman said that receiving the designation of Youth Champion was “beyond an honour” and that she would use her new position to promote global efforts to achieve the anti-poverty Millennium Development Goals (MDGs), which have a 2015 deadline, with a special emphasis on the empowerment of youth. The International Year was launched on August 12 and runs through August 11, 2011, and among its aims is to advance the participation of young people on global, regional and national issues that affect them.

Coleman worked with dosomething.org[12] to produce a "Do Something U" video tutorial. The video targets young activists who need a bit of guidance and inspiration to help them carry out their ideas for their communities to fruition. Coleman's video tutorial focused on teaching youth the best way to utilize social media to spread word of ideas and actions.[13]