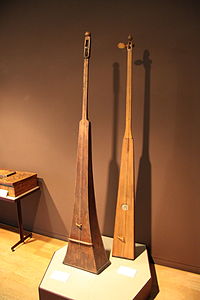 A monochord is an ancient musical and scientific laboratory instrument. It is also the class-name for any musical stringed instrument having only one string (such as the Vietnamese Đàn bầu). The word "monochord" comes from the Greek and means literally "one string." In a true monochord, a single string is stretched over a sound box. The string is fixed at both ends while one or many movable bridges are manipulated to demonstrate mathematical relationships between sounds.

The monochord can be used to illustrate the mathematical properties of musical pitch. For example, when a monochord's string is open it vibrates at a particular frequency and produces a pitch. When the length of the string is halved, and plucked, it produces a pitch an octave higher and the string vibrates at twice the frequency of the original (2:1)

Play (help·info). Half of this length will produce a pitch two octaves higher than the original—four times the initial frequency (4:1)—and so on. Standard diatonic Pythagorean tuning (Ptolemy’s Diatonic Ditonic) is easily derived starting from superparticular ratios, (n+1)/n, constructed from the first four counting numbers, the tetractys, measured out on a monochord.[citation needed]

The name "monochord" is sometimes incorrectly applied to an instrument with one open string and a second string with a movable bridge; however, such a two-string instrument is properly called a bichord. With two strings you can easily demonstrate how various musical intervals sound. Both open strings are tuned to the same pitch, and then the movable bridge is put in a mathematical position to demonstrate, for instance, the major third (at 4/5th of the string length)

Monopipe is a wind instrument which serves the same purpose as the monochord.

In 1618, Robert Fludd devised a mundane monochord (also celestial or divine monochord) that linked the Ptolemaic universe to musical intervals. An image of the celestial monochord was used on the 1952 cover of Anthology of American Folk Music by Harry Everett Smith and in the 1977 book The Cosmographical Glass: Renaissance Diagrams of the Universe (p. 133) by S. K. Heninger, Jr., ISBN 978-0-87328-208-6. A reproduction of the monochordum mundanum (mundane monochord) illustration from page 90 of Robert Fludd's "Utriusque Cosmi, Maioris scilicet et Minoris, Metaphysica, Physica, Atque Technica Historia" ("Tomus Primus"), 1617, was used as the cover art for Kepler Quartet's 2011 audio CD, Ben Johnston: String Quartets Nos. 1, 5 & 10 (New World Records Cat. No. 80693), which is classical music that uses pitch ratios extended to higher partials beyond the standard Pythagorean tuning system.

A modern playing technique used in experimental rock as well as contemporary classical music is 3rd bridge. This technique shares the same mechanism as used on the monochord, by dividing the string into two sections with an additional bridge.