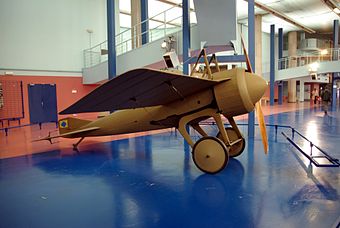 Monocoque (/ˈmɒnoʊkɒk/ or /ˈmɒnoʊkoʊk/) is a structural approach whereby loads are supported through an object's external skin, similar to an egg shell. The technique may also be called structural skin. The word monocoque is a French term for "single shell" or (of boats) "single hull".[1] 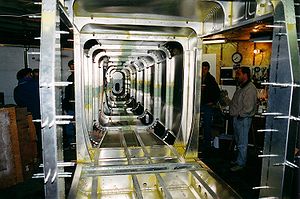 View of the inside of the tail of a Murphy Moose homebuilt aircraft under construction, showing the semi-monocoque design

Early aircraft were constructed using frames, typically of wood or steel tubing, which could then be covered (or skinned) with fabric[3] such as irish linen or cotton.[4] The skin added nothing to the structural strength of the airframe and was dead weight beyond providing a smooth sealed surface. By thinking of the airframe as a whole, and not just the sum of its parts, monocoque structures made sense and various companies soon adopted practices from the boat industry such as laminating thin strips of wood. In 1912, Deperdussin introduced a monocoque racer using a fuselage made up of three layers of laminated strips of glued poplar veneer, which provided both the external skin and the main load-bearing structure.[5] This reduced drag so effectively it was able to win most of the races it was entered into.[5] This style of construction was copied, with some variations, in Germany by LFG Roland — licensed by them to Pfalz Flugzeugwerke in the so-called, patented Wickelrumpf (wrapped body) form using two layers of plywood strips and fabric wrapping between them over a male mold for each half of the fuselage surface "shell"; while Albatros, Hannover and Siemens-Schuckert used four-sided panels of plywood instead, covering the light internal framework working forward from the tail, and upwards from the ventral side of the structure. However, it was prone to damage from moisture and delamination.[6] 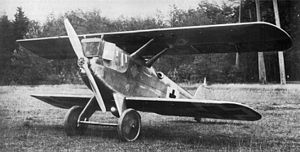 The Zeppelin-Lindau (Do) D.I, the first production all metal monocoque

While all metal aircraft from the Junkers firm had appeared as early as 1915, these were not monocoques but added a metal skin to an underlying framework. The first metal monocoques were built by Claudius Dornier, while working for Zeppelin-Lindau.[7] He had to overcome a number of problems, not least was the quality of aluminium alloys strong enough to use as structural materials, which frequently formed layers instead of presenting a uniform material.[8] After failed attempts with several large flying boats in which a few components were monocoques, he built the Zeppelin-Lindau V1 to test out a monocoque fuselage. Although it crashed, he learned a lot from its construction, and the Zeppelin-Lindau D.I was built in 1918, and although too late for operational service during the war, was the first all metal monocoque aircraft to enter production.[9] In parallel to Dornier, Zeppelin also employed Adolf Rohrbach, who built the Zeppelin-Staaken E-4/20, which when it flew in 1919 became the first multi-engined monocoque airliner, before being destroyed under orders of the Inter-Allied Commission. At the end of WW1, the Inter-Allied Technical Commission published details of the last Zeppelin-Lindau flying boat showing its monocoque construction, which may have inspired several designers, including Oswald Short, who built a number of experimental metal monocoque aircraft starting with the 1920 Short Silver Streak in an attempt to convince the air ministry of its superiority over the current wooden construction. Despite its advantages, aluminum monocoques would only begin to become common in the late 1930s as a result of a number of factors, including design conservatism, higher speeds and production labor costs. 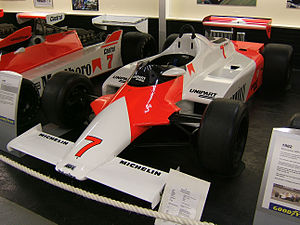 The aluminum alloy monocoque chassis was first used in the 1962 Lotus 25 Formula 1 race car. Commercial car bodies are almost never monocoques; instead most cars use a method called variously unibody/unitary construction/unitary body/chassis or body frame integral, construction,[10] which uses box sections, bulkheads and tubes providing most of the strength of the vehicle, while the skin adds relatively little strength or stiffness. The term monocoque is frequently misused when referring to unibody cars.[11]

In motor racing, the safety of the driver depends on the car body which must meet stringent regulations and a few cars have been built with monocoque structures.[12][13] McLaren was the first to utilize carbon-fiber-reinforced polymers to construct the monocoque of the 1981 McLaren MP4/1, and in 1992 the McLaren F1 became the first production car with a carbon-fiber monocoque.[14]

Tanks and other armored vehicles such as the German Fuchs 2 and RG-33 may use a body which is built of armor rather than attaching armor to a frame. This reduces weight for a given amount of armor compared to vehicles to which armor has been attached to an underlying frame. 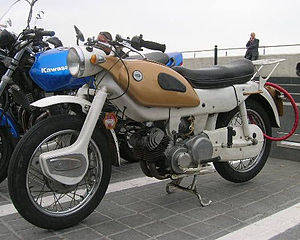 Between 1958 and 1965 the UK firm Ariel Motorcycles manufactured two production monocoque motorcycle models, the Ariel Leader and its sibling, the Ariel Arrow.

A monocoque-framed motorcycle was developed by the Spanish motorcycle manufacturer, Ossa, for the 1967 Grand Prix motorcycle racing season.[16] 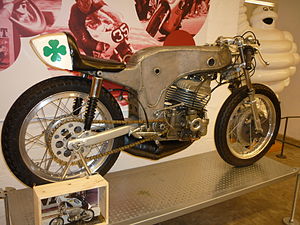 Although the single-cylinder Ossa had 20 horsepower (15 kW) less than its rivals, it was 45 pounds (20 kg) lighter and its monocoque frame was much stiffer than conventional motorcycle frames, giving it superior agility on the racetrack.[16] Ossa won four Grand Prix races with the monocoque bike before their rider was killed during the 1970 Isle of Man TT, causing the Ossa factory to withdraw from Grand Prix competition.[16]

Notable designers such as Eric Offenstadt and Dan Hanebrink created unique monocoque designs in the early 1970s.[17] The 1973 Isle of Man TT was won by Peter Williams on the monocoque-framed Norton John Player Special that he helped design.[18] Honda also experimented with a monocoque Grand Prix racing motorcycle named the NR500 in 1979.[19] However, the bike also featured other innovative features including an engine with oval shaped cylinders, and eventually succumbed to the problems associated with attempting to develop too many new technologies at once. In 1987 John Britten developed the Aero-D One, featuring a composite monocoque chassis that weighed only 12 kg.[20] In 2009, Ducati introduced the Desmosedici GP9 with a carbon fibre semi-monocoque chassis.

Single-piece carbon fiber bicycle frames are sometimes described as monocoques however as most use the components to form a frame structure (even if molded in a single piece),[21] these are frames and not monocoques, and the bike industry continues to refer to them as framesets. 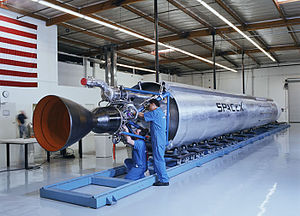 Various rockets have used pressure-stabilized monocoque designs, such as Atlas[22] and Falcon I.[23] The Atlas was very light since a major portion of its structural support was provided by its single-wall steel balloon fuel tanks, which hold their shape while under acceleration by internal pressure.