Monroe County is a county located in the state of Florida. As of the 2010 census, the population was 73,090.[1] Its county seat is Key West.[2] Monroe County includes the islands of the Florida Keys.

Although 87% of the county's land area is on the mainland, that region is part of the Everglades and is virtually uninhabited. Over 99% of the county's population lives on the Florida Keys. 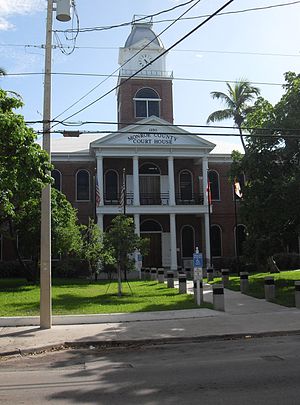 More than 99 percent of the Monroe County population lives in the island chain known as the Florida Keys.

Two thirds of the large area in what local residents call "mainland Monroe" is protected by virtue of being part of the Everglades National Park, and the remainder by the Big Cypress National Preserve in the northeastern interior. The area, officially named Cape Sable Census County Division, is virtually uninhabited. As of the Census of 2000, this area had 86.9 percent of the county's land area (2243.58 out of 2,582.00 km2 (997 sq mi)), but only 0.075 percent of its population (60 out of 79,589). The Census Bureau defines this area as Census Tract 9701 of Monroe County, Florida. With a population density of only 0.0267/km² (0.0693/sq mi), if it were a separate county or county-equivalent, only the Yukon-Koyukuk Census Area of central Alaska would have a lower population density out of all U.S. counties.[5] The only three populated places appearing on detailed maps and in the USGS geographic name database are Flamingo, Pinecrest (not to be confused with much larger Pinecrest of neighboring Miami-Dade County), and Trail City. Flamingo, located on the south coast and at the end of State Road 9336 (Flamingo Lodge Highway), is the location of the Flamingo Lodge and the Flamingo Ranger Station (with Visitor Center & Marina). 11 km (7 mi) northeast on the highway is the West Lake Trail (station). Pinecrest, located in the northern interior of the county (in the Big Cypress National Preserve) on Loop Road (given that name since it forms a loop with U.S. Highway 41 further north), hosts the Loop Road Education Center. Trail City is 6 km (4 mi) west of Pinecrest on Loop Road. Loop Road can be found on most maps as CR 94, although the roadway no longer has a numbered designation and is now managed by the National Park Service.

Between the south coast of Florida's mainland and the Florida Keys is Florida Bay, which is also protected by the Everglades National Park and contains numerous islets or keys.

US 41 touches the northeastern corner of Monroe County.

The Florida Keys Council for the Arts is the primary cultural umbrella for the Florida Keys, and serves the population from Key Largo to Key West. A non-profit local arts agency, it makes grants, operates the Monroe County Art in Public Places program, sponsors seminars, and manages the on-line cultural calendar for the region. It also manages the County's Tourism Development Council arts marketing grants and serves as a leading advocate for cultural tourism in lower Florida. In 1998, the Florida Keys Council of the Arts was designated by the Board of Monroe County Commissioners as the area's Local Arts Agency as provided by Florida Statute 286.011. Established in 1997 as the Monroe Council of the Arts Corporation. The name was changed to the Florida Keys Council of the Arts in 2001. Today the organization is the liaison among cultural organizations, all levels of government and the private sector in encouraging and promoting the arts throughout Monroe County. The council endeavors to make the arts a part of the fabric of daily life. From its inception through fiscal year end 2006, FKCA has awarded $433,916 in privately raised funds and grants to literary, visual and performing artists and cultural organizations. Add to that sum the Cultural Umbrella event funding, the South Florida Cultural Consortium Visual & Media Artists Fellowships and The Art in Public Places commissions, and the total distributed in the Keys cultural community through FKCA’s efforts come to $2.5 million to date. The annual economic impact of the non-profit cultural community in the Keys is estimated at over $22 million. The Florida Keys Council of the Arts, a non-profit,501(c) (3) corporation in a public-private partnership with local county government since 1997 serves 76,329 local residents and three million visitors annually. A ten-member board of directors guides the council, assisted by three alternate directors, two directors Emeritus and twenty-five advisory board members.

Although Monroe County has voted for the Democratic candidate since 1992, it is a competitive county in presidential elections; it was won by the Democratic Party by margins of 5% in 2008 and 0.5% in 2004. Barack Obama was the first candidate for president to win a majority, 51.7%, of the vote since George H. W. Bush's Electoral College-landslide victory in 1988.

The drop in enrollment is due to high insurance, taxes, and homes becoming too expensive for families to purchase; although the median price has dropped, the median price of a home in Monroe County remains high at $589,000 according to Zillow.com. The enrollment has been dropping for 10 years from a peak of 10,000 students. But these predictions could be changed as insurance has been lowered and property taxes could possibly be rolled back to the 2001 or the 2003 levels.[citation needed] The enrollment in Monroe County, Florida rose by 129 for the first time in 9 years, and is expected to keep rising.[16]

The Monroe County Public Library provides various programs and services to the Monroe County community, including job finding tools, children’s programs, and access to electronic books, journals, and magazines. In addition, the library has an extensive program that works to preserve the history of the Keys. This program provides library users with the latest findings and research in Keys history and other Florida history. The library is currently working on a project to digitize historical photographs of the Keys. These images can be accessed via Flickr.[17][18]

The Monroe County Public Library also offers services to visitors of the Keys. Annual visitors cards can be purchased for $30.00, and these cards give users full-check out privileges. The library provides access to PCs with internet and word processing capabilities. The library also provides free Wi-Fi for all.[17]

The Monroe County Public Library was South Florida’s first public library. The idea for the library formed in April 1892 when community members established the Key West Library Association.[19][20] The Key West Library Association named Judge James W. Locke as president, Mary A. Taylor as secretary, and J. Fogarty as treasurer.[21] By September 1892, the new library was established.[19][20] It was housed in the old Masonic Temple in Key West, and the reading rooms of the original library overlooked the First National Bank on Simonton Street.[21] The first librarian there was Mrs. William Delacy.[21] The original Key West library had 1,200 volumes, and it was funded by the dues and fees of its members.[21] 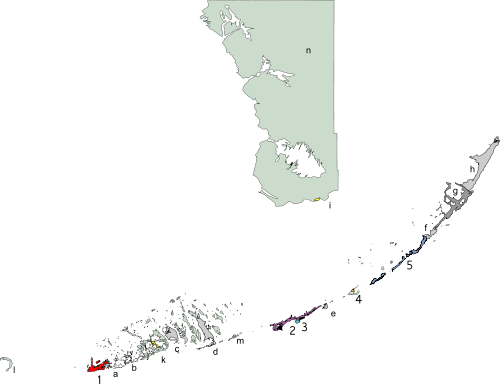