Montabaur (German pronunciation: [ˈmɔntabaʊɐ]) is a town and the district seat of the Westerwaldkreis in Rhineland-Palatinate, Germany. At the same time, it is also the administrative centre of the Verbandsgemeinde of Montabaur – a kind of collective municipality – to which 24 other communities belong. The town is known throughout the country for its strikingly yellow castle and its InterCityExpress railway station on the Cologne-Frankfurt high-speed rail line.

Montabaur lies in the Westerwald, roughly 20 km northeast of Koblenz. About 13,000 people live in the city, while the district is home to about 40,000.

Montabaur’s Old Town (Altstadt) distinguishes itself with its Gothic Revival Roter Löwe (“Red Lion”) town hall, many timber-frame houses from the 16th and 17th centuries and the great Late Gothic Catholic parish church. The mediaeval town wall is preserved in parts, among them the so-called Wolfsturm (“Wolf’s Tower”).

The Montabaur Stadthalle (literally “town hall”, but actually an event venue) is intended for various functions such as sessions, conferences, concerts, theatre and events. The historic Wolfsturm is at the townsfolk’s disposal and can be hired for their own ends.

Schloss Montabaur was until 1945 the seat of the district administrator’s office of the old Unterwesterwaldkreis, and then seat of the Montabaur regional government. Today it is owned by the Akademie Deutscher Genossenschaften (“Academy of German Co-operatives”), which has expanded it for use as a 4-star conference hotel and schooling centre for the Raiffeisenbanken and credit unions. It stands well in sight on the Schlossberg (321 m above sea level). 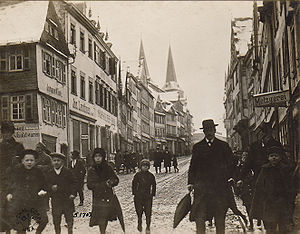 The town has a history that can be traced back to the year 959, with the Montabaur fort castellum Humbacense. The Archbishop-Elector of Trier, Dietrich von Wied, who came back from a Crusade in the Holy Land about 1217, had the humbacense castle newly built and named it Mons Tabor for its similarity to Mount Tabor in Israel, said to be the place of the Transfiguration of Jesus. Out of this grew Montabaur. In 1291, King Rudolf von Habsburg (1218–1291) granted Montabaur, as well as Welschbillig, Mayen, Bernkastel and Saarburg, town rights, so that the village became a town with its own coat of arms and a town wall.

Until early 2004, Montabaur was furthermore a Bundeswehr station with the Westerwaldkaserne, where the Raketenartilleriebataillon 350 (RakArtBtl 350) and, later, maintenance units were stationed.

The council is composed as follows: 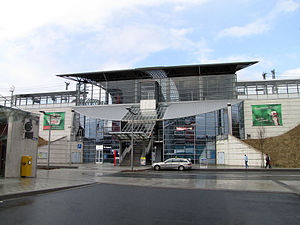 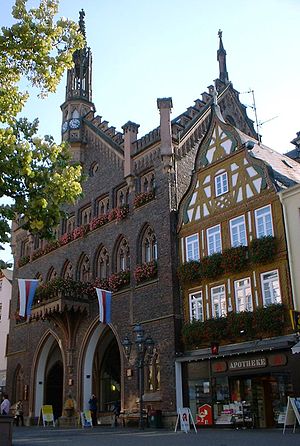 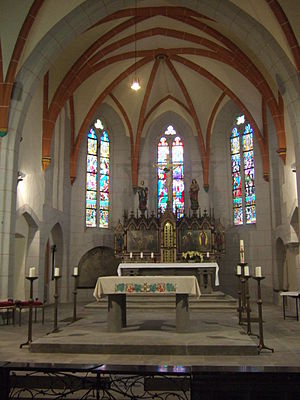 Chancel at the Catholic Church of Saint Peter in Ketten 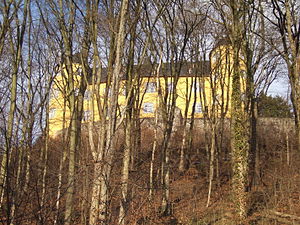 Schloss Montabaur seen from the south foot of Mons Tabor

The earliest forerunner of the building nowadays used as a Catholic parish church was a wooden church built in 940. In 959 followed another church building on this spot, this time with a stone foundation. Today’s church was built between the 12th and 14th centuries. The oldest parts of the building display Romanesque style elements, although the church’s overall character is Early Gothic. Peculiarities in the décor are a Doomsday painting above the quire arch and a stone Madonna, both remnants of the original décor, as well as a wooden Madonna from about 1450. The parish church has been lavishly renovated and now shines with a new radiance.

The churchyard’s former funerary chapel was built in 1300 and given timber-frame work on the sides and top in the 17th and 18th centuries, which housed the parish vicars’ dwellings. Today it is part of the house façade southeast of the parish church.

Furthermore, the Verbandsgemeinde of Montabaur has a partnership with an American town:

Sons and daughters of the town